Women made to become comfort women – the Dutch East Indies 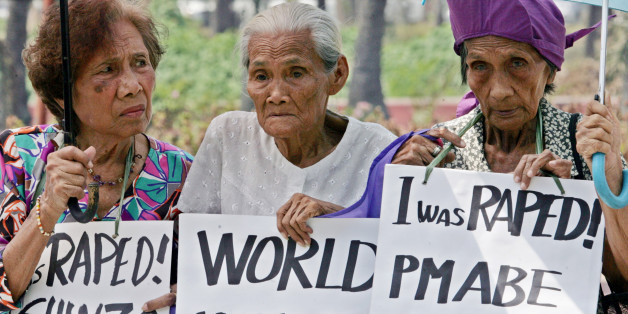 Some officials of the Japanese military forcefully transferred Dutch women and women of mixed race from the concentration camps to comfort stations and forced them to provide sexual services to Japanese officers and men. The most famous of such cases is the Semarang Comfort Women Incident. According to an article in the report of the AWF documentation committee, in early 1944, approximately 35 Dutch women and women of mixed race were forcibly taken as comfort women from (1) the Fourth or Sixth Ambarawa Camp, (2) the Ninth Ambarawa Camp, (3) the Halmahera Camp, and(4) the Gendungan Camp located in Ambarawa and Semarang in central Java. Officers of the Southern Army facilitated these moves.

According to the testimonies of women who were transferred from the Ambarawa Fourth and Sixth camps, on February 23, 1944, all women in the camp aged from l 7 to 28 were told to line up in the camp courtyard. They were then ordered to enter the camp office one by one. On the following day, February 24th, 20 were called into the office. Seventeen of them were selected on February 26, and transferred to a facility in Semarang City and forced to sign an agreement. The agreement was written in Japanese and nobody knew what she was signing. At the Halmahera Camp, eleven were taken, of which three were returned. At the Gendungan Camp, older women volunteered so that the younger women would be spared. Approximately 35 women were sent to four comfort stations in Semarang on February 26 or two to three days later. These four stations were the Hinomaru, Seiunso (or Futabaso), the Semarang Club, and the Shoko Club. At the other camps, we know that the Dutch put up strong resistance and prevented the young women from being taken away.

Top military officials found out about the Semarang incident when the Dutch petitioned an officer who came to observe the camp from Tokyo. The officer realized that the women were forced into becoming comfort women against their will, and reported on the matter. On orders from the military headquarters in Jakarta, the comfort stations were closed within two months after starting operation, and the women were liberated. Yet some of these stations later resumed operation at the same place using women of mixed race.

Before this incident, in around December 1943 or January 1944, Japanese military officials began gathering women from the Muntilan Women’s Camp in the same central Java area to be sent to a station in Magelang. They made the Dutch leader in the camp compile a list of young women who were suitable as bar hostesses. On January 25, the Japanese gathered the women on this list, subjected them to physical examination, and selected 15 who were then taken away. However, as the Dutch put up a strong resistance, the Japanese demanded surrogates, for which women who were rumored to be former prostitutes volunteered. After re-evaluation, 13 were sent to the comfort station.

After the war, a BC-level court martial brought to trial the Japanese military officials who forced the Dutch in the camps to be sent to comfort stations. Of the 13 individuals accused in relation to the Semarang Incident, the Batavia Temporary Court Martial on February 14, 1948, sentenced Army Major Okada to death. Eleven others were sentenced to prison terms ranging from two to twenty years. Prosecutors did not succeed in convicting anybody in relation to the Muntilan case, which ended in acquittal.

Court records of the Semarang Incident have survived, and the Dutch Government commissioned a study of Dutch government documents on the forced prostitution of Dutch women at the Dutch East Indies under Japanese occupation(Full Text see). According to the published report , 200 to 300 Dutch women worked at Japanese military brothels, of which “some sixty five were most certainly forced into prostitution.”

Republished contents from: the Digital Museum of the Asian Women’s Fund