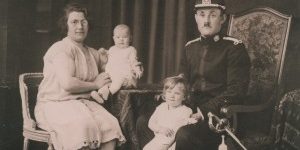 Even though the East Indies had been dominated by the Dutch, for its access to spices, since 1602. It wasn’t until 1796 when the VOC filed for bankruptcy that the Dutch administration took over and the Dutch East Indies became a colony of the Netherlands. Through the years the Dutch East Indies (DEI) struggled to be seen as more than a typical colonial power and unsophisticated back water. After years of journalists turning activist and populace vote in the Netherlands did the administration institute a new policy called the “Ethical Policy” launched in 1901.

This policy was intended to level the playing field and provide everyone, local Indonesian or transplanted European, with the same laws, boundaries and privileges. This also opened the country to import more of the European arts and culture hence making it a more desirable destination and place to begin life anew. Over the next 20 years the influx of immigrants rose annually until such a time when a national call for civil servants to re-locate to the East Indies was issued in the Netherlands.

This national rallying cry came in the 1920’s. It was obvious in the East Indies that more infrastructure was required to maintain a satisfactory way of life for the population. Civil servants enrolled en-mass and were offered not only a new start, a new house, and a contract of employment along with opportunities to grow in a career that might have been severely shackled in Holland.

My Opa (Stephanus Hendricus Gerichhausen) was one who responded. At the age of 30, a career policeman, a wife, two baby girls, and a house, what would motivate such a man to move to the tropics and a life unknown? I asked myself this question a lot and given my own personal wanderlust I assumed that maybe this was a family trait and seeking adventure was in the Dutch blood of my family. My mother, siblings, and I could easily be accused of owning such a trait.

Researching it further though I discovered that even though Opa was a policeman he had suffered an horrific fall while at the gymnasium. This resulted in a severe back injury, from which he was hospitalized for nearly a year and restricted his ability to work as effectively as he may have wanted, therefore limiting his upward potential through the ranks. An opportunity to start again in a far off land where his handicap might not be considered such a burden may have been all it took to get him and his family there. Upon arrival he was assigned a house in Bandung and quickly rose through the ranks to Police Detective First Class, a promotion that would not have been available if he had remained in Holland. Maybe this promotion and others were part of the original deal or maybe the tropical climate healed him in such a way that he was more effective in his duties than ever before.

He was later assigned as second in command at Bengkulen in Sumatra. When the war broke out he was brought back to Batavia and interned in Struiswijk prison, a prison that remains in use today in the Salemba region of Jakarta. After independence he and the family returned to Holland but he was invited back in 1950 to help develop the national police force of Indonesia. He was allowed to stay until mid 1951 and then once again was shipped out.

He died in 1976 and from all accounts he never got over having to leave Indonesia and would have preferred to live there than anywhere else. 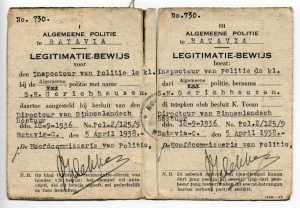