Where are the Indos today? Results from the 2012 Indo Survey. 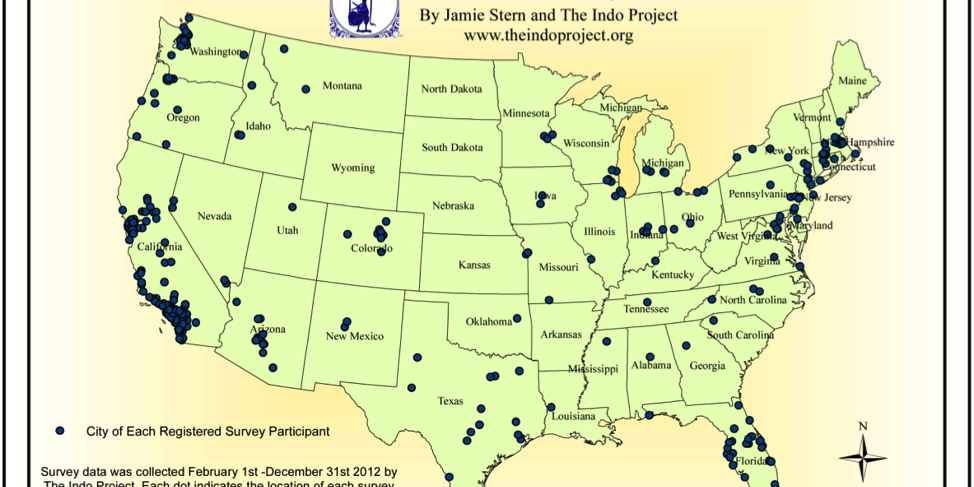 The Indo Project is dedicated to the preservation, promotion, and celebration of Indo culture and history through education and raising public awareness.  We present information that allows the world to see that we are an identifiable people, despite our world-wide dispersion due to expulsion from our homeland.  Celebration of who we are, and of our place in the world are necessary and needed elements that will benefit us all in the quest to raise awareness about the Indo people.

Through the invaluable response of individuals who participated in the 2012 Indo Survey, we have been able to establish a stronger geographical base and distribution of our scattered Indo community. This survey is allowing us to construct our demographic profile for all the world to see.   Additionally, the results of this survey have begun to answer other salient questions such as marriage patterns into the non-Indo population, achievements in education, responsiveness of the younger generation to their Indo heritage and much more.   We send a sincere and grateful “thank you” to all who participated in – what has become –a groundbreaking survey.  For those individuals interested in sharing their information to help us grow the geographical data, please contact me at jamies@theindoproject.org or visit https://www.surveymonkey.com/s/IndoMap.

The end of the 2012 survey is by no means the end to gathering data but rather just one of many steps in our journey. Some day we hope to have the input from thousands more from our Indo community.  For now, this is the first of many articles that will present the 2012 Indo Survey results.

NOTE: All results show the processed data and do not share any personal information.

“Where are the Indos today?”

Over the last few years, my work at The Indo Project Inc. has focused on tracking the patterns of Indo demographics. Our primary question at hand has been, “Where are all the Indos?” With the use of the internet through social networking platforms, we (the Indo people) are actively bridging the gap and bringing members of our culture closer together despite our distance and scattered geography. Through the 2012 Indo Survey, a survey that was conducted entirely through the internet, The Indo Project Inc. was able to construct for the first time ever, maps that illustrate our people’s geography. There were 1,061 respondents, 65% of them were from within the US and 35% from other nations. This information, altruistically given by the survey participants, is allowing us to begin painting a clearer picture of where we are as a culture and community today.

The US Indo Population

[1] Note that the method of random sampling used to gauge the population profile and collect data was unbiased; the survey was available on the internet and viewable worldwide from February 2012 through the end of December 2012. 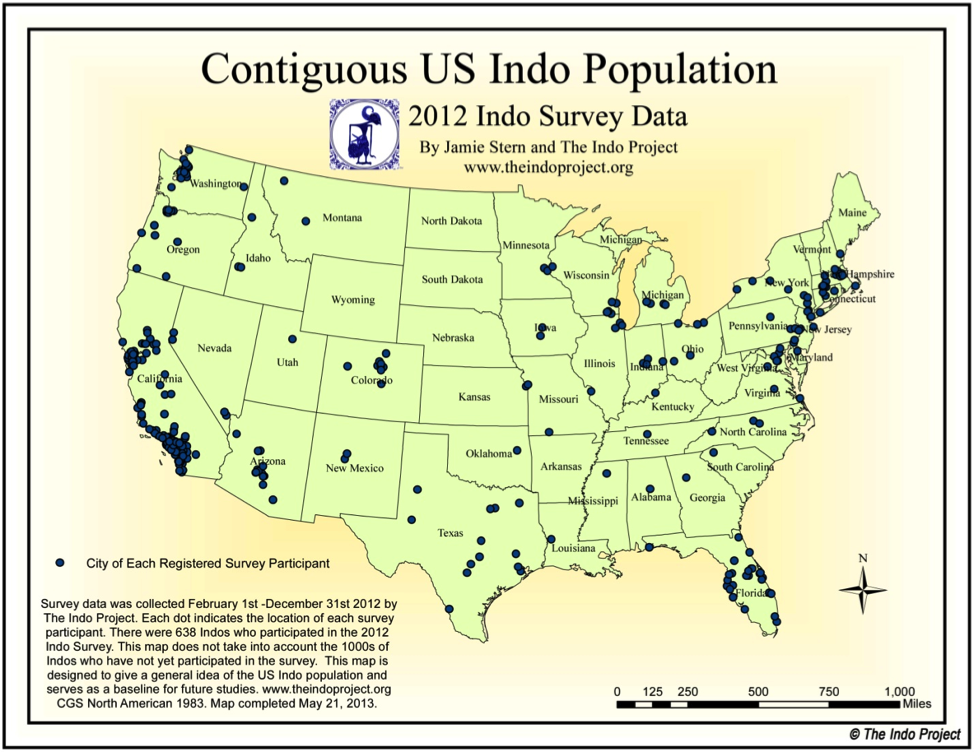 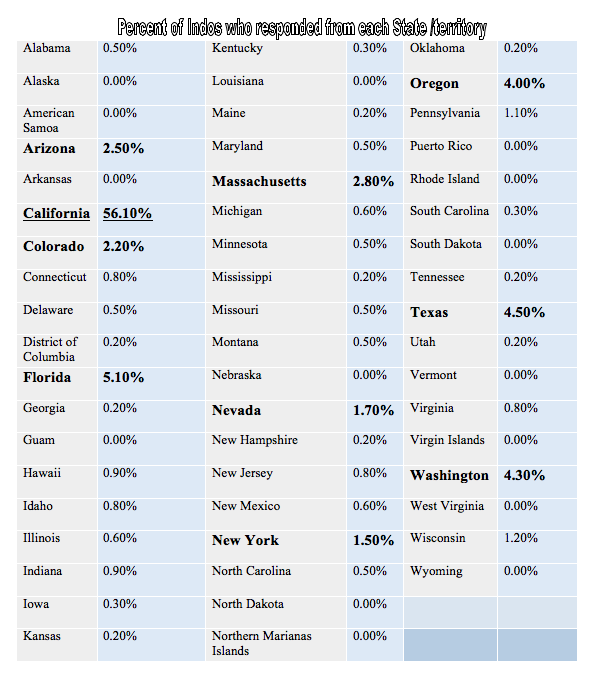 Through statistical evaluation, we estimate that we have only heard from 1% of the Indo population in the US. Though this is a substantial amount of information to begin constructing geography patterns of the Indo population, more Indo locations would enhance the effectiveness of our map. At The Indo Project Inc. we are striving to preserve the Indo history and perpetuate it for future generations. By being able to identify where Indos are we will be able to spread knowledge and awareness that will help members within and people outside of our micro-minority to recognize and celebrate Indo heritage.

If you see your state and feel it is under represented, please go to this link to add your data:

“Worldwide, what does the Indo Population pattern look like?”

Depicted in Figure 3 are the results. As can be seen, the Indos are well dispersed. Using the survey participants to cross reference each other’s answers, it became clear those areas such as Australia, Indonesia, the Netherlands (and Europe), the United States, and Canada have the most sizable Indo populations:  Many in the Indo community have so hypothesized for years.

The survey asked all participants if they knew up to 25 Indos in any of the following countries/geographical areas: 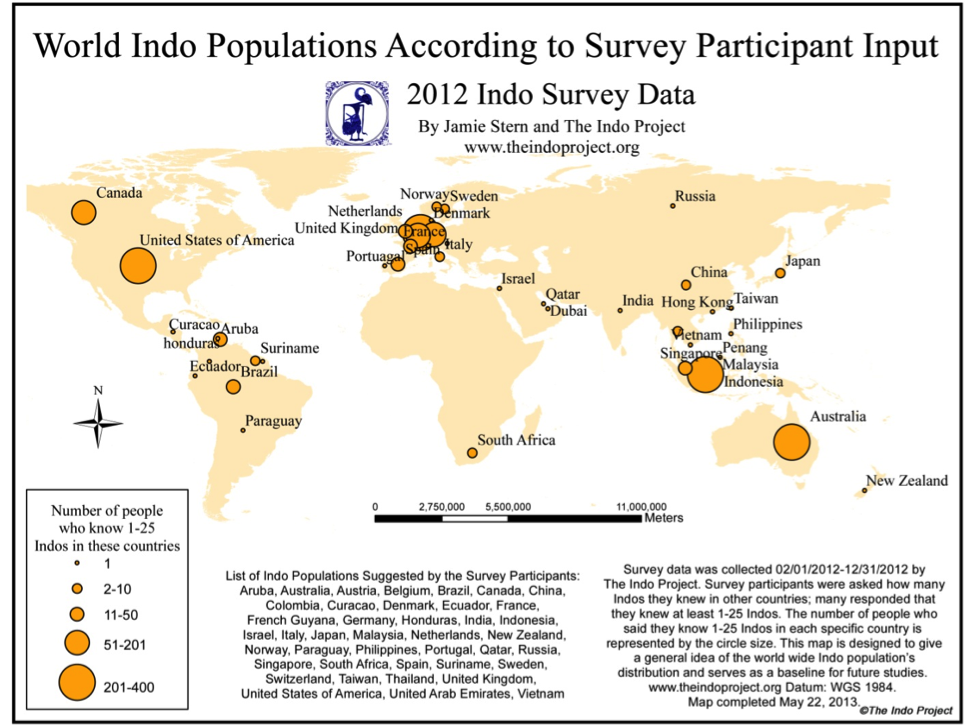 It has become very clear that Indos have dispersed globally, successfully established new homelands for their families and assimilated. This should be a source of pride because it is proof that faced with the horrendous circumstances including the complete loss of a homeland, the Indo people have prevailed. They have gone on to create new lives for themselves and provide the anchoring support for their young to thrive and continue. The Indo spirit is unrelenting and one to be celebrated. The youngest Indos alive today have their great-grandparents, grandparents and parents to thank.

If you believe an area has been under represented or you would like to help us grow the Indo community’s map data please visit: https://www.surveymonkey.com/s/IndoMap.   (It will only take 2 minutes of your time.)

Judging from these maps, it’s obvious to see that there is still an Indo presence in the world. We are still here. I have seen within our culture some who say that the Indos are dying out. Greta Kwik, in her thesis, “The Indos in Southern California” 1974, argues that this is the end for the Indo people. It must be noted that Greta Kwik wrote this dissertation in the early 1970s, which was typically the decade that birthed much of the third generation of Indos. She did not have the opportunity to see how 40 years later we, as a culture, are still present though we have changed and are continuing to change. Marriage to a non-Indo spouse has been the largest factor in our change. This has allowed much of the third generation, especially outside of the Netherlands, to be even more mixed. The third generation in the US typically has Indo heritage on one side and another heritage on the other. This change is allowing the younger Indos to be even more unique, carrying with them tremendous cultural history. Greta Kwik did not get to see the third generation rediscover their roots.

It is true that our first generation of Indos is diminishing as the cycle of life revolves. But rather than diminishing our people, they leave offspring to carry on.  Indo blood courses through their veins and today lives in the current generation. Being a member of the third generation, I take pride in the fact that my maternal Oma and Opa are still part of me; they contribute to who I am even though they are long since gone. The memories and respect for our history and heritage can keep our culture alive through education and celebration. Therefore, I do not see the Indo people as dying out, but rather as evolving. As long as the offspring know where they came from, and who it was that honorably sacrificed everything to ensure their bloodline’s chance at a future, the Indo spirit, the Indo love, and the Indo culture does not need to vanish.  Though it will evolve, it can remain resident in the hearts of the future generations.

This very first piece is dedicated with love to my Indo Mama whose encouragement and love shines so brightly it makes the sun appear dim. –Jamie 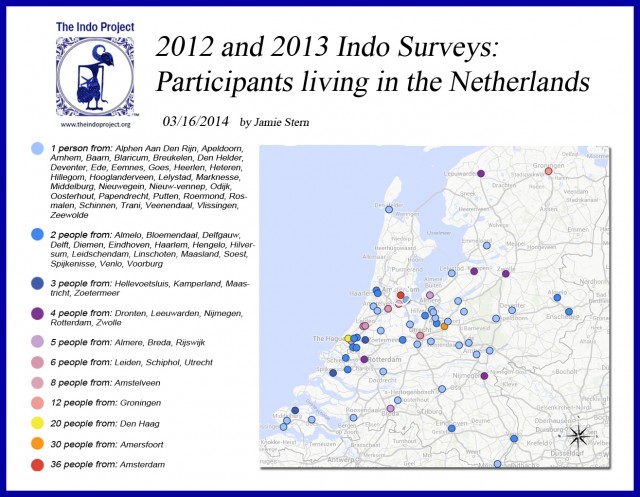 [1] Note that the method of random sampling used to gauge the population profile and collect data was unbiased; the survey was available on the internet and viewable worldwide from February 2012 through the end of December 2012.