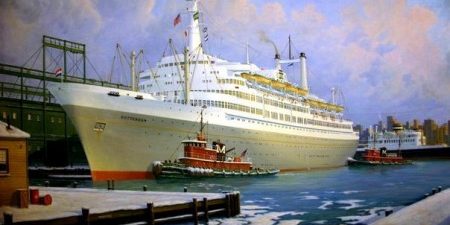 I was ten years old sitting at the dinner table when Dad came “outa the blue”and brought up the idea of going to “Amerika” and asked us for a vote!   Unanimously we voted for Amerika !! The next thing I remember we were visiting relatives, Oma & Opa in particular, and then going with Oom Adrie into town and him announcing to the local town folk of Klundert that his brother and family were going to Amerika.

We boarded the SS Maasdam on June 4 1962.  I don’t remember celebrating our departure. However, I did feel an aura of sadness on Oma’s part and Opa who was always a stern man never showing emotion.   Off we went leaving the harbor in Rotterdam and going past the jetties, and slowly leaving land into the distance.  The next morning I remember looking out on the right side of the ship and seeing the white cliffs of Dover after an overnight stop in France.  You can imagine, a ten year old boy meeting another boy of the same age, Robbie Reness.  We had a ball as kids do.  We ended up in “restricted” areas, below deck, up on the bridge, etc…how fun. I’m not sure, but I thought some seagulls followed us all the way to the States!   The trip was fun until I became”seasick” which occurred thankfully toward the end on the day before our arrival. I remember watching “Blue Hawaii” at the “bioscoop” ( theater ) with my sister and hearing the announcement that we were going to go through rough seas and, yep, ashtrays and stuff were sliding off the tables, etc…consequently I became sick to my stomach. When we arrived I did see the Statue of Liberty but remembered not being so impressed, maybe because of the weather, and it was somewhat in the distance, and it just didn’t look as “majestic” as I had imagined !

Many years later Johannes was sitting in a doctor’s waiting room flipping through a magazine.  He saw an article about President Kennedy’s assassin, Lee Harvey Oswald.  As he read this article it was revealed that Oswald had boarded the ship SS Maasdam in the port of Rotterdam after leaving Russia in June of 1962.  Johannes went home to ask his mother the exact dates and they matched up.  After rummaging through old pictures, they found a photo of his parents in the ship’s dining room and Oswald was in the background to the very left. 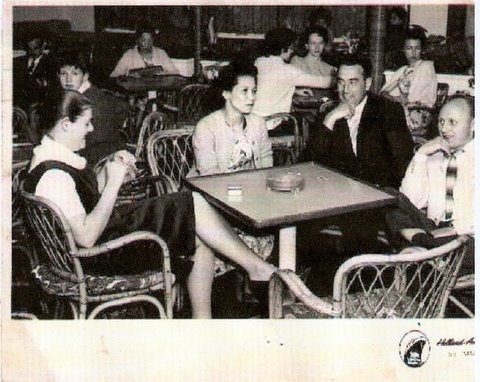