To Remember: My Oma’s Story 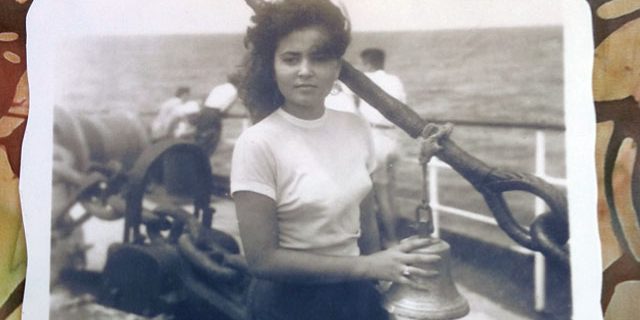 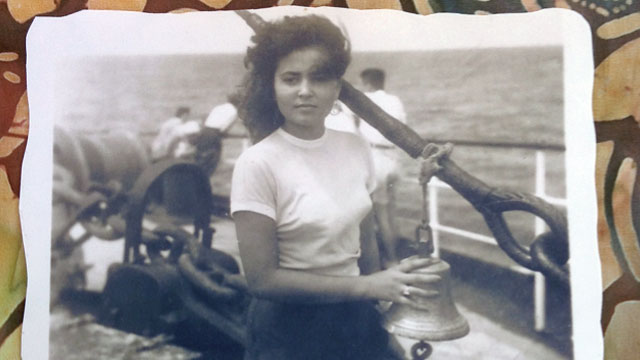 What of the children? Once resting swollen in our wombs, the weight we carried between the yawning of our hips. Tasting the salt air like we did, pushed up against the hunched horizon in liberation ships to Holland—to Australia—to the United States. How we thought we could forget the dark slash of Indonesia. The camps with spires of barbed wire, hanging dislocated shoulders behind us. ~Sierra Jacob

My name is Sierra and I am a third generation Indo. This is my Oma’s story.

My name is Hedwich Freeth and I grew up on rubber plantation in Sumatra, Indonesia. Both my parents were born and raised in the Dutch East Indies; my family was a mix of English, German, Chinese, Dutch, and Indonesian.

My father worked in the rubber factory and finished every day at five. When his work was done, a large bell in the factory would ring across the plantation letting me know my father was coming home. Even though I was a small child of three, my mother could not control me when that bell rang. I would excitedly run through the straight rows of trees calling his name.

During this year, World War ll began. On May 10th, 1940, Germany violated the codes of war and attacked the Netherlands. Because the Netherlands was in control of Indonesia, they began drafting men from the islands. My father, Jan Freeth, was one of the many men drafted to serve in the Dutch army. He was twenty-nine at the time: leaving behind four children and my mother who was eight months pregnant. I never saw my father again.

Two years after my little sister’s birth, the Japanese started invading the islands. Around this time, my mother found a ship leaving Sumatra. The captain intended to help Indo families escape to the island of Java. Hearing the news, we rushed to pack a few belongings:  A picture album, some clothing, my father’s favorite jacket, and a small pot (which later saved my life because it helped me hide my life threatening disease from the Japanese). My mother saved that jacket throughout the war and then passed it onto my older sister, Grace. When Grace died, I received the jacket. To this day, I have it hanging in my closet. I still put my extra money in the front pocket because I know my father is watching over it.

When the ship arrived in Java, the enemy was waiting for us. They took my family to a prison camp. The Japanese treated us with cruelty and nearly starved us. We ate almost anything. To supplement the rice husks the guards fed us, we would look in holes for frogs, catch small snakes, and throw rocks at birds to bring them out of the sky. Once we heard a stray cat hissing and went to see what was happening. To our surprise, there was a huge boa constrictor slithering slowly across the ground. A group of mother’s went after the snake, beating it to death with cooking spoons. After killing the snake, they hung it up, stripped off its skin, and divided it between the hungry families. I remember it being very disgusting but when you’re hungry you will eat anything. While we were trying to survive in the prison camp, I came down with malaria. I grew very skinny and had bloody diarrhea. Luckily we had the small pot from home, which I could use as a toilet. If the Japanese had found that I was deathly ill, they would have taken me away from my mother.

I can clearly remember the day the Red Cross came to liberate us. It was hot and my mother had laid me out in the sun because I was cold with chills. I was so weak that I could no longer sit up. I remember seeing airplanes swooping down very close to our camp. This time there was no screaming, no warning bells, or the following flash and shudder of an above ground raid. The pilots were angling the wings so we could see the American flag. When the line of planes crossed the strip of sky above me, all I could think about was how the steel bodies looked like the pregnant bellies of rusted birds. As their wings banked, we all shouted, “Liberation, liberation, liberation” to celebrate the bright stars and stripes. That day I dreamed of living in America. The defeated Japanese wanted us to remain quiet but some of the prisoners did not listen and began climbing the fences. The rebelling natives on the other side of the fence shot down each joyous Indo: It was the native way of removing memories of the oppressive Dutch power.

When we left the camp, we still saw signs of rebelling Indonesians. Once, on our way to school, we saw people being hung from telephone poles and others getting shot at as they tried to escape through the road ditches. We saw three Indo men hanging from the wires. Their feet, large and bloated, traced circles in the air. Instead of looking at their faces, I watched large black flies crawl out of one mans mouth. We ended up running to school and were asked to lie on the floor because it was so unsafe. At a young age I began to understand the value of listening, it saved my life many times.

After the American Red Cross came into our camp, I knew we were finally saved. When a volunteer picked me up, my dress fell off because I was so thin. They put me on a cart and gave me my first piece of candy. It was brown and when you sucked on it, it changed to red and then orange. I was a prisoner for three and a half years and was rescued when I was seven years old.

We stayed in Java until I was sixteen and then left for the Netherlands. When we arrived in Holland, the people were amazed at how fast we picked up their language. They did not realize that their own people had oppressed and ruled our small chain of islands for many years. Every week, new families arrived at our motel from Indonesia. One day, when it was snowing, we watched another bus stop in front of our motel. A tall man with dark hair emerged, slipped, and fell backwards into the snow. Seeing this, we laughed hysterically, I told my sister that she could have that clumsy ox. Five years later, in the spring of 1960, that man and I were married at Holy Barbara Church. During this time, my sister Henrietta changed her name to Grace and I changed my name to Jane (like Tarzan and Jane). Our mother never called us by our new names.

Wanting to leave the colds days in Holland, we decided to immigrate to the United States of America. A catholic church graciously sponsored my husband Rudy, sister Grace, and I. We took a boat to Chicago and from there a train to Portland, Oregon. I remember being so hungry and not being able to afford any of the expensive train food because we only had $90 to our name. At one of the stops, we got off and ordered Chinese food to take with us on the train. I remember the food being so good but we saved most of it for the long ride. In the morning, we found that the food had all gone sour—all we could afford was 10₵ hot dogs. I have never eaten a hot dog since.

I warmly remember the Indonesian water buffalo. When I was eight years old, we lived in Bandung, a large city in West Java. I was a rowdy child who loved to play with my older brothers and the native boys. One of our favorite things to do was ride the water buffalo. Every two weeks, the locals would herd hundreds of buffalo along the country roads. They would keep them in long straight lines, taking them to pasture on the edges of the city. After school, we would go and ride them. To avoid the big yellow ticks, I would balance on their protruding ribs and stand. Looking back, I would not have traded those stolen moments for anything: I was a free child able to live a child’s life.