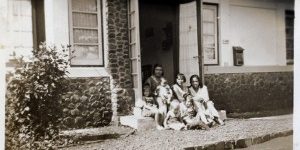 My name is Tim O’Callaghan and I am the youngest son of Maria Gerichhausen who left the Netherlands at age 11 months with her family to begin a new life in the Dutch East Indies.  They lived initially in Bandung and then Batavia for a total of 22 years. The years prior to 1941 hold many pleasant memories for my mother and her sisters and the stories recounted today always seem to bring them all to tears of laughter.

During the war years my family were held in various camps around Java including Tjideng and Kamp Makassar and it was these years in particular that were difficult for them to talk about even though when in 2003, the silence broke, they insisted it was their laughter and positive spirits that got them through (both attributes very much alive in them today). At the end of 1949, like many others, they reluctantly returned to the Netherlands on board the Willem Ruys. In 1953, my mother and her two sisters began life once again, two in New Zealand and one in Australia.

As for me, I grew up in New Zealand knowing little of my family’s past mainly because the subject was never brought up.  I went to the Netherlands at age 15 for two months and it was this trip that fueled my desire to see the world. Early in 1986, I left NZ to travel.  I didn’t return home for seven years and then left again to begin life in America.

In late 1986, I became a tour guide for a company based out of London.  We escorted groups to all accessible parts of Europe, Africa, Asia, South America, and Scandinavia. I worked primarily in Europe, South America, and Asia.  In 1988, I began working as a freelance travel writer in addition to my role as a guide.  In the early 90s, I came to America and worked as a guide for the convention bureau escorting corporate groups around Chicago and the Midwest. 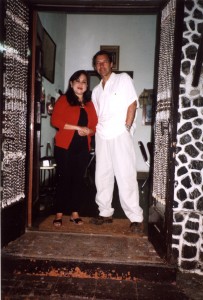 Tim in Front of Same Door Many     Years Later

In 1995, I operated an importing company which brought art from Indonesia to the Midwest.  During a trip to Indonesia (my 12th) in 2003, I became intensely aware that this country held more than a business or touristic attraction for me.  The grip the country had on me was nothing short of tangible and I set about documenting, researching, interviewing, and filming everything that was relevant to my family and the Dutch-Indonesian experience.  I spent hours talking to my mother and aunts about their lives in Indonesia. Obviously, this research and interest continues to this day.

The photo on the right was taken in Bandung at my Mum’s old house on Jalan Bima. The new owners were fascinated by the pictures I had from the 30s showing their house in colonial times. I spent the evening and dinner with them, got a tour of the house, and saw all the changes. Apparently the husband’s mother had been born in the house.

Editors Note:  Tim O’Callaghan brings extensive knowledge and travel experience to the project. With his guidance, the itinerary will provide a meaningful and educational experience for all who participate.