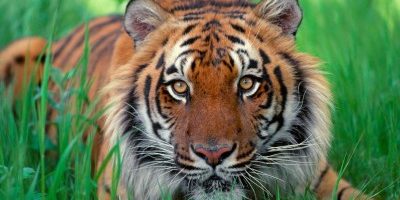 This is just one of many stories my father told me of his childhood, growing up in the Dutch East Indies.

He and his brother, my uncle “Oom” Piet, were trying to make some money since they were recently put out on the street by their father for misbehaving. The word spread that local leaders of several Indonesian villages had persuaded the local Dutch officials to hire a professional hunter to kill a menacing Sumatran Tiger that was killing their goats and pigs. My father was only twelve years old, knew the area, and of course spoke Dutch and several Indonesian dialects. Plus he needed money.

The hunter hired my father and they sat together in a tree in the jungle on a bamboo platform built thirty feet above the ground. All my father had to do was hold a two ft flashlight and wait for the command from the hunter to flip the switch. Neither one ate or drank anything to avoid spooking the tiger by the scent of human food or having to relieve themselves from drinking too much water. Directly below, in a cleared area about ten feet in diameter, was a baby goat tethered to a stake driven deep into the ground.

My father described the night as dark, hot and tense with insects and monkeys howling everywhere (of course he added his sound effects as he tells the story). Then around two o’clock in the morning, the jungle was pitch black, quiet, wet and cold. In the distance they heard the hungry roar of a tiger. By the sound of the roar It was nearer and nearer. By now the goat below was no longer trying to break free but trying to stay quiet while shaking with fear. The hunter locked and loaded a round into his rifle and just waited. Death would wait another hour, he would say. As my father tells the story, he would mimic the roar of the tiger so well, the hair stood up on the back of my neck.

In a split second, while still in total darkness, the tiger pounced upon the helpless goat. When my father flipped the switch, all he could see was the huge menacing face of the largest Sumatran Tiger he had ever seen, staring straight up at him. He will never forget the snarl and drool on the tiger’s face. The hunter calmly dropped the female tiger with one shot to the head. The explosive cracking sound of that one rifle shot echoed so loudly, it seemed to have cleared the entire jungle of all wildlife. My father was so scared, he could not stop shaking and could not release the flashlight from his grip. Before they both would climb down, the hunter threw his long knife into the tiger’s belly, to make sure it was truly dead.

I have always loved this story and I love wildlife. This is probably the reason why I like woodcarving and painting them. I tried to get a job at the Natick Audubon Society after high school but the curator was not there. So I moved to San Diego, CA and worked as a warehouseman at the San Diego Zoo. As I delivered the food orders to the Big Cats in my 2 -1/2 ton truck, I would hear that same roar. It’s a roar of hunger, not a threat, but it is still very eerie in the dark and my father had that sound down pat.

I can’t wait to tell this story to my two granddaughters Sarah and Zoe. To set the mood, I will make sure the room is dark and a lit candle on the table. I will do my best the make the animal sounds to get the real effect. Thanks for reading. I appreciate comments.

Did your parents tell you stories from their childhood lives in the Dutch East Indies? Help preserve those stories and share them with The Indo Project!  Submit your story!