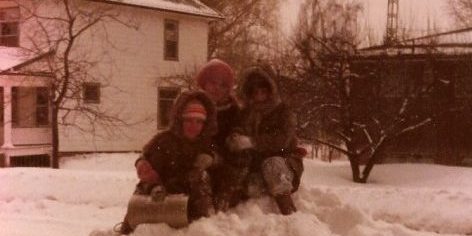 When I was growing up in Canada, I always had the impression that I was not quite the same as everyone else. For the most part I grew up in small farming communities in Southern Ontario, so things that were out of the ordinary were very noticeable.

So picture this. You are the new kid going to a new school and you open your lunch box to find what looks like a piece of bamboo. Actuality, it was a piece of sugar cane that my mother packed, together with a paring knife.  Needless to say, the teacher was not impressed with the fact that I had brought a knife to school. Thinking back to that day, it just seems the Indo thing to do. Another time she packed my lunch with rice, ketjap manis (sweet soy sauce) and sambal oelek (raw chili paste). Well some of the other kids became very interested in my little pot of sambal and started passing it around. Eventually the sambal found its way onto the hands and into eyes of the other children. It’s very surprising how much trouble a little pot like that can cause in a class room. Again, the teacher was not happy and I was no longer allowed to bring sambal to school. I guess it was just a lesson learned of the dangers of sambal in the classroom.

Despite the disaster of my two mentioned incidents, to me it is still the “Indo” thing to do. My whole life is a string of things like these that mark me as just not being quite the same as everyone else. When I demonstrate the “Indo-Finger-Rice-Cooking Technique” to my friends they laugh, but they literally eat their words when my pot of rice turns out perfect every time, without measuring anything.

Now that I am grown, I am afflicted with another typical Indo dilemma of mistaken ethnic identity.  While growing up I was associated with many different cultures, because here in Canada the Indo is almost unheard of. Once, while working, I met this woman who was a European tourist and she expressed a great amount of disappointment when I told her that I was not a Canadian Indian. She explained that she had thought that she had had a great amount of luck by meeting a representative of the great bands of indigenous peoples of Canada.

I have used these little anecdotes to demonstrate a kind of quirky uniqueness that can only be described as the Indo way. I don’t know if this is the experience of all people of Indo descent, but it sure does make you think.