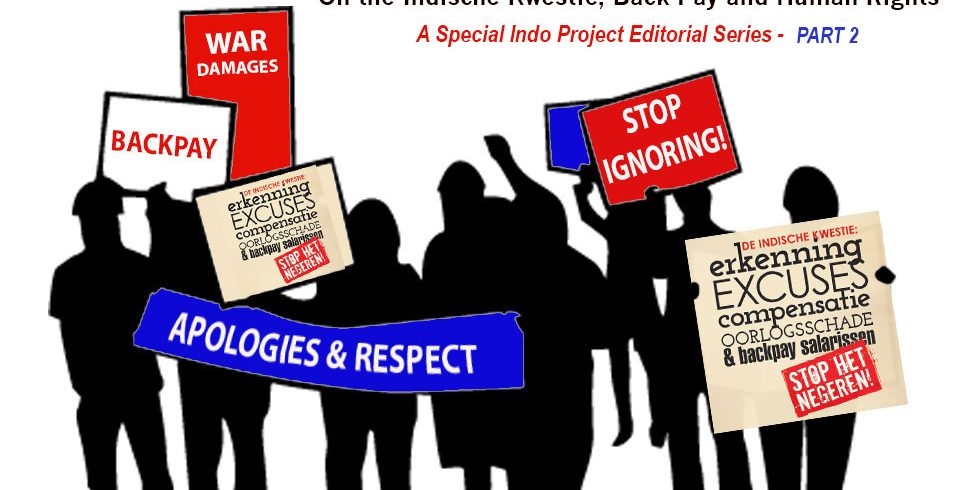 When the Dutch East Indies were liberated after the dropping of the atomic bombs in 1945, The Netherlands tried to take back its colony and conduct business as usual, notwithstanding that Sukarno had declared the country independent on August 17th, 1945.

Little did the Dutch know about the chaotic situation on the ground. Not only had the Japanese been very successful in their propaganda of hatred against European imperialists in Asia, already before the war, there was a vibrant independence movement in the making which the Dutch had tried to suppress.

Lieutenant General Van Mook who was sent over to the Indies to take over the reins as a kind of interim Governor General found himself in a tough pickle the moment he set foot on Java. The wartorn country was in dire need and a large population of starved and sick internees had to be evacuated out. Also, while Indo and Indies (i.e. Indisch, or totok) people came out of the camps, they were met with growing hostility, violence and killings by Indonesians.

Van Mook had to navigate many disaster areas while also having to negotiate with Sukarno. Sukarno may well have declared the Independence but the Dutch government in The Hague wanted nothing of it as the sentiment there still seemed mired in “Indië verloren, rampspoed geboren” (The loss of the Indies would be the birth of a disaster). Van Mook tried to strike a balance between the two viewpoints and argued in favor of a gradual independence, in the form of a Commonwealth model, which was also supported by Queen Wilhelmina.

Van Mook was unsuccessful. The Indonesians wanted independence, the Dutch refused to budge and this triggered what I perceive as the Dutch Vietnam, or the police actions: An unpopular guerrilla war in which the Dutch were ultimately defeated. Queen Juliana signed over the sovereignty to Indonesia in 1949. With one stroke of the pen the Dutch lost their empire and were once again a small country of windswept polders of farmers and fishermen.

But the colonial bill hadn’t been settled yet. Forgotten were the people who had made the empire possible in the first place. This became clear in my family early on. We never saw a cent from the Dutch government even though my great-uncle had been tortured and killed by the Japanese and his daughters had been massacred in the Indonesian Revolution. The family plantation was sold for a pittance.

We should have known better, because my father, too, was pulled into this history. Coming out of hiding at the end of the war in the Netherlands, he was drafted to serve one year in the Indies. He ended up serving more than two years.

In letters home, he compared the situation to the Palestinian one, yet what he hardly mentioned (in his letters and later on) was the trauma, seeing friends die in front of him and losing a kidney after being forced on a march through the jungle without adequate water. After arriving back home, he was thanked with a bus ride home and an… orange.

Our colonial history and everyone who was wrapped up in it has become a dark unfinished story that the country can’t seem to shake off. We call this the Indische Kwestie and it has been going on for more than 70 years. Why?

Let’s go back to the beginning of this story and back to Van Mook and see where we went wrong. Because besides his negotiations with Sukarno, he was also burdened with figuring out the backpay and war damages of all the Indo and Indies internees who had been rotting inside Japanese death camps for more than two years. There may have been a certain willingness in theory, but where was the money going to come from? The country was bankrupt.

The Dutch East Indies had been badly damaged by the war and mismanagement of the Japanese (food shortages were also prevalent outside of the camps). The plantation economy which had been thriving in the 1920s and part of the 1930s was in shambles and rebuilding was difficult considering the societal unrest and continued war, perpetrated by the Dutch. This is essentially how any form of compensation got deferred in the first place. That there were legal grounds for actual backpay and war damages, that much was clear: right before the Japanese invasion, the Volksraad (People’s Council) in Batavia (currently Jakarta) had discussed it. However, Van Mook and his staff did everything to torpedo it, so much so that in March 1947, he declared that “There was no legal ground for any compensation for war damages” even though he admitted to some “moral” obligation which led to the so-called “rehabilitation arrangement” (on paper at least) (Herman Bussemaker, Indisch verdriet (2014), p. 16).

As Dr. J.F. Meijer writes in his speech, accompanying his book Indische rekening. Indië, Nederland en de backpay-kwestie 1945-2005, the victims should have sued right then and there: “Most likely, Batavia would have lost this case and it would have forced the Dutch East Indies government to full payment of backpay” (Meijer’s speech can be found here). In subsequent lawsuits, Meijer writes, the courts have in fact confirmed the right to backpay, a collective debt that is inalienable and isn’t subject to a statute of limitations.

However, after 1949, a certain window had closed: The Dutch East Indies had become Indonesia, which the Dutch used to their advantage. After all, Indonesia could hardly be held accountable for any outstanding bills after a long and exploitative period of colonization. So when the victims fell back on the government in The Hague, The Minister of Finance Lieftinck (1945-1952), “rejected any backpay claim on the basis of the principle of territoriality: a point of view which had been adopted as early as 1945. i.e. the Dutch government was only financially responsible for its subjects who were living in The Netherlands. Even though the Indies belonged to the Kingdom of the Netherlands, the colony was autonomous in the financial and constitutional sense, and therefore it didn’t fall under the responsibility of the Dutch government” (Meijer, quoted from above mentioned speech).

This was a very bitter pill to swallow for the Indo and Indies community who had migrated to the fatherland, penniless and traumatized. While the native Dutch were quickly rewarded for their war damages (500,000 claims or so right after the war), Indo and Indies people had to pay the Dutch government for every cent that was advanced to them to pay for transport back to the fatherland, as well as clothing and housing (Bussemaker, p. 23).

Even though a special government committee had established in the 1950s that 95% families in the Dutch East Indies had experienced a “total loss”, the money was not forthcoming. The families who experienced a total loss in the Great Flood of 1953, on the other hand, were quickly reimbursed to the tune of 1.5 billion guilders (Bussemaker, pp. 25-26).

No wonder the Indo and Indies population felt discriminated against, and there was more, because as they resettled they often felt like second-class citizens: living in crammed guest pensions, they were looked down upon because of their skin color, accent and exotic food that smelled so different from bland Dutch food…

It’s important to note here that they were called migrants, not immigrants or refugees because they carried Dutch passports, but the truth is that they were not treated like their countrymen in the Netherlands. In fact, they were probably treated worse than refugees if you compare it to later waves of refugees to the Netherlands. Their suffering was mostly internalized even though there were years of back and forth with the different Dutch cabinets. Laat maar (Let it be) became the ultimate motto of resignation among the first generation but a great injustice had been done, and the pain of that has carried on and over in the second and third generation.

The backpay issue was finally “resolved” in 2015, 70 years after the war ended. There were a mere 1100 survivors who qualified… and I used to think that Cheap Trick was the name of an American rock band…

How could all of this have dragged on, you ask? Read The Indo Project’s next installment! 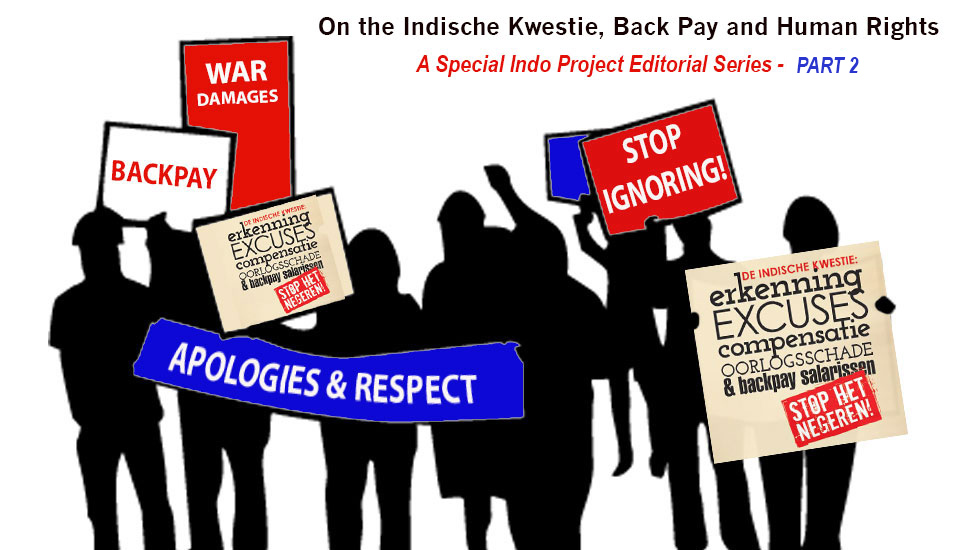