‘THE DUTCH GOVERNMENT SHOULD DEMAND AN APOLOGY FROM MITSUBISHI TOO.’ 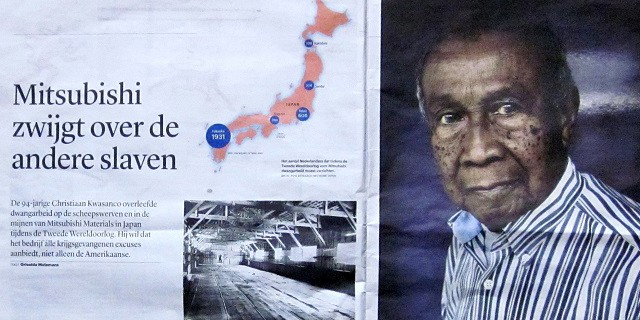 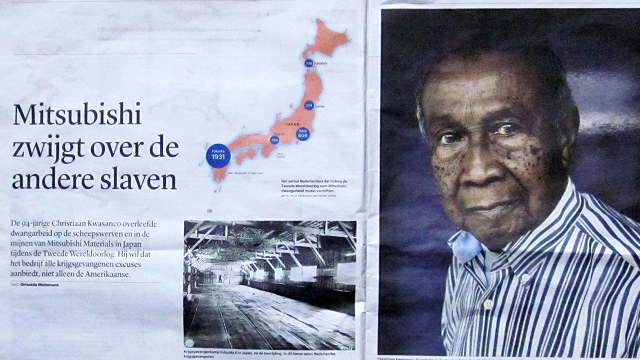 3,322 Dutch POW’s worked as slaves in the Mitsubishi mines and shipyards.

Now that the Japanese company Mitsubishi Materials has offered an apology to all US prisoners of war who had to work as slaves in Japan during World War II, the Dutch government has to step up and demand an apology too.

American research center Asia Policy Point (APP), based in Washington, D.C., is vocal in its opinion. APP has been closely monitoring the relationship between Japan and Western authorities since 1991. The center has done extensive research on forced labor at Mitsubishi’s companies during World War II.

Mitsubishi’s apology comes just before August 15th, the 70th commemoration of the surrender of the Japanese army. “It has been a long process to get Mitsubishi at the table”, APP director Mindy Kotler Smith says. “Parallel to this, the US government kept urging the Japanese government to make a straight forward apology.”

According to Kotler Smith, “The apologies have nothing to do with a sense of responsibility or sincere remorse from Japan. Thanks to the internet, all the facts about Japan’s forced labor can be checked. It was only a matter of time before Mitsubishi would be unmasked as the Siemens of Japan.”

The Japanese building company holds vast business interests in the United States. “So business wise it’s a good move by the company because Mitsubishi Heavy, one of the daughter companies, is the largest weapon manufacturer in the world,” says Kotler Smith.

Dutch, Canadian, British, Italian, Indian, Chinese, Australian and New Zealand POWs also did slave labor at the Mitsubishi shipyards and mines. In the 1990s, a delegation of the 3,322 Dutch ex-POWs filed for compensation from the Japanese company.

The Netherlands, as a consequence of the Peace Treaty of San Francisco, agreed in 1956 to financial compensation for Dutch POWs and civilian internees against final quittance—every individual claim has been declared inadmissible ever since. Under the so-called Yoshida-Stikker agreement, every ex-POW received 264 Dutch guilders (15,627 yen).

In the Netherlands, 94-year-old Christiaan Kwasanco is one of the last living ex-POWs, who had to wear the Mitsubishi logo. “We are running out of time,” Kotler Smith responds. “Now it’s up to the Dutch government to approach Mitsubishi about apologizing to all the Dutch ex-slave labourers.”

Dutch Secretary of State Bert Koenders estimates that “several hundreds of ex-POWs had to work as slaves for Mitsubishi”. He is waiting for Mitsubishi to take the initiative to apologize for the exploitation of the Dutch POWs. The research center, APP, pinpoints the number of Dutch POWs to be 3,322, based on data in the Japanese internment camp archives.

Koenders points to statements made by the company executive of Mitsubishi, which would indicate that the company is considering an apology to ex-POWs of all nationalities, including the Dutch victims or their relatives: “I would certainly welcome this apology from Mitsubishi, because acknowledgement and apologies are important.”

MITSUBISHI KEEPS QUIET ABOUT THE OTHER SLAVES

94-year-old Christiaan Kwasanco survived slave labor in the shipyards and mines during World War II. He wants the company to apologize to all POWs, not only Americans.

When Christiaan Kwasanco, 94, woke up to the breakfast news last Monday morning, he was perplexed. During a press conference at the Simon Wiesenthal Center in Los Angeles, Japanese company Mitsubishi Materials apologized to all American POWs who had to endure slave labor in Japan during World War II. In the shipyards and the mines of Mitsubishi, Dutch, English, Canadian, Italian, Chinese, New Zealand, and Australian POW’s had to work as well. “For 70 years the company kept quiet,” Kwasanco calmly reacts. “And then they won’t apologize to all other ex-POWs? This is very hurtful.”

Christiaan Kwasanco was born in 1921, in Madioen, East Java, in the former colony of the Dutch East Indies. He is of Indo-African descent: his ancestor Kwasanco, an African from the West African Gold Coast, was recruited by the Royal Dutch East Indies Army (KNIL) and lived together with an indigenous Indonesian woman on the island of Java. Indo-Africans were Dutch citizens by birth.

Christian was only twenty years old when the Japanese army invaded the Dutch East Indies. As a conscripted soldier, he was captured, made a prisoner of war, and transported to Japan.

“I was interned in the Fukuoka 14 camp and employed as a carrier in the shipyard,” he remembers. “Subsequently, I was selected to work in the coal mines.”

As a prisoner of Japan with number ‘Fukuoka 21’, he was brought to the so-called mine camp (Camp 22), where 188 Dutch had to work in the mines, together with 195 Americans, 104 Australians and 3 Brits working side by side. “We worked six days a week in day and night shifts. It was inhumanely hard work. The coal miner, who was my co-worker, was an American, whose name I unfortunately do not remember. He was so desperate that he considered breaking his own arm to try and avoid working in the mines.”

The daily breakfast consisted of a small bowl of rice porridge. For lunch, the POWs were handed a little wooden box containing a small portion of rice, salted vegetables, and bean paste. Christiaan Kwasanco particularly remembers the daily exhaustion and cruelty of the internment camp guards:

“The first Christmas we received a package from Scandinavian Red Cross employees. The Japanese told us to all sit at a table and to pose for a photo with all the delicious food. After that we were all chased away and all the food was confiscated by the Japanese.”

On August 9, 1945, the American atomic bomb was dropped on Nagasaki. Camp 22 was spared. “Had I still been interned in camp 14, I probably wouldn’t have been alive today,” Christiaan Kwasanco remarks.

“All prisoners of war were assigned to dig trenches as a preparation for a possible landing by the Allied Forces. In fact, they were digging their own graves. Later, I heard that when the atom bomb fell, 196 of the 328 Dutch prisoners of war were killed due to the deadly radiation. The Japanese guards in our camp didn’t tell us anything about the bomb. We didn’t know a thing. One day, we heard that we didn’t have to go to work anymore. The only thing the Japanese said was that the war was over. They didn’t admit that they had lost. Losing was a disgrace. We were taken to Nagasaki, where we were sprayed with DDT, had to shower and were given new clothes. From afar, we saw the landscape around the city: everything was flat, all collapsed like a house of cards.”

Christiaan Kwasanco was liberated by American troops and brought via Okinawa to Manila, where the Dutch survivors of Japanese slave labour were rearranged in army divisions. Arming them with weapons, the Dutch KNIL soldiers were transported to the city of Balikpapan in Borneo, Dutch East Indies. A civil war was raging between the Dutch and Indonesian people, to which Kwasanco was deployed. After the independence of Indonesia in 1949, he decided to stay in his native country, but due to president Soekarno’s growing anti-Dutch policy, he and his young family were forced to flee to the Netherlands by ship in 1959.

“On the way to the port of Soerabaja, we were continually stopped and checked by the police. Because we didn’t have official papers for our belongings, we had to leave virtually everything behind. Upon our arrival in Rotterdam, we were taken to the city of Maastricht in the south of The Netherlands. For nearly two years we lived there, at the boarding house Sterreplein, before we were assigned our own house in Geleen.”

For every displaced family from Indonesia, assimilation in a temporary boarding house was mandatory. Each member of the household that had a job, had to pay 60 percent of his or her monthly income to the Dutch government. This payment was meant as an advance payment for the expenses of the transport by ship, temporary housing, food, and clothes. Owners of boarding houses made a huge profit by buying the food as cheap as possible and by saving money on gas, water, and electricity.

“Once a week we were given the key of the bathroom,” Christiaan Kwasanco remembers. “There was one shower for all the families. Besides that, there were many complaints about the food. In spring, we were given winter food; all sorts of cabbages and potato-vegetables mashes. Everyone in the boarding house was complaining about the food.”

Wanting to get work immediately, Kwasanco continually visited the employment office for three months. “I could have easily started working in the coal mines in the Limburg province, but I didn’t want that. In the end, I started working for DSM’s predecessor, a chemical company, where I did maintenance work. The Dutch authorities didn’t take my former job employment into account, it was not considered equal to Dutch standards. In The Netherlands everything required papers, while in Indonesia, thanks to a lot of practical experience, I always held good jobs.”

Together with other survivors of slave labour for Mitsubishi, Kwasanco tried to file a claim against Mitsubishi back in the 1990s. This was rejected because The Netherlands and Japan signed the Yoshida-Stikker agreement—as a war compensation—where Japan paid 38 million guilders. Every ex-prisoner of war received a one-time-only amount of 264 Dutch guilders.

The payment was against final acquittal: the Japanese government would no longer carry any responsibility for any supplementary war compensation to Dutch war victims. “I feel abandoned by the Dutch government,” Kwasanco remarks. “They could have at least defended the interests of all Dutch prisoners of war and civilian internees, but obviously it was more important to do business with Japan.”

While the Japanese Honorary Debts Foundation (Stichting Japanse Ereschulden, JES) has been fighting for acknowledgement, apologies, and compensation from the Japanese government since 1991, it has been constantly thwarted by the Yoshida-Stikker agreement. JES does not know how many former slave laborers are still alive. The foundation has accumulated over 95,000 files of former prisoners of war and civilian internees, but their database is outdated.

Christiaan Kwasanco has lost contact with his fellow internees over the years, but hopes that some of them are still alive. “The news about Mitsubishi’s apology to the American prisoners of war was very much of a surprise me and it also made me angry,” he says. “It now appears like there were only Americans who had to do slave labor. Why doesn’t Mitsubishi offer apologies to the Dutch, English and Australian ex-prisoners of war? We all had to walk around three years in working clothes with the Mitsubishi logo on it.”

Text next to large photo of Mr. Kwasanco:

During World War II, an estimated number of 36,000 Allied prisoners of war were put to work as slave laborers for a large number of companies in Japan. Among them were 7,300 Dutch POWs.

As the war violence accumulated, more prisoners of war were moved from occupied areas to Japan.

Among the slave laborers were 876 Americans. According to research by the American think tank Asia Policy Point, they worked as slave laborers in four mines. To all these American POWs, the current management of Mitsubishi Materials offered their apology.

Many more slave laborers had to work for Mitsubishi, among them 3,322 Dutch and other prisoners of war from Canada, Great Britain, Italy, India, China and Australia. The nationality of about 30 prisoners of war in the Mitsubishi camps still needs to be determined.

At least 60 Japanese companies have made use of slave labor by Allied prisoners of war. Virtually all of these companies are still actively operating from the exact same locations as during the war.

“I feel deserted by the Dutch government.” Photo: Ton Toemen

Prisoner of war camp Fukuoka 6 in Japan, after liberation. Dutch prisoners of war were held in this camp.

Text underneath map of Japan:

The number of Dutch who had to do slave labor in Japan. Source: POW Research Network Japan