During WWIIHistoryMilitaryStoriesWitness to the War 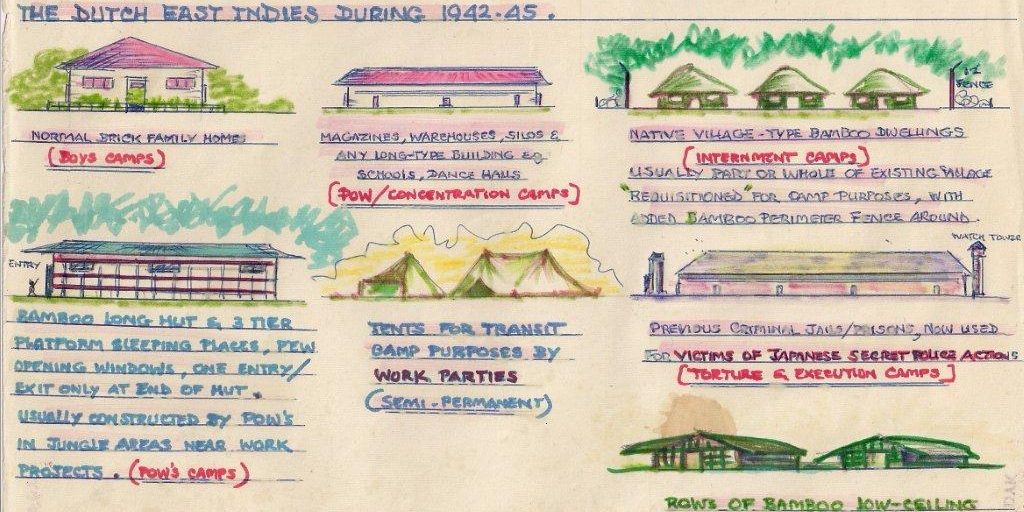 Overview of the Japanese Imprisonment Experience

The Japanese High Command on Java attempted to coerce the Indo-European members of the former Royal Netherlands-Indies Army, Navy and Air Force to enlist in the Japanese army.  A goodly number of Indos who refused were summarily executed and many ended up in camps.  Additionally, the Japanese tried to force the Indo-Europeans to renounce their allegiance to the Dutch queen and to become Indonesian citizens.  Those who refused were thrown into enslavement camps.  By early April 1942, there were a variety of enslavement centers in operation throughout the Dutch East Indies, and they could be classified in eight types:

These camps held members of armed forces of Allied nations, including Dutch, British and other commonwealth forces, Australians and Americans in addition to other nationalities such as Africans, Canadians, South Africans, Chinese, Arabs and Malays.  These men were billeted by nation of origin and service.  Later on, many civilians were imported to maintain the numbers for organized work parties after the majority of POWs were sent overseas to work on the infamous Burma-Thailand railroad, to Formosa (now Taiwan), to Hainan and to Japan itself to perform labor on docks and in the coal mines.

Every POW had to perform manual labor, either inside camp or on the outside.  It did not take long for clothing to deteriorate, and the majority of the prisoners soon wore only the military green shorts, Indonesian style clogs, and some kind of hat, often one formerly used by the military service. They made their own eating utensils.

Several camps housed inmates who were holders of high office in the former colony’s government, such as governor-general, members of parliament, commissioners, residents, administrators, lawyers, doctors, professors, clergymen, industrialists, officers of the rank of general and other dignitaries.  However, it was not long before they too were dispersed to other islands, such as Formosa, Hainan and Japan.

These held boys between the age of nine and thirteen.  After they turned fourteen, they were usually moved to civilian internment camps.  In Cimahi, there was Camp 6 for this purpose in which the author of the original article by the same title (Andrew (Andre) A. van Dyk) in “The Defining Years…..”, spent one year.

Here males age fourteen and upwards were held. These inmates were continually transferred between camps throughout the three and one half years of captivity. Working parties were assembled each and every day, every month of every year.  Such working parties labored on construction projects at various distances away from camps.  When the job was in close proximity, the group marched on foot to reach it, escorted by one or two Japanese soldiers for every 40 to 50 inmates.  However, when the job was far away, the working group was transported by army truck, some 70 men packed standing up on the flat bed, escorted by two to three guards.

These camps were for the “bad” enemy.  They held captured guerrilla fighters, many of whom had been betrayed by the Indonesian for cash awards; escaped and recaptured POWs; members of certain Allied units which caused Japanese invasion forces much grief, such as demolition and special forces units; and captured civilians who were allegedly discovered as being spies.  Eventually all of these people were eliminated, usually by means of decapitation, after interrogation by the infamous Japanese military police, the Kempetai.

These institutions held criminals already held by the Dutch before the surrender as well as persons suspected of running black market operations as go-between trafficking in medicines, food and cigaretts between Indonesians and inmates.  Also incarcerated here were members of clandestine newspapers, resistance group members, and persons who hid or otherwise aided escapted Allied servicemen.  These unfortunates would be tortured by the Kempeitai and later disposed of. Examples of these facilities were Struiswijk, Glodok and Sukamiskin.

In these camps, billeted for their own safety and protection, were members of Axis countries-German, Italians, Hungarians, Rumanians, and others-as well as some citizens of neutral countries such as Switzerland and Sweden.  These camps are not to be confused with camps by the same designation after the war, during the Bersiap period, which housed persons who were in need of protection from marauding Indonesian youth.

Here, all females except those held for interrogation in other institutions, boys under age 12 and, in some early cases, very old men were interned.  These camps held inmate population between 100 and 18,000 and were found on nearly every island all over the Indies, primarily Java and Sulawesi.

The most frequently discussed camps were the so-called Cihapit camps in Bandung, West Java, which took up most of the city and held nearly 18,000 persons.  The other infamous camp was Cideng camp in Jakarta, capital of the Indies, located on the north coast of West Java.  In this camp a brutal Japanese camp commander, Capt. Kenichi Sonei, held sway during the last years of the war.  After the war, he was executed as a war criminal for his action while in charge of this camp.

All concentration camp inmates had to be part of working parties.  Even women up to age 60 had to perform manual labor.  Inmates were used as garbage and junk collectors, sewer and drain cleaners, kitchen workers, furniture removers, clerical workers, grass cutters, and laborers to perform other chores outside camp jobs.

(Excerpts from Chapter 1 – The Defining Years of the Dutch East Indies, 1942-1949:  Survivors’ Accounts of Japanese Invasion and Enslavement of Europeans and the Revolution That Created Free Indonesia – 2003 [1996], Edited by Jan A. Krancher, used by permission of McFarland&Co, Inc., Box 611, Jefferson NC 28640 – www.mcfarlandpub.com)