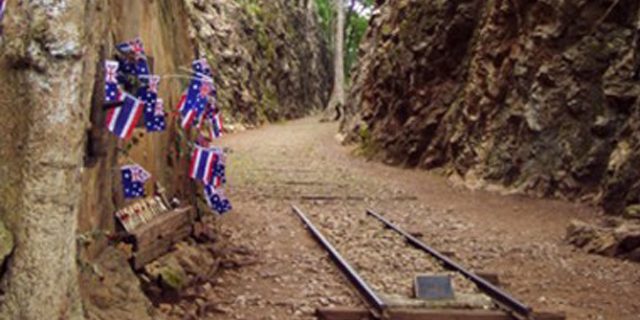 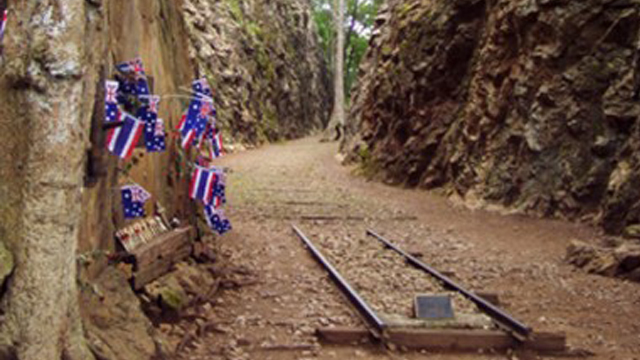 Book:  Ambushed under the Southern Cross

Highly decorated Capt. George W. Duffy has authored the book “Ambushed under the Southern Cross . . . The Making of an American Merchant Marine Officer and His Ensuing Saga of Courage and Survival”.  Among several of his experiences, he also recounts his three years of imprisonment in ten Japanese labor camps scattered throughout South East Asia on the islands of Java, Singapore and Sumatra.  The following is an account of an incident in his life on Sumatra, used by permission.

Whenever an American Fire Department or Police Department is struck by tragedy, the out-pouring of public grief and sympathy is overwhelming.  Thousands of their fellow officers from all over the United States, including bagpipe bands and color guards, travel to pay their last respects and take part in the funerals, memorial services, and burials.

On such occasions my thoughts always revert to the last twelve months before the Japanese surrender in World War II.  In those days, I and about 5,000 Allied military personnel – mainly Dutch and English, with a little over 200 Australians and 15 Americans – were held as prisoners of war by the Japanese.  We were engaged in the building of a narrow-gauge railway across the central portion of the island of Sumatra (in the Dutch East Indies, ed.), now known as Indonesia.

The northern terminal was the city of Pekanbaru (new Indonesian spelling).  Thereafter the project became known as the Pekanbaru Rail Line.  In more recent years, a Dutch author dubbed it “The Death Railway Through the Jungle.”  Indeed death was no stranger here.  We were overworked, underfed, provided with little medicine, and subjected to constant physical and mental abuse by our Japanese overseers. A “hospital” for prisoners with malaria, dysentery, pellagra and beri-beri  where they languished,  was simply a dilapidated bamboo-framed, thatched roof barrack.  The sick were “housed” here, awaiting their eventual death.  Once in a while, a man recovered his health and returned to the daily camp routine, but that was an exception.

In April 1945, I was living and working in the Base Camp where this “hospital” was located. Deaths that month totaled 106 and an additional 14 died out in the construction camps along the line, as recorded in my journal.  My job, together with other officers, was to cut down rubber trees and carry them into camp.  There, another group sawed and split them for the cookhouse, and the locomotives running on wood burning boilers. Rarely did the full complement of 30 report to work.  Everyone was afflicted with malaria which reduced our number to about 20 on a given day.

We worked in teams of three – an axe man and two carriers.  Rubber trees grow tall and straight. The wood is fairly soft – and wet.  Each of us became quite adept at felling a tree and we even had contests to see who could most accurately predict the line of fall.  One man chopped while the other two went in and out of camp.  Burlap bags were used to protect the log carrier’s shoulders and also hide an occasional smuggled dried fish, or fruit, or vegetables, purchased from a passing native vendor.

The “wood party” therefore offered an invaluable, though risky opportunity for its members to create a “black market” inside the camp.  We always had a single Japanese guard with us.  Due to the nature of the work, we were spread throughout the plantation.  So most of them simply spent the day sitting by our camp fire reading the pornographic books they all carried, or  simply snoozed.

The railway workers carried their mid-day meal with them when they left in the morning.  We, on the “wood party” came into camp at noon for our meager cup of steamed rice and a watery soup made of tree leaves. Before we went to work in the afternoon, someone from the “hospital” would tell us how many deaths had occurred in the previous 24 hours. For each deceased, four of us would be detailed to carry the straw-matting wrapped body to the cemetery, adjacent to the plantation. Out of respect for the dead, we covered our nakedness with a shirt or jacket as the sole item of daily apparel was a Japanese-style loincloth.

Several prisoners labored at the unending task of digging graves and burying the remains.  Most of the time, we never knew the identities of the lost souls whom we carried over the creek and up the hill.  Only if a prisoner had five friends was he accorded a proper burial, generally at the end of our work day. Such was the case on May 29, 1945, less than three months before V-J Day.  Sidney M. Albert, one of the cooks on our ship, the American Leader, had died.  In the evening, Stan Gorski (our ship’s bosun) a U.S. Marine, an English soldier and I, were pallbearers.  Another shipmate, Carl Kalloch, carried the shovels and the cross.

All clergy had been left behind on Java when we came to Sumatra.  The committal service for anyone off my ship became my responsibility.  It was brief:  The Lord’s Prayer, the 23rd Psalm read from a borrowed Bible.  Lower the body.  Fill the hole. Erect the wooden cross and, under the watchful eyes of the Jap sentry, trudge back to the gate and inside the barbed wire camp before dark.

The cause of Albert’s death was malnutrition, or as it was called out there, “beri-beri”.  Lack of protein and vitamins caused kidney malfunction which resulted in fluid retention.  A victim would first notice a soft swelling of his hands and feet, which eventually progressed to the torso.  He ballooned in size to as much as 250 pounds, losing mobility and putting a severe strain on his heart.

My exertion in carrying him to his burial site so sapped me that the next day I suffered “the worse attack of malaria that I’ve had yet.  I worked for 31 days without a break, most of the time axe work, and when the “old bug” hit, I “went down for the count”.  It was the whole package: fever, chills and sweats.  I never imagined it could be so bad. (Notes from my journal.)

Albert was 49 years old.  Out of the 700 who perished, the average age was 37 years and 3 months.  Five were 57, one was 58, another 66.  They probably had wives and children. Yet when most of them died they did not have five friends to mourn for them.  On Sumatra there were no columns of fellow soldiers, sailors, or airmen.  No color guards, no pipers nor drummers.  No flowers.  No eulogies.  Death on Sumatra rarely arrived as a thunderclap.  It moved slowly and inexorably through the ranks at the “hospital”. The men who died knew it was coming and there was nothing to prevent it.

It is a great mystery, isn’t it ?  The 700 unfortunates of Sumatra are just as dead as those American firefighters and police officers. By contrast, how fortunate were those 7 US men to have their lives celebrated with such pomp and ceremony.  How fortunate indeed are we all to be living in a civilization that prides itself on such responses.  How fortunate that we won the war! 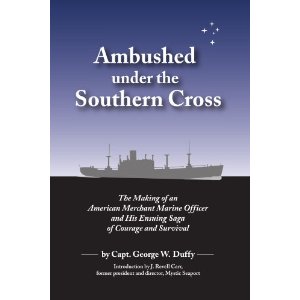