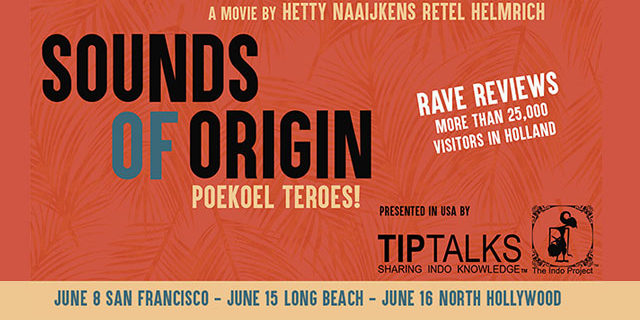 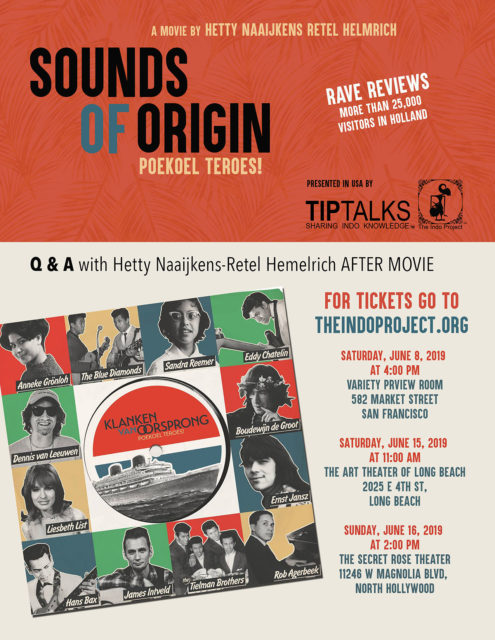 The USA Premiere of Klanken van Oorsprong – Sounds of Origin

GET YOUR TICKETS AND RESERVE YOUR SEAT BY MAKING A DONATION:

Klanken van Oorsprong – Sounds of Origin will be presented at the two locations below. Hetty Naaijken will be there in person after each screening to conduct a Q&A.

The Art Theater of Long Beach

To get tickets for the LONG BEACH event via Eventbrite or TIP Website.

The film will also be shown in San Francisco on June 8, 2019 at the Variety Preview Room at 4:00 p.m.  To get tickets for the SAN FRANCISCO event, via Facebook or Brown Paper Tickets.

For those of you who are lucky enough to still have your parents with you, please consider bringing them to this film. June 16, 2019 is Father’s Day and what better gift then to spend the day with him reliving his youth? It promises to be an event not to be missed. An opportunity to share your parents’ memories of a youth filled with Indo rock and roll, dancing and fun.

TIP is looking sponsors for this TIPTalk event. If you or someone you know is interested in sponsoring this event, please contact TIP by email  – click here

See you at the movies!

This film is uniquely tied to our shared heritage. As discussed in a recent article in The Jakarta Post, Indos brought a love of rock and roll music, knowledge of the newest American rock and roll from the Voice of America and a talent for stringed instruments, like the electric guitar, with them to the Netherlands. Groups like the Tielman Brothers, Anneke Grönloh, the Blue Diamonds and Sandra Reemer reached a wide audience in the Netherlands entertaining our parents’ generation and fostering a love of rock and roll among our youth. Once on Dutch soil, Indo bands like The Tielman Brothers and The Crazy Rockers immediately got a lot of love from Dutch youngsters. Also, singers like Sandra Reemer, Liesbeth List and Boudewijn de Groot had hits atop the Dutch pop charts. Anneke Grönloh and Ruud & Riem de Wolff (The Blue Diamonds) even gained international fame, as did the Rock and Roll Hall of Fame rockers Eddie and Alex Van Halen. Although all these musicians found varying degrees of success in different musical genres, they all share common ethnic roots.

Although all the featured musicians found success in many musical genres, they have many things in common. After suffering the ravages of war, then having to start all over in a foreign country. To help cope, many turned to their music as an outlet. The documentary “Sounds of Origin” is a mosaic of stories about the power of survival in difficult circumstances, the roots of the portrayed people and the search for their identity, interspersed with never-before-seen archival material of both musical performances and the colonial era of Netherlands East Indies. Hetty Naaijkens – Retel Helmrich shows the audience how Dutch-Indo musicians managed to assimilate (with a hint of nostalgia), and how they changed the Dutch musical landscape and far beyond, without even knowing it.

Ms. Naaijkens-Retel Helmrich will be attending the premiere of her film in California. A question and answer session with the producer and director will be a part of premiere. Ms. Naaijkens-Retel Helmrich is an Indo scholar who was born in Bandoeng after the end of the second world war. She has dedicated a substantial part of her professional life to the historical documentation of our roots in the Dutch East Indies. We are honored to have such a fiercely active Indo attend the presentation of Sounds of Origin here in Southern California.