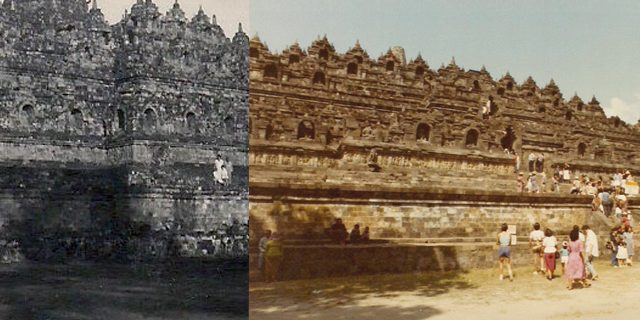 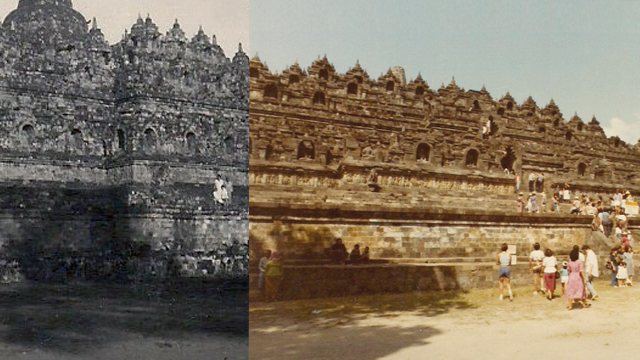 Travel with The Indo Project Board Member Emeritus as he takes a sentimental journey back to his birth land Indonesia, part one of two.

Since my emigration to the United States in the early 1960s, I always have had the urge to revisit the land of my birth, the former Dutch East Indies, now Indonesia.  That opportunity was afforded me when I was contractually employed in Saudi Arabia (KSA) as an Environmental Health Specialist from 1982 to 1985, hired by Bechtel Engineering, one of the largest US engineering firms in the world. I worked there as an “expatriate,” assigned to the Saudi Royal Commission and was fortunate to be here on “family status.” My Indo spouse, two sons (Sheldon 12 and Glenn 14) and three year old daughter Corinne, could therefore come and join me.

During an annual “rest and recuperation” (R&R) vacations at the beginning of July 1983, we departed from Dhahran airport via Bangkok to Jakarta, Indonesia. My objective was to combine pleasure and explore future potential business opportunities. Our ultimate, grandiose plan was to travel from east to west Java by automobile and visiting conventional tourist attractions. And, of course, ultimately, pay a visit to my place of birth, Kabupaten (Regency) Malang, in East Java.

Upon arrival, we were picked up from the airport by the driver of guesthouse “Belruvya,” where we made prior reservations. We stayed a few days in Jakarta, exploring the town as good tourists would. My first impression was how crowded the city has become since I left in 1956 for the Netherlands. Ambient temperature was almost unbearably high with stifling humidity to boot.

Two day later, we departed by plane to Soerabaja, East Java, where I met up with Prof. Suterjadi, director of the Airlangga University. I was in the process of writing a research protocol regarding the beneficial use of the herb “koemis koetjing,” cat’s whiskers (Orthosiphon stamineus), focusing on women, troubled by premenstrual stress syndrome. This is one of the thousands of “jamus” (Indonesian herbs) used by the Indonesians to treat certain health conditions. Our point of discussion was the potential of engaging in exporting herbs to the US. In passing, he notified me of an upcoming International Congress on Traditional Asia Medicine in town. He invited me to share the results of my study. 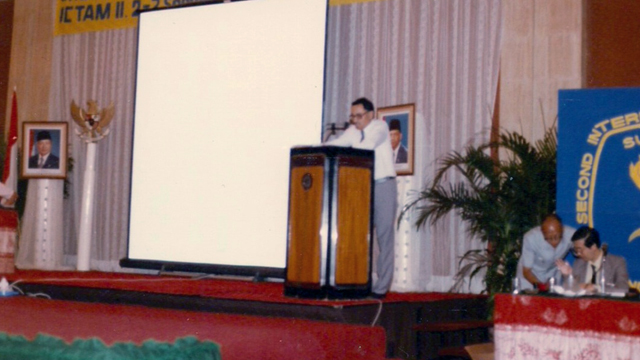 After this successful meeting, we traveled south by taxi to the small town of Pandaan, idyllically located between Malang and Soerabaja. Again, I made prior arrangements with Rudy Soekanto, an Indonesian with whom I became acquainted in KSA where he was employed as expatriate “guest worker” as well. His family was very accommodating. However, before we came, he was transferred to Cilacap, a town on the south coast of West Java.  He was kind enough to let us make use of his Colt Van, driven by Beddi, his chauffeur, during our vacation in Indonesia. He and his family came along with us all the way to Jakarta.

While at his residence, we made a quick foray to Tretes, the famous vacation resort and tourist attraction in the mountains north of Malang. The ride was gorgeous and we enjoyed the scenery. But there was no thought of swimming. The pool water was so darned cold that even our brave anaks didn’t dare to take a dip.  So be bugged out and returned to Rudy’s place. The next day, after a great gado-gado breakfast, we made our official trip to Malang.

Our first stop was at my childhood home on (former) Oro-Oro Dowo street, Gang delapan (alley no. 8).  Here I spent my early childhood until I was about 14 years old. The street has been renamed in the meantime to Jalan Brig. Jen S. Riadi, a famous Indonesian military officer.  Obviously lots of pictures were taken among which were a few of the boys standing adjacent to our “faithful” soemoer (water well), still producing fresh and clean water.  Then we proceeded down the slope, taking a few shots along the bank of the Kali (river) Brantas, still flowing a distance behind the residence.  How much fun I used to have swimming in this stream!

This residence belonged to my Indonesian Grandma Poenisah, married to Johan Klaare, the Dutch ancestor on my mother’s side, and later occupied by my Dad. An Indonesian owner took possession of the property after our “repatriation.” I am not sure about the particulars regarding the change of ownership. However, during a guided tour through the house, then leased out to students of the outer islands, I noticed to my great surprise, that the new owner never took the trouble transferring the utility accounts to his/her name.

Both the electrical (syarat-syarat penambung listrik) and the water account (daftar pencataan penunjukan ukuran air minum) were left unchanged all this time. So ironically, the original owner’s name still showed up on the current cards as tuan L.A. Krancher, my Dad. Being a genuine, “true blooded” American tourist, I quietly “appropriated” an old, expired copy of each, still hanging there. I have these in my possession in a secure place ever since, as a great memento of our journey to Malang’s past.

Lots of memories, good and bad, from my youth in this home, flooded my mind. Some good ones are flying kites from the roof of an adjoining building, swimming in kali Brantas, enjoying mangos from the Indonesian neighbor’s tree, the game oeboelen (tossing cards in the air) with the boys of the “kampong” (native village) and other such innocent and fun past times.  The “dress du jour” was the traditional so-called “hansop,” (tjelana monyet) a one piece, loose fitting “jump suit” with a huge pocket in front to collect frivolous objects. All of these experiences I recounted to my sons so they will be aware what good ol’ Dad was up to in his youth.