Rising from the Shadow of the Sun: A Story of Love, Survival and Joy. 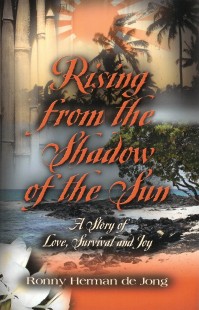 Rising from the Shadow of the Sun, A Story of Love, Survival and Joy brings the horror and losses of World War II on Java off the battlefields and military POW camps and into the world of Ronny Herman, who is barely three years old in 1942 when the Japanese conquer the island of Java and force her family into prison camps.

Ronny’s father Fokko, a pilot with the Dutch Naval Air Force (MLD), escapes with his squadron on a ship in the dark of night, hours before Japanese submarines encircle the island. Working under British command in Ceylon, Fokko’s story is chronicled along the same timeline as that of his wife and children. For almost four years they have no contact whatsoever.

In the third year of the war, Netty contracts amoebic dysentery, and a diphtheria epidemic is followed by camp sores. The Japanese withhold all medication, although distributed by the Red Cross, and the living conditions worsen. Ronny tests positive for diphtheria and has to leave the camp to go to a hospital. She returns just before the women are evacuated to a camp in Semarang. Many women and little children die during the 72-hour transport in closed cattle cars without food, water or sanitary provisions.

During the many air-raid exercises and bombardments day and night, Netty and the girls hide in an underground shelter. Netty, always positive, always hoping the end of the war is near, consoles her little girls and tells them that their pappa will come home soon.  Cholera breaks out in the camp. The girls get sick. All three of them contract beri-beri; Netty and Ronny have wet edema and Paula dry edema: she is a mere skeleton in 1945.

In her diary, smuggled through the camps at the risk of being killed had it been detected, mother Netty gives an accurate account of the Japanese invasion and the lives of women and children incarcerated under the brutal regime of the Japanese. She describes the years of physical and psychological suffering, but also the hope, faith, solidarity and resilience that remain alive among the imprisoned women, who are desperately trying to survive and protect the lives of their children.

In Part Two of the book, Ronny takes the reader on a roller coaster ride of her life as it evolves, first in Soerabaja, then in the Netherlands, where, ten years after the end of the war she studies English Literature at Leiden University, gets married in the course of two weeks and travels to New York with her husband for an eighteen-month honeymoon in the United States. In 1972, they return as immigrants to California with two daughters, a son and a dog.

The close-knit family serves as a strong basis for the ups and downs in Ronny’s life. The risks she dares to take, the dreams she fulfills, the disappointments and rejections she endures, and the love and compassion she shares with many others make for an interesting story. Balancing her responsibilities at home with a secretarial job at NASA in La Cañada-Flintridge, then fashion modeling and commercial acting in the greater Los Angeles area, and communicating on a deeply
emotional level with her dying patients and their families as a patient-care hospice volunteer for six years, Ronny also serves as moderator of her church.

A move to the Big Island of Hawai’i opens up another treasure trove of stories about a spiritual weekend in Kalaupapa, the leper colony on the island of Moloka’i, her pilgrimage to Indonesia, the place of her birth, and the publication of her first book in 1992, based on her mother’s diary, titled In The Shadow Of The Sun.

Then, in the year 2000, declassified NARA Files, official Japanese War Crimes Files that indicate that the Japanese Imperial Army had orders to kill all prisoners on all islands in Asia starting in September of 1945, are included in the final chapters of Ronny’s second book, Rising From The Shadow Of The Sun: A Story Of Love, Survival And Joy.

A glossary, a complete List of Camps in the whole archipelago as well as Reading Group Questions complete this inspiring story about a little girl who, thanks to the love and dedication of her mother, survives the hardships of her early childhood in Southeast Asia and goes on to set goals for her life and make her dreams come true, culminating in United States Citizenship.

Published in March, 2011, Ronny’s book is available from Amazon.com, Amazon.ca, Amazon.co.uk., BarnesandNoble.com, Booklocker.com and the Author.
Ronny will welcome comments and questions on her website:
http://www.ronnyhermandejong.com/