More Revolusi Controversy in the Wake of Rijksmuseum Exhibit 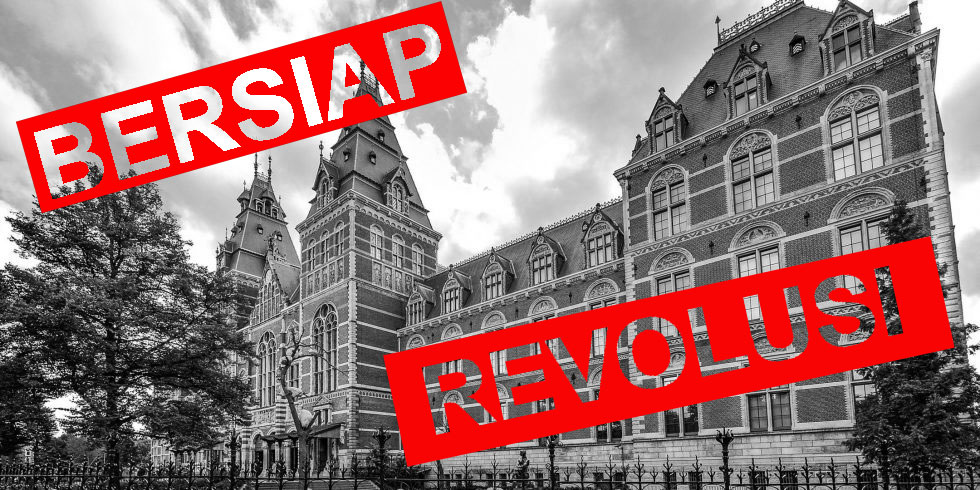 We’ve all been there. Just go back in time and think of your elementary school antics. In the
schoolyard someone lashes out and says But you’re a moron. The answer that may come back
when there is no good answer: No, you’re a moron. And then there is always that line of last
resort and call for pity: But you started it.

This is exactly what has happened in the last few weeks in the Netherlands. The country of Spinoza and Rembrandt has turned into a playground of name calling and Twitter insults back and forth.

To refresh your memory: One of the Netherlands’ most foremost museums, the Rijksmuseum in Amsterdam, made a brave but risky attempt to tell the story of Indonesian independence in an upcoming exhibit. This independence was not without bloodshed and resulted in the torture, maiming and massacring of many Dutch, Indo, Ambonese, Menadonese and Chinese groups who were suspected of being loyal to the colonial regime. Both Dutch and international historians have referred to this period as the Bersiap, which was the rallying cry of freedom fighters to hunt down the colonizers.

Some of these colonizers were emaciated women and children who came out of the Japanese internment camps and were on their way home to the Netherlands. Others were Chinese shopkeepers who may have had a Dutch clientele. Still others might have been the Indo or Indonesian wives of Dutch officials. Many of them died horrible deaths in what was a flagrant violation of the Geneva Convention.

For Indonesia, the Revolusi was a time of shaking off the shackles of three centuries of Dutch colonialism, and the bloody day of the actual revolution in Surabaya (October 28th, 1945) has been named the Day of Heroes. The darker side of that day has been entirely whitewashed in Indonesia. Thus, very few Indonesians know today that some of their freedom fighters were also cold-blooded killers who didn’t seek out conflict with soldiers but were hunting for civilians.

In my book Silenced Voices (Athens: Ohio University Press, 2008), I wrote how two of my family members, Willy and Joke Francken, two young girls in their teens, were assaulted and massacred in the Gubeng Transport during that fatal day of the Revolusi in Surabaya.

History is never black and white, but that seems to get lost in our times of cancel culture and tribalism. While Willy and Joke died with gaping holes in their young, starving bodies, their younger brother Harry was saved by a freedom fighter in the same bloodthirsty crowd.

A few years back, I visited the street where this massacre happened. There is nothing there to remind people of this bloodbath, but all over Surabaya you can find statues of freedom fighters or so-called pemudas. Interestingly, the Bersiap may well have been the greatest massacre of Dutch civilians in Dutch history, but there is no Bersiap monument in the Netherlands either. All that remains is the overwhelming number of white crosses sprinkled all over Java with the dates of the war and Bersiap on it.

One could view this as a very successful attempt to write these victims off as collateral damage and the price the Netherlands paid for colonialism. As a result, there is a high chance that, in another century, these victims and their suffering may be forgotten altogether.

The Rijksmuseum rubbed salt in the wound of these victims and their families: Upon the advice of an Indonesian curator, the term Bersiap was to be omitted from the upcoming Revolusi exhibit because in the mouth of Dutch people this was considered “racist” vis à vis the freedom fighters, who, in the Dutch context, were allegedly portrayed as savage and primitive.

The potential omission of the word Bersiap caused an uproar among the families of the victims as they saw it as a further whitewashing of the record. The director of the museum (Taco Dibbits) tried to control the damage by declaring publicly that the word would be included.

This then triggered the schoolyard antics I’ve opened this piece with, for not only did Remco Raben, a historian of the exhibit, declare that the museum director was pressured by extremist and right wing factions in Dutch society, but also by what he stereotyped as a fringe element (i.e. the families of the victims) who were no more than a “duister clubje” (“a dark/sinister little club). I myself happen to be white but many descendants of the victims are of mixed race, or Indo heritage, and it’s funny, or maybe Freudian, that those who are quick to gaslight others with the word racism can actually say something racist themselves.

The inclusion of the word Bersiap also triggered the you started it rhetoric. Because shortly after Dibbits did his best to soothe the noise that came out of the Dutch colonial closet, Jeffry Pondaag of Stichting KUKB went after the Rijksmuseum once again for including the word Bersiap, with the argument that the Dutch were the colonizers and occupiers and basically had it coming to them after more than three hundred years of colonialism.

He also argued that because the Bersiap violence happened under Dutch rule (the Dutch finally granted Indonesia independence 1949, and not in 1945 when Sukarno read his independence Proklamasi), the victims are a Dutch problem, not an Indonesian one. What he left out is that the Dutch were killed by Sukarno’s independence fighters, and while Sukarno may have silently condemned the violence, he did nothing to stop it because it served his independence agenda.

At the same time, the Dutch themselves are their own worst enemy: In a country that has become a beacon of free speech, freedom and liberalism, colonialism and colonial exploitation don’t sit well with the image The Netherlands wants to present to the world since the 1960s.

Dutch historians have done their best to condemn all forms of Dutch colonialism and the cultivation system (or cultuurstelsel) which was one of the most exploitative tools any colonial power has ever used, but their Calvinism cannot mitigate the guilt the Dutch still may feel in the Netherlands vis à vis the Indonesians. Because of this, there has been a tendency to gloss over the hardship endured during the Bersiap.

In fact, when I told two Dutch historians that I was writing about the abovementioned Gubeng Transport at the time of the revolution in Surabaya, they told me in hushed tones that I simply could not go there because it was considered controversial and “not done”. When, as a director of the Indo Project, I wondered out loud why there are Holocaust memorials all over Germany, but there is not a single statue or monument to commemorate the horror of the Japanese internment camps in the Dutch East Indies, Dutch historians ridiculed and lectured me.

So why are we seeing this? The root of the problem lies in the way the decolonization of the former Dutch East Indies was handled by the Dutch Government more than 75 years ago. It was a catastrophic failure with effects that continue to haunt not only the Dutch Government but the people who were affected. A public back and forth of finger pointing, such as this recent debacle involving the Rijksmuseum, does not resolve the injustices done in the past nor will the opinions of academics and public officials. Uncovering the truth about human rights violations that occurred during the period of decolonization INVOLVING BOTH parties is needed.

The Indo Project, as an international nonprofit organization is devoted to educating others on the history and culture of the former Dutch East Indies. Our main interest is in bringing resolution between those who fought for independence and those who suffered before, during, and after.

We feel that the Rijksmuseum brawl is a mere symptom of a festering colonial wound that won’t heal until we see some sort of truth and reconciliation commission that is not solely subsidized by the Dutch government, or led by an Indonesian task force, but by an independent and international body of researchers and organizations.

On a more modest scale, a Bersiap monument in The Hague or Amsterdam might be a start to tell the victims: We see you, we hear you and we will not forget you.

We are in this together. The Dutch and the Indonesians. Let’s stop waving flags, exchange barbed insults on social media and let’s come out of our silos and camps to join hands so that colonial exploitation and mutual genocides never happen again. Only then, we can move on in a postcolonial and more humane world.

Director Emeritus of The Indo Project

Read more about this subject and check these articles:

Revolusi Revisionism by the Rijksmuseum?