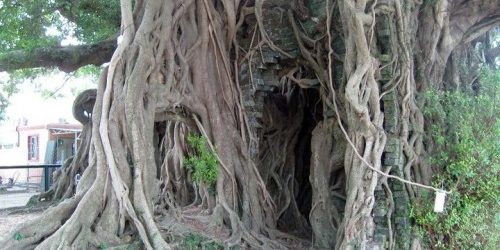 It was 1930, my mother, Godefreda Gertruda van Grafhorst was 6 years old and lived, at the time, in Surabaya, Dutch East Indies, known today as Indonesia. her mother’s maiden name was Godefreda Theodora,Jacoba Bokelman and her father was Johannes Cornelius van Grafhorst.  My mom was an only child but she had a dog, a Doberman Pincher that was constantly by her side while she ran through the neighborhoods and through the jungles.

She told me of a large Banyan tree. The trunk on one side was open from a lighting strike and the decay and was so large, several people could stand upright inside its opening. It was a tree considered sacred by many Indonesians and folks that followed Hinduism. Orangutans lived in this tree and women would often bring food in the evenings for they believed spirits lived in the tree as well and bringing plates of food would appease the spirits. But this tree was even more special because two large male and female pythons lived in the tree. The tree was located along a jungle path that all the children would walk past on their way to school. Everyone knew the tree was home to two pythons because they could always be seen intertwined with each other.  The kids would often peek up inside with both fear and amazement at the two large snakes. My mom was no exception, she was probably more curious than most kids. One day, however, everyone noticed that only one snake was left in the tree, and after two weeks that one was missing also.

A few weeks later my mom’s parents received an invitation to a dinner party given by a wealthy Dutch businessman. My grandfather, Johannes Cornelius van Grafhorst was also a businessman and the folks that were invited were asked to bring their wives and children as was custom at the time. At these gatherings, people had a very nice time. All the guests were amazed at the furnishings in the house and especially the 40 foot python skin hanging on the wall in the dining room.  When folks inquired how the businessman obtained it, he told of a story where he recently hired a hunter to kill one for him so he could display it on his wall. He said the python was so large it had to be dragged from the woods all the way to his house by four people.

During dinner, my mom and several little children were playing games under the massive wooden dinning room table that was 20 feet long and 6 feet wide and 3 inches thick, the legs were also massive and beautifully hand-carved. The table was covered with a long white tablecloth that almost reached the floor on all sides. As my mom was playing with her papa’s shoelaces under the table, she looked up and saw a very large python. It had wrapped itself around two of the legs of the table. My mom was not afraid but more mesmerized by the sight of this creature there just inches in front of her. My mom heard someone in the room scream and then felt her papa scoop her up and everyone quickly cleared the dining-room in a matter of seconds.

Apparently, the female python had followed its mate’s scent trail all the way from the jungle floor to the house, and knew her mate was on the wall. By wrapping herself around the legs of the table was as close as she could get to her mate.

The businessman quickly realized that his servants wanted nothing to do with getting rid of the snake so he again hired some people this time to take the skin off the wall and drag it outside into the backyard and back into the woods. The female snake soon followed and was not heard of again. No other python ever again nested in that Banyan tree.

When my mom told me this story. She often wondered why the python never tried to bite her. The servants in the household thought the same thing and were just as puzzled by this and looked at my mom a little differently since that ordeal. From that moment on when my mom and her dog would be seen running around. The locals would always invite them both for a little snack or fruit.