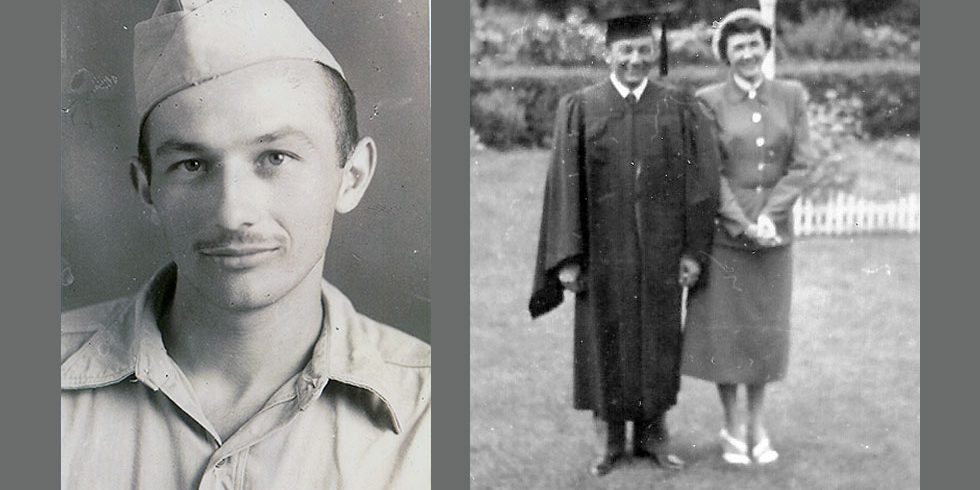 Mukden, Manchuria: Japanese Prisoner of War number 124 was interned in the infamous slave labor camp for a total of forty-four death defying months. This teen-aged, American U. S. Army, soldier’s name was Sigfreid “Siggy” Schreiner, a first generation Austrian-American who hailed from New Britain, Connecticut. He innocently left home imagining adventure at a rousing boy’s camp. Siggy was my hero, my ever-loving wonderful Dad. Every night of my post WWII growing up years we cleaned dishes side by side. He’d call out to me with a play-acting order accompanied by a fake bugle call: “Suzanne, report for kitchen detail.” Siggy did not approve of war but he sure loved military life. He enjoyed the early morning hours best, my sister and I did not. Dad solved that resistance by installing an electric buzzer in our bedroom. He would rise at five, make coffee, read three news papers, feed the dogs, repair something, shine his shoes, weed his garden, talk to his roses, shave, make lots of noise, and then cheerfully lean on that hateful buzzer until we had to get up. “Good morning girls, your breakfast is on the table. I’m off to work now.” Kisses and hugs and off he’d smilingly go into the big world.

At his wake many people came to say thanks to their friend Siggy, who had helped them so much. We had no idea who they were. Siggy had that charisma thing going on. One night while he washed and I dried, he revealed the specific stories from his daily survival in Japanese POW captivity that deeply scarred his soul. Often he’d stare out our kitchen window. I realized he’d gone back there for a time. The emotional words simply spilled out of him, as hot lava flows from the volcano. This writing does not have to repeat what you well know of the history. I’ve decided to tell you how Siggy blessedly came into our lives.

Modern Americans have absolutely no notion of how war turns most lives to dust. Not just soldier lives, civilian lives as well. After what we humans call peace returned, my mother found herself alone with two small children to raise. That August, mom rented a little cottage at the shore so we could all have a bit of a change of scene. At nine years old I, a self-supervising child, still enjoyed the early morning hours. I’d hit the beach for a swim. Actually, I did not know how to swim. I just loved the water and would paddle about. One morning, while paddling, I heard someone move towards me. It was a very handsome young man who smiled and introduced himself so politely. “HI, I’m Siggy, what’s your name? Suzanne, honey please turn and see how far from shore you are”. I was shocked. Siggy told me we were out 300 feet and my tube was useless. He pushed me in my tube and swam beside me until we arrived back at the shore. He invited me for a Coke at the Life Guard Shack. Siggy was the chief Life Guard for our beach. We enjoyed our Cokes and visited together.

I fell in love instantly. I cheerfully reported to the Life Guard Shack early every morning. I helped rake up seaweed, fetch stuff, and enjoyed my first boyfriend Siggy. He taught me to swim as well. I was welcomed as one of the “guys” enjoying games of cards, checkers, dice, and charades. I got rather good at dice. As part of Siggy’s self designed war rehabilitation, he trained as a gymnast. In time he had become Connecticut State Champion on both the un-even bars and the rings. He practiced every day on the beach using an apparatus he’d set up. Crowds gathered to watch him. His performances were flawless. Siggy was grace in motion and he had really big muscles. When his practice was done, he turned and cheerfully shouted “OK, let’s have a swim race.” We all loved to play with Siggy, he was so much fun.
I was so enthusiastic and smitten that I totally forgot to go home for lunch. On the third day my Mom came looking for me (it took her three days but that’s not today’s story). Mom was a knock-out, in the Rita Hayworth/ Liz Taylor sort-of-a-way. Now mom was not a flirt, she was actually very modest. But she just couldn’t help it—she had va-va-voom. Mom and Siggy instantly batted eyelashes at each other and soon enough I got a new Dad. Win-Win! For the remainder of our family life, he spoke of the war everyday. It was not with bitterness, just with sad regret. He had found out that humans could be awful.

Day-to-day, Siggy was a highly intelligent, problem preventing mellow fellow. The war, however, marked him deeply. The single civilian episode that demonstrated his soldier/POW experiences came at age 55—no longer a young man. Siggy and Lorraine went to Puerto Rico for a wedding anniversary treat. One evening they had a fancy dinner out and were walking the short steps back to the Caribe Hilton, when suddenly three men demanded Dad’s wallet and watch. Siggy was 5 feet 6 inches tall and slight in body; yet lean and strong. Mom reported: “OMG…Siggy just went Kamikaze on them, he screamed in Japanese, jumped up on two of the punks and quick as a flash grabbed them by the ears smashing their heads rendering them unconscious. He growled, hissed, showed his teeth like a wild animal without emotion. He efficiently dropped them to the ground grasped the third guy and simply broke his arm”. Mother’s screaming drew the police and the episode was over.

Clearly, the war was ever with him. Just what depth of inhumane horror did our American soldiers have to live through that could produce an instant lapse into a primitive episode of cave-man behavior? What war really is and what it does to soldiers is the tale to remember as we endure yet another war.

Photo #1 was taken in uniform (19 years old) @ Clarke Field just prior to Pearl. Photo #2 one is Siggy graduating from college standing with Mom (Lorraine) a proud day.