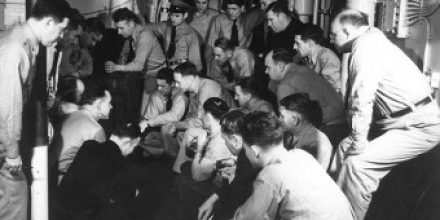 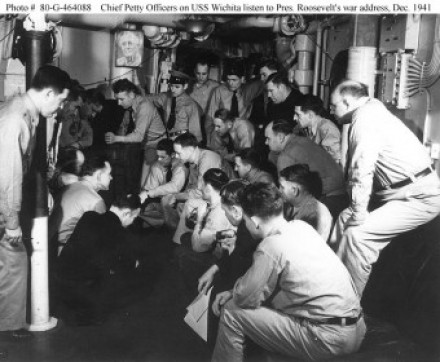 USS Wichita (CA-45)  Ship’s Chief Petty Officers listen to the radio broadcast of President Franklin D. Roosevelt’s address to the Congress requesting a declaration of War against the Axis powers, circa 8 December 1941.  Note phograph of President Roosevelt on the bulkhead.

The Good and the Bad

They’re in the same month.  You can’t talk about Christmas without remembering Pearl Harbor.   Hard to imagine what it was like to prepare for the holidays when your nation has been attacked.  Such it was for our parents, grandparents and greatgrandparents – only a couple generations ago.  Some of them are still with us to share their thoughts of that historical event.

On the day of the attack on Pearl Harbor I was in Soekaboemi (West Java) walking home from school. I was 10 years old at that time and heard the news from an older friend who had a radio at home. Our family  didn’t have a radio at that time and I shrugged my shoulders at the news as I didn’t know what it meant.  It was much later that I realized the seriousness of the attack. I was at school at that time in a dugout with the teacher and all other classmates when a Japanese plane hit the town. Three bombs fell close to the school, about 200 yards away and exploded with a devastating noise.  The target was a radio tower nearby but it missed the target.  Herman Leembruggen, USA

I was 2 years old.  I was on a sugar/tobacco “onderneming” close to Yogya.  P. Volkert, USA

I was 1 year and about 8 months old (born 24 April 1940 in Surabaya) and we were living in Malang – East Java.  For me Pearl Harbor means that finally the Americans were involved in WWII and because they declared war on Japan it meant that Japan would ultimately attack the Dutch East Indies. This would leave a lifelong scar on my family.  We were first interned into Camp Malang and after that into the horrible prison Banyu-Biru or Camp 10 !   Some of my indirect family members were killed by the Japs including a 24 year old cousin Kees van Benthem. Gerard Willem Charles Lemmens, UK

I was 1-1/2 years old living in Batavia.  I was probably sleeping. Edward E. E. Frietman, USA

I was in Surabaya.  I was 10 years old and in the fifth grade.  According to grandpa we will be at war pretty soon.  He was right.  March 1942 the Japanese planes attacked Surabaya.  They had to come from aircraft carriers because the Japanese was already in the Java sea on their way to Java.  About one month later we were occupied by the Japansese.   Frans Krajenbrink, USA

I was just 6 years old on Dec. 7, 1941 and living in Bandung with my parents and two younger sisters.  I have no memory of what I was doing at that time, probably just attending school.  Joyce (Hoeke) Kater, USA

I was 2 years old, living in Bandung with my parents and two older sisters. I do not know what I was doing that day or time.  Amani Fliers-Hoeke, USA

I was 14 years old and went to school in Malang. I remember that many people were worried about what could happen to us in the former Dutch East Indies. Others were telling that the Japanese could never win from America. I was intern at an RC boarding school so the nuns and we girls did a lot of praying. Yet it was still a happy time for we didn’t know what was coming later on.  Elizabeth van Kampen, The Netherlands

I was 2 years old.  We were living in Buitenzorg on Java.  I was sleeping as the time zone was different.  A.B.

We were crowded around our little Philco radio in an apartment in White Plains, New York, and I was about 7 years old.  All I understood was the consternation in my parents’ eyes.  And this was the first time I saw my parents cry.  That’s what sticks in my mind 70 years later. Anonymous

I was 1-1/2 years old living in Sukabumi, Indonesia.  I do not recall what I was doing at the time.  Pamela D. 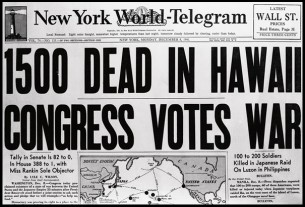