On the Move in Indonesia 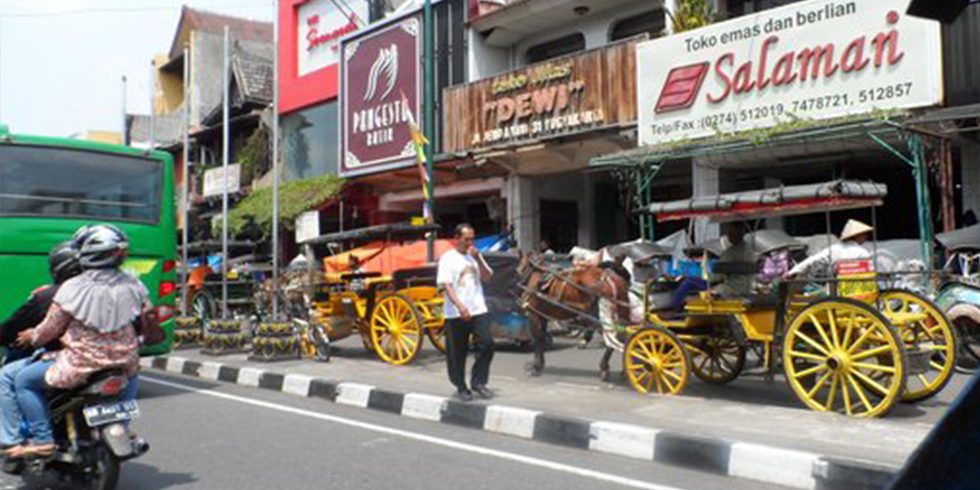 A dokar is the jiggling, horse-drawn cart found throughout Indonesia. The two-wheeled carts are usually brightly colored with decorative motifs and bells. The small horses or ponies often have long tassels attached to their bridles. A typical dokar has bench seating on either side, which can comfortably fit three or four persons. However, the drivers often try to pack in more than that—plus bags of rice! In Java you will also see the andong or delman, which is a larger horse-drawn wagon designed to carry six people.

Cycle rickshaws in Indonesia are called becaks. They became popular in Jakarta around 1936. Becak were considered an icon of the capital city of Jakarta, prior to its ban in the 1970’s. Citing concerns of public order, the city government forbade them on the city’s main streets. However, despite the attempts at eradication, many becak still operate near slums spread throughout the city. Attempts at reinforcing the ban resulted in large-scale seizures of this vehicle in the late 1990’s and early 2000’s.

The first motor vehicle in the Dutch East Indies appeared in 1893. The first person to produce motor vehicles in Indonesia was an Englishman called John C. Potter, who worked as an engineer in the first sugar factory Oemboel, located in Probolinggo, East Java. Potter ordered his motorcycle directly from the manufacturer, Hildebrand und Wolfmüller, in Munich, Germany. Potter was the only person who used a motor vehicle in Indonesia at the time.

The motorcycle arrived in Indonesia in 1893, one year before the first car (which belonged to Sunan Solo). This makes John C Potter as the first person in Indonesia to use a motor vehicle.
Another motorcycle, first seen in 1902, was used to pull carts. It was manufactured by the Minerva motorcycle company in Belgium.

Cars began appearing in Indonesia’s automotive industry in the 1920’s, when General Motors set up the Chevrolet assembly plant in Tanjoeng Priok. Until mid-1935 the middle class, or at least the lower ranks of the middle class, rarely owned a car. And if they did, the car would have had a 6 volt battery during those pre-war years (1930-1942). If the battery was running low, the engine had to be started with a crank handle. In order to save money, people would do maintenance and repairs themselves. An adjustable spanner and a couple of screwdrivers were generally sufficient to take care of minor maintenance and repairs. Cars still came with 6 volt batteries until long after World War II. People easily spent hours on the maintenance of their car—especially if the car got a lot of use. Every 1500 km, the engine oil needed changing, rotating parts needed greasing, and the spark plugs contact points had to be adjusted. In addition, the cooling water level needed to be checked regularly and the battery had to be topped up with distilled water when necessary.

Those who did own cars, were in fact drivers and mechanics at the same time. Particularly drivers/owners of a vans or trucks had their work cut out for them. From 1938 onward, when the number of cars had somewhat increased, some truly ‘technical miracles’ were performed. If need be, the engine was kept together and running with bits of wire. If the cylinder head was completely worn out, it wasn’t the end of the world: it meant a visit to a used car dump to get a suitable and fitting part. It didn’t really matter if the thread didn’t match, people would tap a new thread themselves if required. By using second hand parts of various makes, people generally managed to keep the engine going. Unlike in Europe, people didn’t need to worry about something called ‘labor costs’. On the corner of just about every street, businesses could be found where they would fix things in no time for next to nothing.

Pedicabs were found in Jakarta in the 1970’s. The name “pedicabs” is derived from the combination of the words “helicopter” and “tricycle” because its shape was similar to a helicopter and tricycle. Pedicabs were first launched in March of 1971. The main body of the helicak was a Lambretta scooter imported from Italy. This vehicle was first produced during the governorship of Ali Sadikin as a replacement for tricycles that were considered inhumane. With tricycles, the passenger sat in front while the driver sat behind. These vehicles were not safe for passengers, because if a collision occurred, the “penumpang” would be the first to feel the consequences.

Pedicabs didn’t last very long. While they slowly disappeared from the streets of the capital, it is rumored pedicabs can still be found in the Kemayoran area .

In the 1960’s and 1970’s the “oplet” became the most popular form of public transportation in Jakarta. Medium and large buses were rare. The route most traveled by oplets was from Jatinegara through Matraman Raya Jatinegara Station, Salemba Raya, Senen, and Pasar Baru. Other routes were also available in some areas, such as Kampung Melayu to Tanah Abang, City to Tanjung Priok, and Tanah Abang to Kebayoran Lama.

Oplet is public transportation with one door on the back. The door is the entrance and exit for passengers. At the front, there are also doors on the right and left. One passenger may sit beside the driver. Oplets generally accommodated about ten people. Interestingly enough, almost the entire body of the oplet was made of wood—even the window frames. The windows were not made of glass or plastic, but from wood and polythene that was not transparent. The petrol tank was on the inside, exactly between the legs of the passenger.

The OPLET originated from Morris sedans, a UK brand with modified tires. Austin cars were also used to manufacture oplets. As a result, the Betawi people generally prefer to call them “ostin” and not oplet. The Carrosserie factory, where oplets were modified, was located in Meester Camelis. The two parts of the oplet that were modified included the part where the driver is located, with a side door and passenger seat, and the rear passenger area. The flooring was made of wood and the roof was made of iron sheeting supported with a wooden frame. Windows were made of wood with plastic sheeting that could be raised or lowered.

If passengers wanted to hire the oplet, a contract system was used—meaning one person carrying goods could reserve the oplet. The oplet owner was required to give cigarette money to the terminal guards to ensure their routes were safe. The oplet operated in Jakarta from 1930. Originally, oplets operated only in areas of East Jakarta or Pasar Kramat Jati, Cijantung, Cibubur, Cilangkap and Cisalak since the 1950’s on an official licensed route. In 1979, the route permit was eliminated and its function was later replaced by the Mikrolet, Metromini, or Koperasi Wahana Kalpika (Cooperative Vehicle).