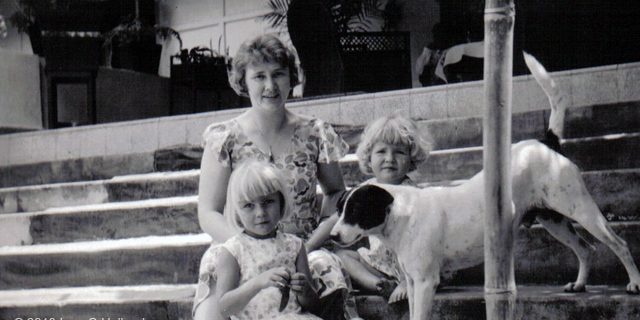 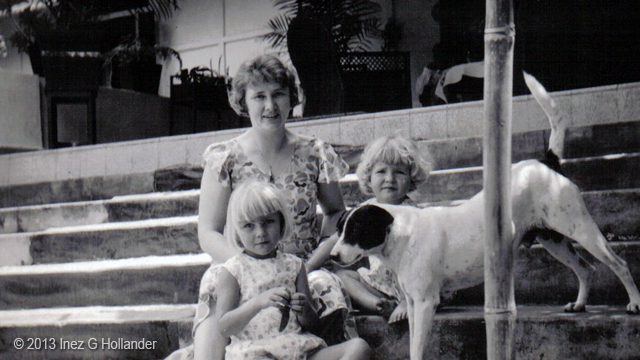 When Fré Francken and the other evacuees mounted the flatbed truck in the Gubeng neighborhood of Surabaya, she had only one thing on her mind; return to the Netherlands as fast as possible, away from years of starvation in the Japanese internment camps and sadly, away also from her dead husband, who, after months of torture and malnourishment by the Japanese, died of bloody diarrhea in a Bandung prison.

In a sense she was lucky. She had managed to keep her three children alive and healthy enough for early evacuation out of the camps. A moment of panic seized her when she and her two teenage daughters were separated and loaded onto different trucks, but Willy, her wise and mature eldest daughter, had reassured her that it was okay.

Soon after the six trucks of women and children started rolling down the streets, the revolution in Surabaya broke out and thousands of Indonesians took to the streets to reclaim what was theirs to begin with. The trucks were ambushed and, after four hours of relentless shooting at the trucks, which filled the gutters with blood and pieces of flesh, Indonesians stormed the trucks, peeling off survivors and finishing the job with machetes, knives and bamboo spears.

Fré remembers running from truck to truck in the pitch-black darkness, hearing the howling of victims and revolutionaries combined, but eventually unable to find her two daughters. At the opening salvos of the snipers on the surrounding houses, she did hear a piercing cry from Willy, “Mommy, mommy, I am hit,” but could not find either of her daughters and ended up in the nearby kampung, dazed and in shock. Someone brought her her youngest daughter, Joke. Holding Joke’s dying body in her lap like a baby, Fré stared at the many holes in her 12-year-old daughter’s body while cradling the girl and kissing her bloody face. For the last time, the daughter opened her eyes in an attempt to console her mother, “Mommy,” she said, “It doesn’t matter; I am already dead.” Fré never saw Willy again and even though she got confirmation in 1946 that Willy had died too on that hellish night of October 26th, 1945, for years she had nightmares of Willy wandering from kampung to kampung in search of her mother and siblings.

For more than sixty years, this story was hidden away in my family, never talked about, never revisited. When I tried to recreate the narrative of my great-aunt Fré and what had happened to her husband and two daughters, I realized that the silence surrounding this topic was not at all unique to my family and not unique to the colonial and post-colonial discourse of the Netherlands. Accounts of the Gubeng Transport, one of the three major bloodbaths during the revolution, were few and far between in the Dutch history books and when I told a Dutch historian that I was working on this for my book Silenced Voices (Ohio University Press, 2008), the historian told me in very clear terms that I could not publish this story for “political and diplomatic reasons”. In 2005, the 60th anniversary of the Japanese surrender, I offered a condensed version of the story to one of Holland’s national newspapers, NRC Handelsblad. The editors liked the piece and edited it for publication. One week prior to publication, the piece was pulled and no reason was given. “Too risky,” said one of my Dutch friends. Joke and Willy Francken had been brutally murdered, their murderers had never been caught, and sixty years later, it still wasn’t ready for prime-time in the Netherlands.

But there is also this side to the story:  More than three generations of my family enriched themselves on sugar, coffee and rubber, harvested in Java. They used the cheap labor of the Javanese and took more wealth out of the country than they brought back in. The Dutch conquered Indonesia and stayed there for more than three centuries: their rule was exploitative, cruel and at times very bloody. Jan Pieterszoon Coen, the founding father of Batavia, committed genocide when he founded the capital on the burned and looted land of the original settlement of Jakarta. The Aceh War (1873-1914) was one of the bloodiest conflicts in our shared colonial history and the cultuurstelsel, or cultivation system, was probably one of the worst exploitative colonial get-rich quick-schemes in the world. My family did not engage in the cultivation system, but they were complicit in the colonial money making schemes and profited from land that was not theirs. So…let it be heard that:

I apologize to the Indonesians and the Indonesian government for all the wealth my family extracted from the land. If the money were still in my family, I would gladly give it back. Especially if it could bring back Willy and Joke.

I apologize to the Indonesians and the Indonesian government for using and abusing the Javanese people to fill Dutch national coffers. The Dutch railway system was built on the profits that came out of the back-breaking labor of the Javanese. I apologize for that too, even though I have ridden many of those trains without ever thinking why some of the older stations like Haarlem and Amsterdam looked so beautiful.

I apologize for all forms of genocide, murder, violence, use and abuse of the Indonesian people committed under the Dutch flag.

Last week, the American historian and expert on the Indonesian Revolution, William Frederick, was sending some shock waves through the Dutch media, reinforcing the idea that victims of the Revolution and the Bersiap, i.e. the period of violence against the Dutch, Indos but also the Chinese, took on much larger proportions than we have surmised thus far and has been under-documented in the national historical discourse. Emphasizing that victims and relatives of the victims do not seek reparations but want a mere place in history, he has been rebuffed by the Dutch government which claims not wanting to go there because of diplomatic relations with Indonesia.

This is a slap in the face, for it means Willy and Joke Francken never existed and their pain and suffering (and they were killed because they were the colonizers and carried Dutch passports) is not acknowledged by the Dutch government for whom, you might say, they laid down their lives. On Facebook this turned into shouting matches. Someone did away with Willy and Joke citing that was the kind of “collateral damage” that “happened” in wars. I am not prepared to call Willy and Joke collateral damage, just as I would find it very insulting if someone were writing off the many Indonesian casualties under colonial rule as the “collateral damage” of colonialism. Murder is murder no matter who the victim or killer is and for a full documentary and historical record, we need to record all the murders and injustices from both sides. The Indonesian Revolution and the Bersiap were extremist and extremely bloody, so much so, that witnesses have compared it to the French Revolution. Sukarno never sanctioned the violence but he did not try very hard to stop it either, for it was a tool that helped promote the agenda of the independence.

I seek no reparations. I do not even seek an apology. All I am seeking is an acknowledgment of both the Dutch and Indonesian government that on the day of the revolution, which the Indonesians call a “Day of Heroes”, many innocent women and children (Dutch, Europeans, Indos, Chinese) were slaughtered and hacked to pieces. It goes without saying that the Dutch government needs to come clean and apologize to the Indonesians about all the colonial atrocities that have been committed since the seventeenth century. They owe it to a generation of young people like Willy and Joke who were wiped off the map due to colonial vengeance and hatred that had been brewing in a cursed cauldron for more than three centuries.

Last year, one of the descendants of Willy and Joke, a niece to be more exact, traveled for the first time to Java and the former family plantation. Wandering the grounds, there was, for the first time, she told me, a sense of real anger over the aunties who once were but never lived to exist for her either.

It’s been my mission to tell Joke and Willy’s story until the day I die, because, apparently, no one else will do it for them.

Inez Hollander, Ph.D., is a Dutch Studies professor at UC Berkeley. To put the Bersiap in a more sophisticated historical context, she is trying, with the help of the Indo Project, to kickstart an annual lecture, followed by a Round Table discussion of scholars around the world who can weigh on what happened during the Bersiap and decolonization which, in effect, triggered a massive Indo migration and diaspora. Questions of identity and belonging of the Indo population, and in particular the Indo population that, after (failed) repatriation, migrated to the shores of the US and Australia, are rooted in the events of the Bersiap and decolonization, and it is important that scholars without political agendas keep addressing and investigating these events and after-effects to make sure the historical record is preserved for the future, and possibly, a touchstone for both the Dutch and Indonesian governments to rid their closets of its colonial skeletons. We want to host the first lecture in Northern or Southern California in the spring of 2014. Interested in making this happen or donating? Contact or donate to TIP. We want to hear from you, and cannot do it without you!