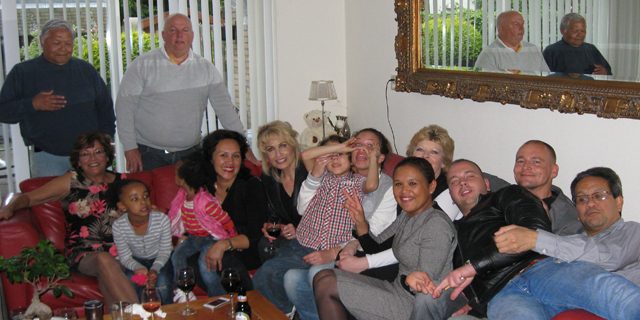 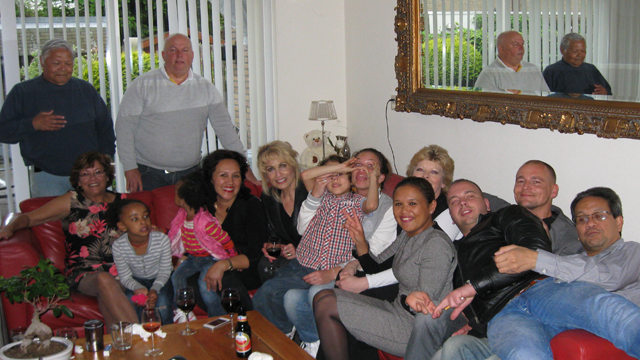 A recent article in “De Java Post” about Oom Bert Simon, started me thinking.  Oom Bert was one of eight children; I don’t remember if he was the 3rd or 4th child.  He was very popular with the Indo/Indonesian community in Holland, as he was Station Manger for Garuda Indonesian Airways.  He was also my late ex-husband’s uncle and his witness (or Best Man) at our wedding.

To say that the Simon family was a large one, is an understatement.  My father-in-law, Joseph (Jos), Oom Bert’s older brother, married Lily Tielman, the oldest of 6 children.  Together they had 6 children, of which Frank (my ex) was the oldest.  Birthdays and wedding anniversaries were ALWAYS celebrated in true Indo fashion, with a lot of food.

During the time I was married, I lived in the Netherlands, having returned there in 1971 to work for KLM.  Many of you may remember how small the houses were over there.  In any case, for birthdays and anniversaries at least 40 people would gather and all rooms would be occupied, especially if the weather was not nice, which was the case more often than not.  If it was my turn to host a birthday or anniversary party, I’d be in the kitchen for days, preparing all kinds of Indo food.  It’s a good thing I like to cook!  Even though we crammed so many people into our homes, we always had a good time.  We were, and still are, a loud bunch, with lots of joking and laughter.  Oom Bert’s presence always meant good stories, many of them hilarious, which prompted more laughter and noise.

Many years have gone by since those days.  My in-laws have passed on as well as my ex and some of his siblings.  Of the 8 Simon siblings only 4 remain.  Yet, to this day, when the Simon family gathers, there are still 40+ people in attendance.  Our children have grown up, have gotten married and have children.  My sister-in-law is a great-grandmother at the ripe old age of 64!