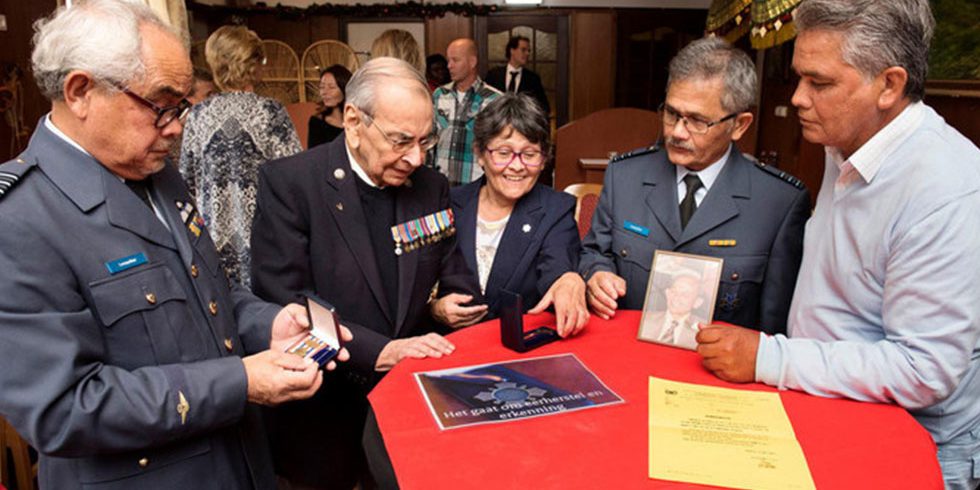 KNIL sergeant 1st rank Arno Lesquillier, from the village Maarssen, was awarded the Mobilization-War Cross and the Medal for War and Peace yesterday (KNIL stands for the former Dutch Indo Army).

This was awarded posthumously, because Lesquillier died on March 1, 1979. He died from complications of the atom bomb that hit Nagasaki on August 6th, 1945.

It is Wednesday: 16.00 hours. The ceremony is located in a small room on the top floor of the Jakarta, a famous Indo Restaurant, at the Lucasbolwerk in Utrecht. Dressed for the occasion in his old uniform Rob Lesquillier, a retired captain of the Dutch Royal Air Force, calls the company to please sit.

Rob is the eldest son of Arno Lesquillier. He holds an introductory chat; his voice trembled. He announces lieutenant colonel Brijl Jacques, who has made it his life’s work since his retirement to apply posthumously for army medals for deceased KNIL soldiers—such as the Mobilization-War Cross. He has attended hundreds of meetings and it still affects him tremendously.

It was Rob’s sister Peggy, a lawyer in Utrecht, who set the ball rolling for her deceased father. Recognition for what he had to endure was the motive: “I saw an article about the good work of Jacques Brijl. I wrote him a letter. And now here we are.”

Arno Lesquillier was only a young soldier when he was captured by the Japanese to be a POW. He was initially taken to Singapore and then was moved to Nagasaki in Japan. There, he was less than 2 kilometers away from the atomic bomb. His body was badly burned by the explosion and he lost most of his sight. After the war ended, he needed a year to recover. Despite the bad news from the doctors, that he would probably not grow old because of severe radiation, he participated in two police actions in the Dutch East Indies before being repatriated to the Netherlands.

“We arrived in Westerbork, the former Jewish concentration camp” says his son Rick with some cynicism. “My mother got back a traumatized man. Very introverted. He never said anything about the past. Actually, I was raised by my mother.”

Rick is pleased with the recognition, but feels it is very late. Even if his father had been awarded twenty years ago, it would have still been too late: better late than never.

Jacques Brijl is happy that he helped offspring, like the children of Arno, be proud of their father. He looks happy as the children admire the two awards that read: “Honor them who need to be honored”.

“And tomorrow I will receive another request, and the day after, and the day after. Fortunately, I am not alone and there are more bodies resurrected who are also committed to rehabilitation of the many fallen soldiers”.

Peggy: “This is a nice ending. The awards are also for her mother, who died only two years ago. She had seen a young, handsome soldier go off in captivity. She got back an old, broken man. She had waited so faithfully, turning down many marriage proposals, until he returned, after many of these years.” 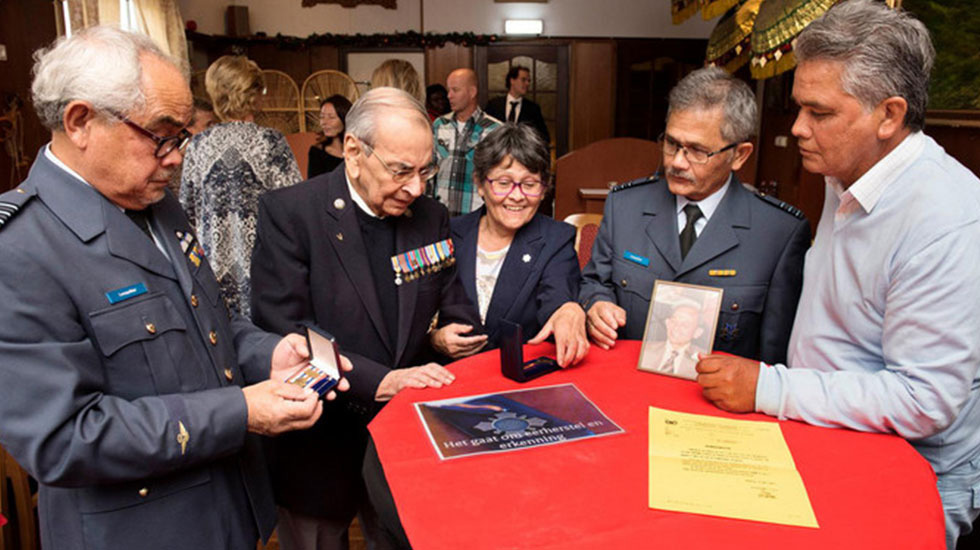