On August 3rd, 2014, a Herdenking Ceremony will be held in the Bay Area at Oakmont Memorial Park in Lafayette, California. At the ceremony, we honor the sacrifices made by civilians and the military during the Japanese occupation in the Dutch East Indies and elsewhere under the Japanese rule.

In the Netherlands Armed Forces the equivalent would be ‘Vaandelwacht’ or ‘Vaandelgroep’. The purpose of the Color Guard at the ceremony is to represent:

At this particular ceremony, the purpose is also to honor the sacrifices that has been made by the Armed Forces as a result of the Japanese expansion in the pacific theatre. Therefore, the Color Guard will attend in military uniforms to support the ceremony.

The Armed Forces of The Netherlands have issued various protocols regarding military attendance. At the Oakmont Memorial Park ceremony, the Color Guard will be instructed in order to comply with these protocols.

The uniforms of the Color Guard can represent various branches and regiments from the Netherlands Armed Forces. The two regiments represented by Color Guard at the 2014 ceremony were carefully selected. Both regiments were the first to be sent to the Dutch East Indies in order to take over control from the Japanese soldiers. 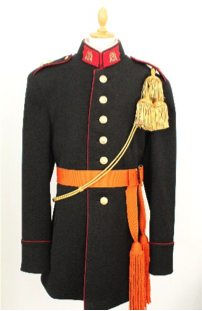 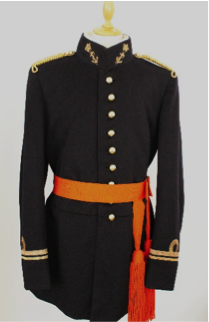 Image 1, left:  A ceremonial ‘Stoottroepen’ tunic with an officer’s cord and bouillon fringes marking the rank of 1st lieutenant. Image 2, right:  A Royal Netherlands Marines Corps officer’s uniform. Embroidered branch distinctive on the collar and gold colored shoulder knots. Both tunics have the orange sash on the waist, meaning loyalty to the Royal family, a tradition that has been in the army for a very long time. Note that the commanding officer of Rembrandts painting of The Night watch also wears an orange sash. Both tunics are present at the Color Guard.

The regiments represented at the ceremony are: 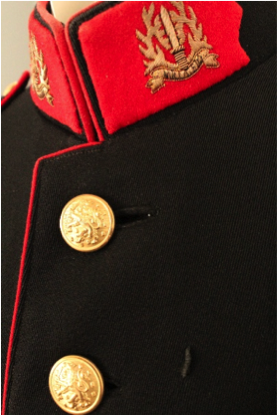 Image 3: Embroidered regimental markings on the collar and The Netherlands Armed Forces distinctive on the buttons. The red accents on the tunic are referring to infantry.

At the upcoming ceremony, the Color Guard will attend in a ceremonial tunic. Last year, the Color Guard appeared in service dress so this year will be different. The ceremonial tunics are original Netherlands Army fatigues decorated with distinctive markings from the branches and regiments mentioned above. Ceremonial tunics are used at the Kings/Queens court and at ceremonial occasions. Their appearance is elegant, solemn and impressive. The Netherlands Army tunics have a stand collar (tenue- / djas toetoep). They are tailor-made out of fine quality fabrics and are finely decorated with embroidered unit markings, gold colored gallons, shoulder knots, officer’s cords with bouillon fringes (a Netherlands fourragere), red colored trouser stripes, etc. all according to the rich Netherlands Armed Forces traditions.

About the author: Jesse Eijsbroek will be providing the Herdenking 15 Augustus 1945 Bay Area organization advice and support on Netherlands Armed Forces affairs. Both of his grandfathers were assigned to KNIL infantry X ‘Gadjah Merah’ after years of forced labor at one of the Kanchanaburi railway camps as KNIL POW’s. In this army family tradition, Jesse had a 13-year army career at a Special Operations Parachute/Air Assault army unit with multiple foreign expeditions including Coalition Forces operations in Iraq. For the Herdenking 15 Augustus 1945, Jesse will use his army experience and expertise of Military protocols in order to honor our past with dignity.