Learning about heritage through food 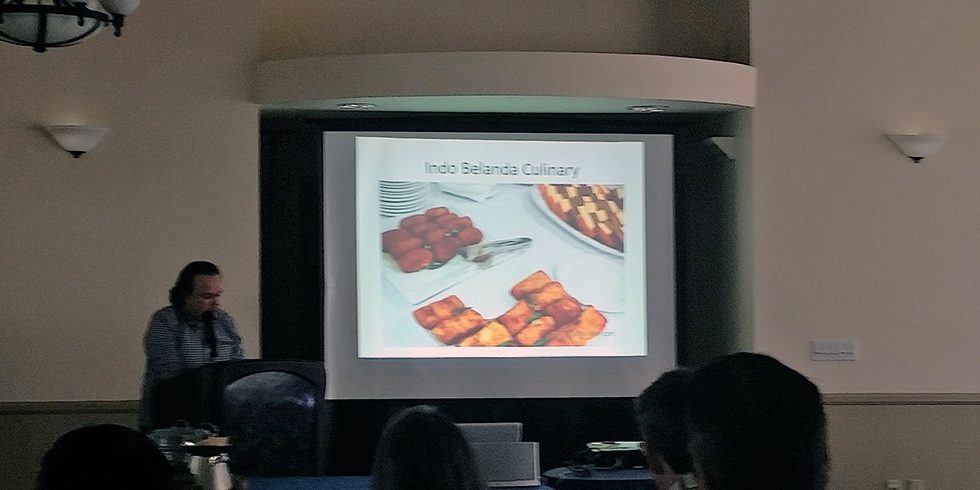 More than 2,000 people came together to celebrate their heritage at the 27th Holland Festival, held at Gemmrig Park, in Long Beach. For many of the attendees (around 70% with roots in the former Dutch East Indies), it is a yearly reunion with family and friends where they enjoy typical foods from Holland and Indonesia. This year there was a significant increase of younger attendees. The TIP booth drew a nice crowd—it presented a variety of activities and held a fundraising raffle with interesting prizes.

The following day The Indo Project organized the 3rd annual lecture, renamed TipTalks, held at the Skylinks Golf Club in Long Beach. This year it was held on Memorial Day; the presenters were Jeff Keasberry and Jamie Stern.

“It is vital to understand where the traditions you identify with come from. They link us to others and help us tell the Indo Dutch story in a more full and rich way.”

Part of TIP’s mission is to educate about the past and help preserve culture for the future. As 1st and 2nd generation Indos slowly disappear, their knowledge is also lost. We have found that younger generations are showing more interest in their heritage, getting more in touch with the Indo within, and raising more questions regarding customs etc. I believe that “it is vital to understand where the traditions you identify with come from. They link us to others and help us tell the Indo Dutch story in a more full and rich way.” Therefore this year’s theme was: ‘Learning About Heritage Through Food’—the social unifier. Unlike what some people were assuming about this subject, it was not about exchanging recipes or demonstrating cooking techniques, rather this day was about explaining Indo history and traditions since the 17th century and the emergence of a hybrid culture and fusion cuisine in South East Asia. I used the journey of tracing my family history and ancestral roots through food to add to the program. The Dutch Indies people were instrumental in creating new food traditions in South East Asia and in migratory countries like the Netherlands and USA. Cultural heritage is in the food we eat, the clothes we wear, the religions we follow, the skills we learn. Sometimes we can touch and see what makes up a culture; other times it is intangible. Cultural heritage provides an automatic sense of unity and belonging within a group and allows us to better understand previous generations and the history of where we come from.

“Indos residing in the Netherlands are two times more likely to eat Indonesian and Indo Dutch Fusion Foods compared to the Indos in USA.”

Trying to preserve Indo culture in USA is difficult. Jamie Stern’s findings from her Worldwide Indo Challenge research showed that “Indos residing in the Netherlands are two times more likely to eat Indonesian and Indo-Dutch Fusion Foods compared to the Indos in USA”. She also showed that there are more Indos per square mile, which simplifies cultural maintenance. As opposed to the USA, where scattered geography makes it more difficult to retain that distinct cultural identity.’

In addition to diaspora, many Indos don’t speak or understand Dutch, which is also part of Indo-Dutch culture. Most publications on the subject of history and culture are available in Dutch. During my presentation I explained that eating Indo-Dutch food triggers memories. It is a way to bring comfort and get in touch with your past. A good meal recalls a dinner table full of friends and family members long gone. Jamie explained the science of smell and how it triggers memories. She also presented the healing properties of prominent spices in Indo-Dutch cooking.

I concluded that the way to preserve Indo-Dutch culture in the USA is to create more awareness about our food, not only by making it more accessible and cooking it more often, but also by telling the stories behind each dish. It is time that Indo-Dutch cuisine receives the accolades it so richly deserves. The cooking style is a reflection of the Indo-Dutch diaspora — a unique blend merging the best of both worlds. In the Netherlands the ‘Indische Rijsttafel’ has been officially added to the list of National Inventory Intangible Cultural Heritage in January 2016. If you are interested in your family’s heritage, food is one of the best places to start, it is often the last tangible trace of cultural traditions to go!

Talking about food for more than two hours left the audience craving food. The Indo gathering was not complete without enjoying good conversation and even better oriental finger foods.

©JeffKeasberry for The Indo Project