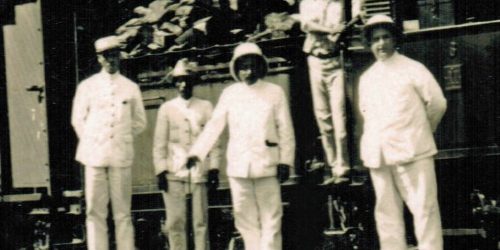 (My grandpa is the smallest guy and it seems he is pointing at something with his right hand.)

When my mom was a little girl in the early 1900’s she lived in Palembang on the island of  Sumatra.  This island was still quite wild compared to Java.

The house they lived in was built on stilts along the Musi River which was so wide that you could not see the other side and during the wet monsoon season the river flowed over.  There were also alligators in this river and one of  their dogs was attacked by one and had his leg bitten off.  To get to school, Mom and her two brothers went by motor boat across this river.

Her father (my grandpa), Gerard de Bruin, worked for the railroad company.  I believe it was the Deli Railway of Netherlands East Indies and he was in charge of installing the railroad tracks through the jungle after it was cleared.  In those days there were “suntil” tigers in Sumatra. One day mom told us that grandpa (opa) came home with two tiger cubs.  Apparently, the mother tiger was scared off by the noise the railroad workers made with the equipment they were using.  Later that night their pet dogs were barking and grandpa (opa) knew right away that the mama tiger was looking for her cubs.  He went outside with the cubs and heard the mamma tiger let out a soft groan to let her cubs know where she was.   Grandpa (opa) put the cubs down and they started running towards their mamma.

Editor’s Note:  Frans is busy writing his biography and this is an excerpt from his manuscript which he has graciously offered to share with us.  This photograph is over 100 years old and Frans still has the original.