John Von Bargen: “One who is proud to show… what an Indo can do!” 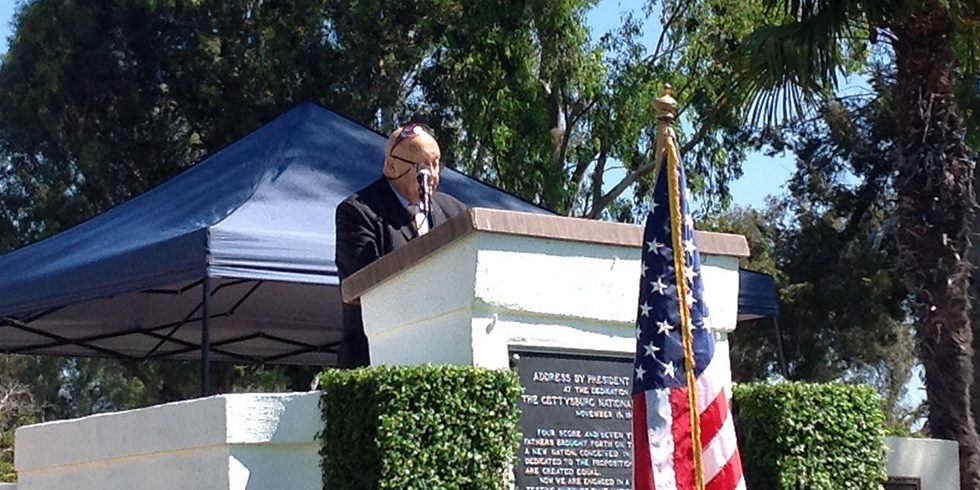 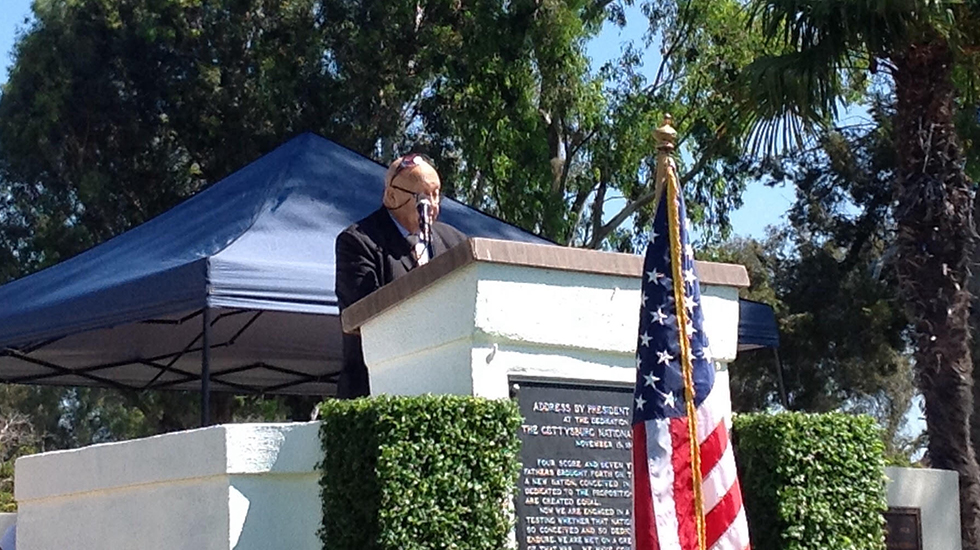 John, speaking at the 2016 Herdenking Ceremony

During the August 2016 Herdenking Ceremony held at the Los Angeles National Cemetery, longtime Southern California Indo John von Bargen was asked to give the Invocation, as well as give some words of remembrance. He spoke eloquently of how forgiveness can become the best means to honor the memory of those we lost in WWII, the concentration camps, and the Bersiap period afterwards.

John also detailed the historical context of that time, referring to the wealth of information gathered via Internet searches that better illuminates the roles Dutch and U.S government policies played in setting the stage for the Japanese aggression in Southeast Asia.  John impressed upon me the imperative that the Indo Community continue in the quest to ‘leave no stone unturned’ in accurately recounting our history.

With that mindset, I met with John who shared his story—looking back on the peaks and valleys in his life. With well-earned satisfaction, he recognized overcoming seemingly insurmountable circumstances, to achieve success in America.   John’s story shows that TIP can be a platform for highlighting positive contributions members of the Indo Community have made, or as John would probably say, to “….show what an Indo can do!”

John’s early years: John was born in Palembang, on the island of Sumatra and was 4 years old when Japan started to invade South East Asia and the Dutch East Indies. His father was employed by NKPM, a Dutch oil company (which was later bought by Standard Oil Company). John and his mother fled Sumatra to Java when the Japanese invaded Indonesia, while his father stayed behind, under orders to destroy the oil refinery, so that the Japanese invaders could not immediately use it for their forces.

After destroying the refinery, John’s father aimed to reunite the family on Java.

Unfortunately, John’s father was captured and imprisoned in a Japanese concentration camp. His mother’s sisters’ husbands were also imprisoned (two ultimately lost their lives during their imprisonment). John and his mother remained outside the prison camp but still endured the horrors of war, suffering from the lack of family support, food, medical care, clothing, and maybe worst of all, the continual threat of violence.

However, there was a specific incident during the final hours of the Japanese occupation that John recalls, when his Oma showed kindness to a Japanese officer who was running from the advancing British-Australian allied forces. The officer went into the family living room and asked for a glass of water. John’s Oma gave the Japanese soldier the water he asked for. When confronted by the family afterwards, they asked what possessed her to give water to the enemy. Oma replied “Ach, hij is toch ook een mens met een familie”, which means “after all he, is also a human being with a family”.

After the war, Standard Oil Company (Stanvac) recalled all their former employees to rebuild and start-up the refinery again. John, his father, and his mother returned to a Sumatra to live in Sungai Gerong, where his younger brother was born. This small village was built around the refinery for housing of the Stanvac employees and their families. This little village housed Americans, Hollanders (Dutch men), and Indos. So many Indos, including John, had American neighbors that played with the Dutch and American children. As a result, John began speaking English around the age of 9 years old. The Sungai Gerong village had a Dutch school and an American school. After a certain grade, it was typical for the students to return to Europe or America to continue their education.

In the mid 1950’s John was sent to Holland to continue his education. His parents remained in Indonesia until his father’s contract with Stanvac expired. John lived in a boarding house (Don Bosco) in Rijswijk with many Indos and other kids from the Dutch West Indies (Surinam, Curacao, Aruba, etc.), who were also away from their parents.

John finished his education and graduated from the Scheeps Werktuigkundige school (Merchant Marine Academy) in Rotterdam, Holland. John was then employed as an engineer by Esso Tankvaart Maatschappij (Esso Tankers), in Rotterdam, Holland. In the meantime, John’s parents and little brother (born after the war) came to Holland where John’s father was employed by Aramco (Arabian American Oil Company). One day a former American neighbor from Indonesia visited John’s parents, while they were in Holland. John’s dad was not happy in Holland and this neighbor said to John’s family: “This is no life for you. Come to California. I will sponsor you.” During that time, the Pastore-Walter Act was in effect, so John’s parents and John gladly accepted the offer. First, John had to finish his contract with Esso. He followed his parents to America a year later, after he was married to Thelma Varkevisser.

John’s first job in California was as a pump service man. He assembled, installed, and serviced industrial pumps used by petrochemical, chemical, and other large industrial facilities. In the meantime, John continued to look for other employment. He received an offer from Loyola University to become their youngest maintenance superintendent, after being selected from 76 other applicants. He was 23 at that time. Two years later, John was promoted to “Director of Buildings and Grounds” for their physical plant. He managed a group of 80 employees during his time at Loyola University, which in 1973 became known as Loyola Marymount University. John won the distinction of being proclaimed “Administrator of the year” by the student body of the university.

During his last 3 years at the university, John became friends with one of Loyola Marymount’s donors and regents. In 1971, this gentleman started a company in the air pollution abatement industry and asked John to join him as the company Engineering Manager. John accepted. Three years later the company was sold to Northrup. John remained for a few months and decided to venture out on his own.

John started his own company, with three other partners, that dealt with the budding industry centered on air pollution abatement/industrial water purification. He managed to obtain two patents during this time. However, the technology was too new to be accepted by the industrial community, thus, the company failed. However, a report written by the Jet Proposal Laboratory for NASA claimed John’s technology to be useful as a means to treat/purify water, as well as its conservation. In the early 1990s, and presently, this technology is widely used for treatment of industrial water. The failure of the company, though tough at the time, was to be a blessing to John. He became saved and a born-again Christian, for which he credits as what helped see him through that tribulation.

In 1980, after his business failure, he started working as a project engineer at Hirt Combustion Engineers. After a couple of years at Hirt, he became its Engineering Manager. Hirt Combustion was one of the first companies in the 1950’s to design and build air pollution abatement equipment in the Los Angeles basin. John left Hirt Combustion Engineers to help a German instrument company start their American division. After leaving the instrument company, he joined an entrepreneur to design and fabricate thermal oxidizers for air pollution abatement of emissions from manufacturing facilities throughout North America. John obtained two more patents during this time.

In 1995, John left this company with another co-worker and joined a metal fabrication business known as Ship and Shore Sheet Metal.  This company was in the process of expanding their industrial product line, which included air pollution abatement equipment. His experience, and that of his co-worker (Anoosheh Oskouian), was just what was needed. In the year 2000, John and Anoosheh purchased the company, renaming it Ship & Shore Environmental. Anoosheh was named as President and John was named as Vice President. John was to oversee engineering and manufacturing and Anoosheh was to oversee sales and finance. This venture became a success, growing alongside with the heightened awareness for the need of industrial businesses to operate in a more environmentally responsible manner.

John is now in the homestretch of his enviable career. He is not ready to retire due to the fact that he still enjoys working with technology, customers, and co-workers. He has also developed relationships over the years with air pollution control agencies in Southern California, Texas, EPA, etc. Although at the age of 78, he is feeling the effects of his age and the steady dose of 12-14 hour days. He will “take the foot off the throttle,” in the hopes of an eventual, clean hand-off to a successor.

He and his wife, Thelma, are the proud parents of seven children (one recently passed away), 17 grandchildren, and 8 great-grandchildren. They also count Anoosheh’s son as their 18th honorary grandchild. John also is very involved in the ministry and has officiated for many weddings, memorials, and funerals for his fellow Indo’s, friends and family. It brings him joy to know that many of his fellow Indos who arrived in America over the years have made a success of their new homeland, persons such as Frank Van Don, Ben Apon, Fred Labaar, Lodi De Ridder, to name a few.

John is proud to be an Indo-American! 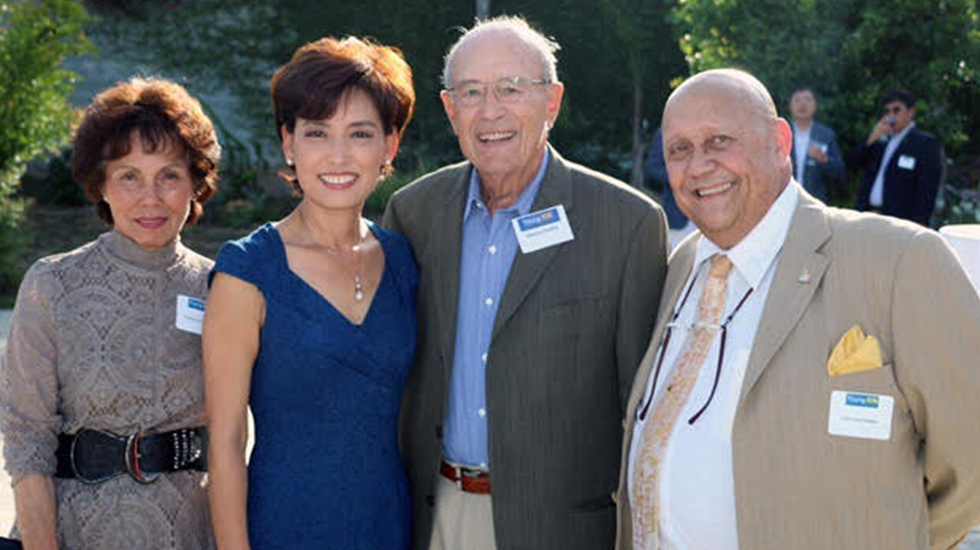