Jennifer Ripassa brings people together with her street art 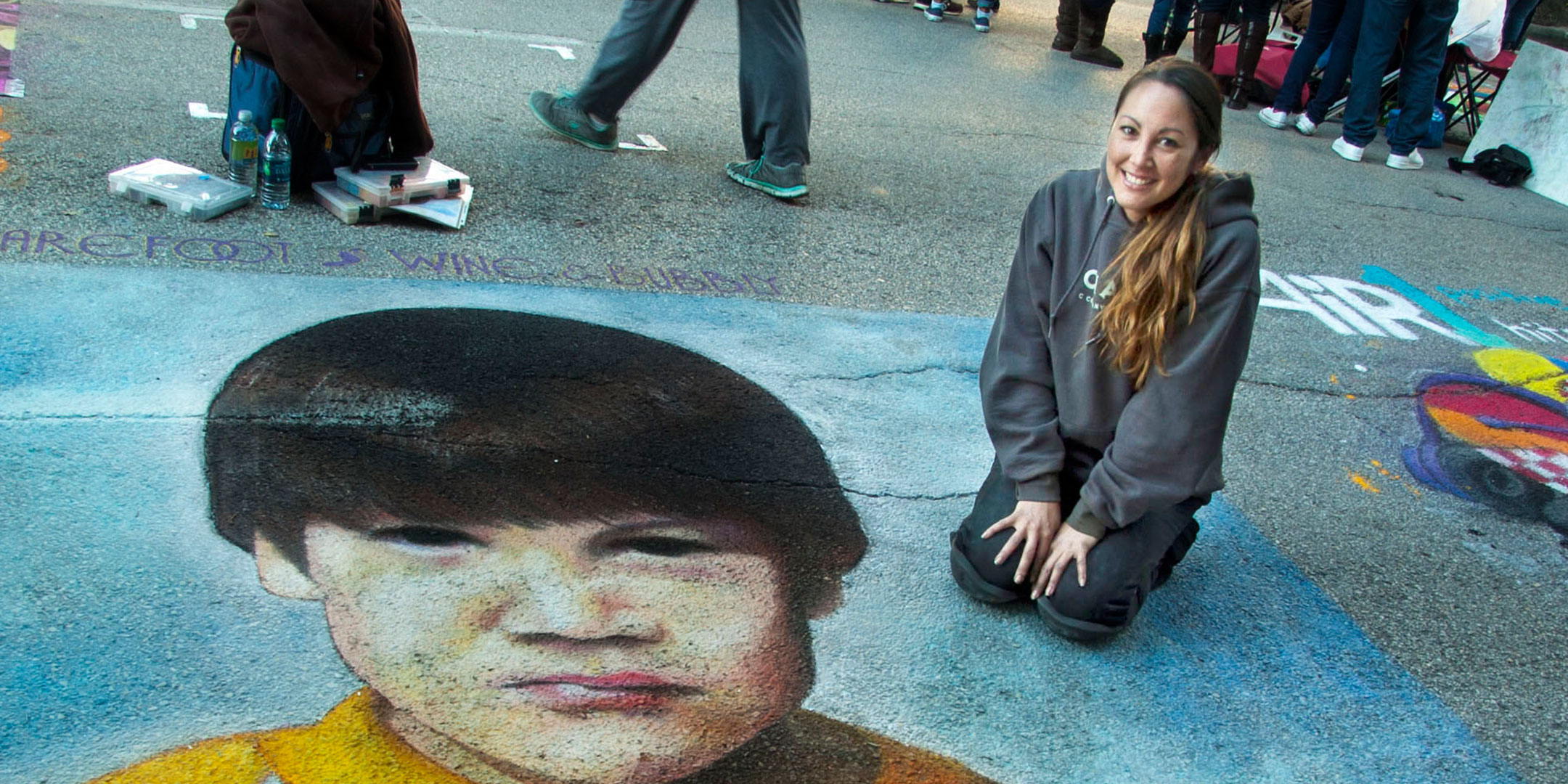 My name is Jennifer Ripassa.  Born in Southern California, I’m true SoCal Indo. My parents are Dutch-Indonesian; both born in Surabaya, Indonesia, and came to this country with their parents, looking for a brighter future. I remember Oma Monod, born in Amsterdam, telling me about a letter she received from President John F. Kennedy giving her, Opa and their 7 children, permission to immigrate to the United States from the Netherlands. That was in 1962.

My Opa Monod, born on the island of Sumatra, had a father who was Assistant Resident of Jambi. His mother was Javanese. He lived with his mom in the kampung until age 5. He was then sent to the Netherlands for school and came back to Indonesia as a Dutch Marine fighting for continued colonial rule/against nationalism. He became a national hero in Indonesia.

My Opa Ripassa was also born on the island of Sumatra, from parents of mixed backgrounds… Ambonese, Javanese, Dutch. Oma was born of Dutch parents and later, after having 7 children, migrated to the United States as a single mother. Unfortunately, Opa passed away before my dad turned 2.

My parents met here in the United States through the Indo club called De Soos. I feel so blessed to have been able to watch them sing and dance in De Soos shows growing up. So creative my parents were in the making of the props and the costumes and all the art of the stage. That creativity doesn’t fall far from the tree!

I am an artist. I always have been. I get that mostly from my father, also a great artist. I am the type of person who will get squirmy sitting at a desk answering phones. I like to doodle, build models of all kinds and just be creative in whatever way I can—no matter how dirty I get. As far as my artistic career goes, it began at a very young age.

Flipping through old paperwork, I stumbled across “Mr. Potato Head”, a drawing I did at age two.  At five years old, I had decided I wanted to be an Artist when I grew up. All throughout school I was known as “The Artist”.  My art teacher took me under his wing. Yes, he made fun of my Hagelslag sandwiches I’d have for lunch while I learned how to oil paint. Chocolate sprinkles were my absolute favorite! Mom definitely made sure I didn’t paint on an empty stomach!  Before I turned 17, I became a versatile photo-realistic artist in pencil, charcoal, acrylic, pastels, pyrography and I even airbrushed my first portrait!  La Mirada High School was just the beginning.  I was showing my work in galleries and winning all of the art contests; one in particular was for the Dorothy Chandler Pavilion in Downtown LA where they printed 100 posters of my work and displayed it all over the city!  That was my first very proud moment. It was then that I began to really get noticed. Those contest winnings in addition to art scholarships, paid my way through college. I studied Fine Art and Graphic Design at California State University, Fullerton. Sometime after college I realized I didn’t want to be stuck in front of a computer my whole life. I wanted to get my hands dirty. Manicures? They wouldn’t last a day.

I have had a passion for art since I could grasp a crayon. And here I am today, regularly commissioned to create logos, murals in homes and businesses, portraits, paintings of many subjects and even tattoos. Some are now included in private collections as far as Europe and Indonesia. In 2007, things changed for me. I was invited to my first street painting festival. I discovered the thrill and challenge of creating on the pavement, before a live audience. Street Painting had become my new love. I now travel across the country (hopefully around the world soon) sharing this new love. Street painting is my freedom to create whatever I want. It’s an adventure; an impermanent form of art where a battle against the elements, heat, cold, wind and rain, is never-ending.

Street painters need a live audience. We are performers where the pavement is our canvas and the chalk is a temporary medium that can transform a blank piece of concrete into something elaborate and full of color. That’s part of the fun. Creating a grand piece of art in days where your fingers get burnt by the hot pavement or bloody from the rough surface, only for it to be swept away by harsh winds, rain, or even traffic. It has gained worldwide popularity in the last few decades and I am so proud to be a part of it. I love street painting because I can become fully immersed in the process, sometimes even forgetting where I am or that I need to eat. It is therapeutic and tranquil, and I love how it brings people of all cultures together.

My greatest inspiration is my brother, Max—once a great artist. Although no longer physically with us, I don’t go to one street painting festival without knowing he’s there with me and I’m constantly wanting to make him proud. He was my subject in a chalk festival in Houston once. Couldn’t hold back the tears when I chalked his eyes and saw him looking back at me. Such a proud moment.

How about a few fun things I’ve done with my art?  In 2014, I did a live art “performance” at the Dutch King’s Day Festival.  My chalk piece was raffled off at the Holland Festival where the proceeds were donated to the Dutch School of SoCal.  That was fun!  I’ve also done several live art performances. In 2015, I was nominated for the RAW: VISUAL ARTIST OF THE YEAR award and I was a featured artist at RAW: Hollywood: an eclectic Indie arts show featuring live musical performances, performing arts, runway fashion shows, visual art gallery and live art (that’s me, Jennifer Ripassa!).  I’ve even painted for Johnny Rockets in Washington DC and instead of paint, I used ketchup!  My work has been featured in Los Angeles galleries, on an independent film, and even on the billboards at big bus stops!

Have you seen anamorphic street paintings? The ones that look 3D? Yes, I do those too. I’ve done big 3D pieces for conventions such as Vidcon, I’ve painted 3D infectious diseases through a magnifying glass, and painted giant 3D wasps and bees, to name a few. And who should be so lucky as to have their husband assist them with their work? Street painting can get lonely at times, so it’s nice to have company. My art usually includes eyes, and I often find myself lost in them, losing track of time in the process. Hubby is good at helping me finish. Together we’ve won several street painting competitions.

In celebration of the Indonesian side of my family heritage, I featured my beautiful mother in traditional Balinese dress, in a chalk street painting in Houston in a few years back.  It was definitely awesome to share a little about Indos to so many people who knew very little to nothing about us. I am still learning about us!

My name is Jennifer Ripassa, I am a proud Indo artist who paints to make people smile and if I could paint a smile on everyone’s face, I would.

If you want to see more of my art, just type my name into Google. I am everywhere.