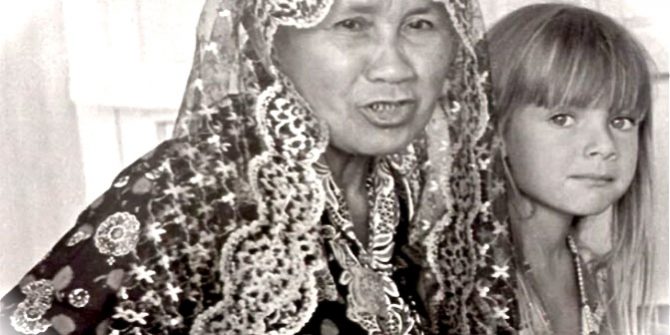 It was with great pleasure to interview Jeannette Lambert from Montreal, Quebec, Canada.  Our Skype connection but for one tiny glitch went smoothly and we had a nice chat about our mutual heritage.

Jeannette is a jazz singer, artist, mother, wife from Canada who was born in Leiden, NL.  Her father, Walter Schwager, is an Indo of German descent born in Cimahi in 1940 and raised in Bandung.  Her late mother Agatha Schwager was Dutch with an Indo soul. By the time she was 3 years old, Jeannette had already traveled to three different continents.   The family moved from Holland to New Zealand by boat and to their final destination, Canada by plane. 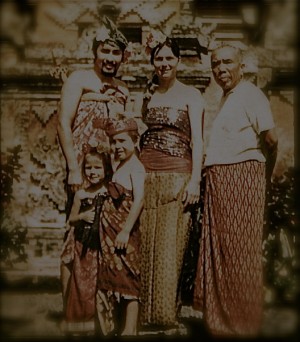 The photo on the right depicts the family en route to Canada from New Zealand as they made a stop in Bali.  In 1969, there were no hotels in Ubud and the only available accommodation was the palace.  In the picture with them is the palace prince Cokorde Agung.

Married to Canadian Michel Lambert, Jeannette has dual citizenship between Canada and The Netherlands.  They have two sons, Théo age 7 and Jérôme age10.

When asked how her Indo/ethnic background has influenced her life decisions she said it has “colored all of it”.  She has managed to intertwine life and art and has lived life as an artist having performed professionally since age 12.  There is a family bond to music reciting stories of her oma singing Javanese folk songs on her way to the market.  Also, her husband Michel Lambert (drummer/composer) and her brother Reg Schwager (guitarist) are in her band.  The house was always open to people with plentiful food involved.  Jazz musicians with their long hair and beards and tye-dye clothes would come in waves to hang out and her grandmother made a comment one time how nice it was of them to “feed the poor”.  We shared a good chuckle at that one.

Her Dutch mother embraced the Indo culture and taught Indonesian cooking classes during their stay in New Zealand.  She was pleasantly surprised when a picture showed up on a web site called Artwork Life featuring her mother teaching this cooking class.  It is an article in the Woman’s Weekly 1968 New Zealand paper The Way to a Kiwi’s Heart.  The purpose of the cooking class was to counteract racism and promote understanding.

She knew her Javanese oma (grandmother) who was quite a role model for her having been an astute businesswoman in her own right.  Because Jeannette was not taught the Dutch language, she has a fragmented grasp of its understanding and has found that she could communicate better with this Javanese Oma, as they both spoke a hybrid of sorts of the Dutch language.  Kind of a lingua franca.  She said the loss of the Dutch language had seemed to create a sort of detachment from her heritage, particularly when visiting relatives in Holland.

Her poem “Jalan Jalan” is featured in this video with gamelan type music and haunting images of family home movies. Her oma is the lady in the white headress. It’s a simple composition of the new juxtaposed with the old artistically portrayed.

When asked how she maintains connection to her Indo heritage the first thing she said was going on hikes with her cousin Marianne Van Toor in California.  Coming from cold Canada and being in the warm California sun and hiking amidst palm trees and climbing back down to drink and eat chips puts all the elements together for her in a reminiscent way.  Through her singing career she has also had the opportunity to perform in Jakarta several times so her connection is ongoing.  She also has friends in Montreal who are Indonesians and they get together because of the food and their mutual children, creating a sort of expat family.  In 2011, she is taking her children, husband and her father to Indonesia on a family trip so they can experience it all together.

Her favorite Indo food is everything.  It was hard for her pinpoint exactly.  She was making Soto Ayam for her kids’ lunch that day, one their favorites.  Basically, anything salty and deep fried.  Now, that’s my kind of gal.

The three most important things in her life is family, creativity and joy. 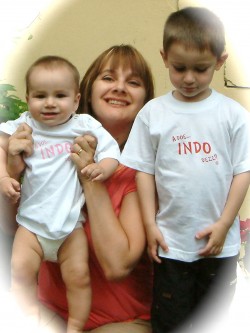 Jeannette and sons Jerome and Theo

You can find Jeannette anywhere in the world performing and creating and she’ll be the first to tell you that she has a real travel streak in her soul.  We decided it must be from our maritime sea voyager Dutch ancestry….