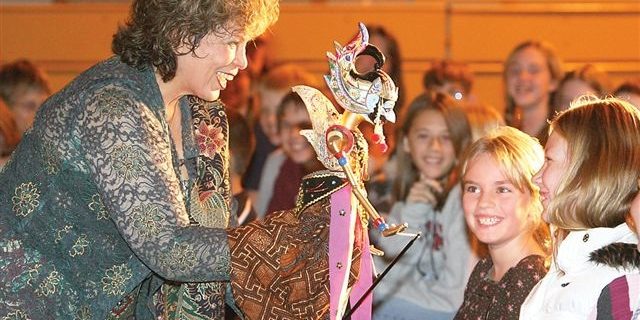 I had the good fortune of interviewing Tamara Fielding as our first Indo Profile of the month.  On the east coast, she has carved out a life path by integrating her love for  drama and her Indo heritage.

Born in a military town Chimahi, West Java, she spent her childhood in Bandung.  When the war broke out she was in the 1st grade.   By the end of the war four years later she was illiterate so she had a lot of catching up to do with her schooling.  This complicated the fact that she had to also assimilate in a new society in The Netherlands after repatriation.   In 1946 she was sent to Switzerland because it was believed she had TB.  She was fortunate to have her family accompany her there.  After returning to The Netherlands the following year, she moved to Curacao which was a pleasant time.  She reunited with her biological father in 1949 in The Netherlands when he returned from duty during the “Politionele Actie”  in Indonesia.  She then moved to France to study drama.

In March of 1956 aboard the ss Maasdam with her older sister she emigrated to the USA.  It was unusual for two young single women to emigrate, but they were fortunate to find a sponsor who helped them get settled in their new country.     Feeling cut off from her Indo network, she started a social group called The Indo Waringin Club which existed  from 1956-1960 and brought together the few Indo families that lived nearby.  She is now an American citizen.

After years of attempts at playing theatre on Broadway and taking acting lessons, she realized she had to do something else.  At one point, a casting director told her to lose her accent because it sounded “too German”.  So she took voice lessons and coaching which got rid of the “German” accent.

Still not able to break out into acting, she reverted to an art form she loved since a child on a plantation in Indonesia.  Her father was a rubber plantation owner and all the field workers were natives from the local village.  He hired a shadow master to perform and entertain the workers.  This early exposure to shadow puppets influenced her decision later in life.  She learned the skill and techniques by studying this art form in Indonesia. She became a Dalang (shadow master).  The Wayang culture was reserved for males so this was extremely unusual.

Her performance shows have taken her to various diplomatic circles such as the Indonesian Consulate, festivals, schools, museums and cruise lines such as the Royal Caribbean and Holland-America lines around the world.  She always makes it a point in her 10-minute introduction to explain her Indo heritage and background, the meaning of the Wayang and concludes the performance in an hour.   She has become known for her talent and was invited to an International Wayang Festival in Indonesia in 1999.  There was only one other woman Dalang.  She was asked to perform and she also met Indonesia’s President Habibie.

When asked how her Indo heritage has influenced her life decisions, Tamara stated that the prejudices experienced earlier in life made her persevere more and also include the art form which she learned in Indonesia.  Her role as a Dalang has opened doors and provides the vehicle to introducing her background.

The pride in her heritage is instilled in her children and grandchildren.  Married to a Jewish man, their son’s Bar Mitzvah party was celebrated at home in their backyard.  They served Indonesian food with satay with peanut sauce and all the intricate dishes prepared by Indo friends.  Her Jewish friends thought it was the most delightful and different Bar Mitzvah party.  Celebrating both of her son’s cultures on that significant day was important and her son remembers it fondly.

Conversation between Indos is not complete without discussing food.  Upon asking her favorite dish, Tamara said “babbie kecap”. Even her grandson made it for school on International Day.

Her influence extends to her grandchildren, in particular her 12-year-old granddaughter who is starting to learn how to use the shadow puppets.

The three most important things in her life are: Her family, her career and the desire to always learn and grow in the arts. 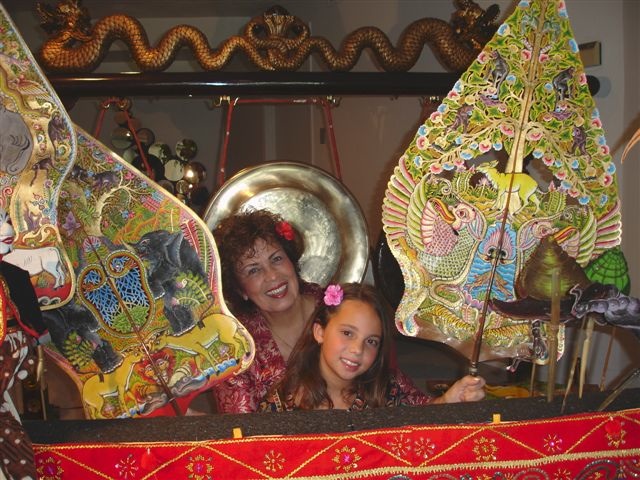 Tamara and her granddaughter Elizabeth

TAMARA AND THE SHADOW THEATRE OF JAVA