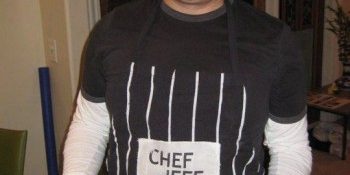 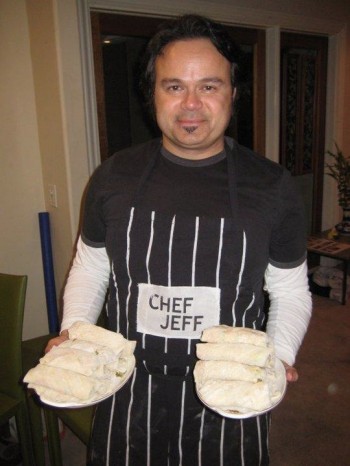 Jeff with freshly made loempia

How can you not love food if you were born above a restaurant ?   So it was for Jeff Keasberry.

His oma’s restaurant in Amsterdam, which opened in 1954, was called “Djokja” after the name of the town she was from in the former Dutch East Indies.  Jeff said that the restaurant was an extension of their living room and kitchen.  Typically after coming home from school he would snack on a kroepoek (shrimp chips) or whatever was available.  His oma owned the building and extended family members lived on different floors so Jeff was never alone, having people and food together all the time.  He said it was like a constant kumpulan (party).

Jeff’s immigration story has a slight twist. In the mid 1960’s his parents moved to the USA.  In the 1980’s his parents went back to the Netherlands to help out his oma with the restaurant which they eventually took over.   In the meantime, his growing up years involved frequent travel between the Netherlands and USA as his extended family lived on both continents. By the time he made the decision to live in the USA permanently, he was familiar and comfortable with the American lifestyle.

When asked how his Indo background has influenced his life decisions, Jeff states that he strives to maintain equilibrium between his Dutch-Indonesian culture and heritage against those of his adoptive country, the USA.  He says that having been born and raised in multicultural Amsterdam with Indo influences it has helped him to be open towards other cultures, have more tolerance and he has developed a broad perspective on spirituality.  He also said it got him to further explore his identity having reached a solid sense of place and purpose.  He shifts easily between a Dutchman to an Indo to fully embracing American culture.  Home is where his heart is and he creates his own “gezelligheid” (sense of warm friendly comfort). 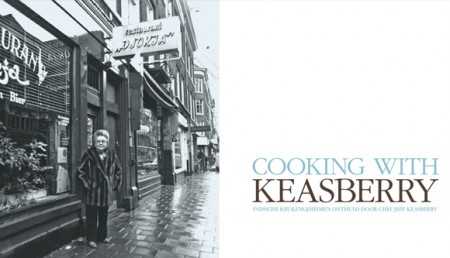 Oma Keasberry in front of restaurant in Amsterdam

Editor’s Note:  Jeff is on the board of The Indo Project who brings great passion and pride in his Indo heritage.  Learn more about Chef Jeff.