Indo ProfileStoriesWitness to the War 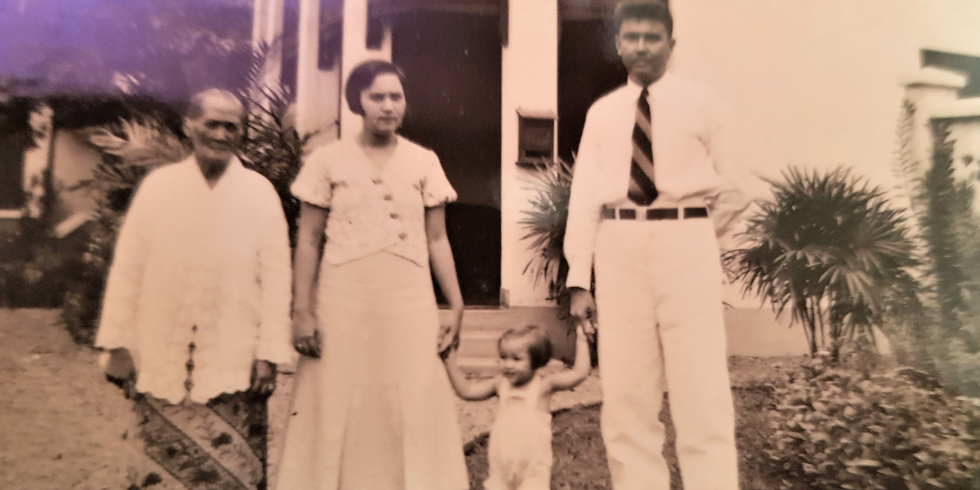 The Bombing of Pontianak

When I was 8 ½ years old, I lived in Pontianak, the capital of Borneo, Indonesia. On the morning of December 19, 1941, I visited a friend who lived opposite the military barracks. We sat in the lounge facing their barracks. We heard planes, which was a rare event, so we looked up and we saw the very first bomb on the East Indies falling on a military officer.

From thereon, my life changed drastically. The bombing lasted for hours. The reason no alarm had been sounded was because the planes had flown above the clouds. When the bombing was over and we were united at home again, we were so emotional. All the four members of my family could have been killed. The whole city seemed to be in flames. Even in the harbor, there were three military ships in flames. The houses had no water or sewerage. Each house backed onto a river over which the bathrooms were built. When my mother walked to the bathroom she saw people hurrying with suitcases on the other side of the river.  They told her that they were on their way to the harbour where a ship was departing soon. She ran inside, grabbed a suitcase, and in a panic filled it with anything she could lay her hands on.

The ship did not leave until it was completely full. There were women and children everywhere. It was a terrible journey. While it lasted only two days, it seemed endless. Everybody, including the crew, was in shock. The captain became dangerously mad and was locked up in his cabin.

Escape to the Mountains

Our ship was the last to leave Pontianak. Friends of my mother had the opportunity to catch a Chinese slow boat (I presume that is a sailboat). All the other women who stayed behind were killed, mainly in the concentration camps. In Batavia (now Jakarta), we stayed with my grandparents until a telegram from my father came, telling us to flee to the mountains. He thought that that would be safer than Batavia or any big city.

We left for Semarang (located in the middle of Java), where my mother’s family lived. Her brother had a holiday house in Nablak, the highest point in the mountains of Java. My mother was quite stressed and depressed by that time and my brother and I had a hard time coping with it.  Apart from that, we had a peaceful time and even made some new friends. Peace did not last long.  Over the radio we heard that the Japanese were coming up the mountain, ransacking and murdering everyone on their way. My mother prepared herself to be murdered.  One or two days later, late at night, the Wedana (head of the village) came and told my mother that he had to go down to Magelang and offered to let her come along.

Before we left we said farewell to our new friends, knowing what was going to happen to them and we would never see each other again. In Magelang, we stayed with friends until we could travel on to Jogjakarta on our way to Batavia. In Jogja we also stayed with friends, where our journey was delayed because all the railway bridges were destroyed. The stay was quite pleasant apart from the nearby military garrison.

I had my ninth birthday there, so that was six months after we fled from Pontianak.  Finally we could continue our journey, via Bandung, to Batavia. On the train we had a very unpleasant incident.  We were the only whites. An Indonesian man commanded my mother to give her seat to him. Luckily there was a gentleman, who looked Indonesian, but was Dutch Indonesian like us. He stood up to him and told him to leave my mother alone. The rest of the journey he stayed with us. And even in Bandung he brought us to our friends. What a God send!

Eventually we were back with my grandparents. Opposite them was a small empty house where we lived.  I had my 10th birthday there. I still have a keepsake from that birthday: a Chinese ginger pot, which was filled with sweets. I now use it as a sugar pot.

One day the Djongos (butler), the only Japanese man living on the street, came to my mother with a message from his boss. He wanted to meet my mother.  My mother was so furious and sent a message back, which was not very flattering. The next day everybody on our side of the street had to leave their houses before noon, leaving everything behind except their clothes. We happened to live behind enormous bougainvillea bushes, and they missed our house.

My mother quickly prepared to be removed. Nobody was able to drive a car anymore, because the petrol was only for the Japanese. My cousin and his friends had made a flat cart with wheels, which they had to push and pull. The little belongings, which were given to her, were quickly put on the cart and off we went to the other part of town where my grandparents had an empty house for us. This was in 1943 and we stayed there until the end of the war. We did not go into a concentration camp thanks to a German grandfather on my mother’s side and thanks to the Japanese person who dealt with my mother’s case.

Several times she was called to have her “blood” checked. Her father was Dutch, so had 50% “bad blood”. Her mother was half Indonesian (25% “good blood”). Her grandfather was German, but long dead. The question was: what had he been, a civilian or soldier.  My mother did not know. They wrote down “soldier”, which meant that she could stay outside the camp. This procedure took place every time my mother was called for a “check up”. My mother’s sister did go into a concentration camp.

Most men were imprisoned and their families had no income. My mother got a bit of money from a tenant.  We had chickens and ducks for the eggs and sometimes she killed one for dinner. We had a veggie garden. Mom kept us busy with all sorts of things. My brother and I secretly had lessons, because there were no Dutch schools and lessons were prohibited. One day we saw somewhere on our front patio Japanese characters. Our tenant, Diederik, translated it and it said: “Here the children have lessons.” That was the end of our lessons.

In the afternoon of December 28, 1945, we heard an enormous bang that sounded like a bomb. Everybody was wondering whether the end of the war was in sight. Diederik was in the hospital, and I was going to bring him some food that afternoon. The hospital was full of crying and wounded people. When I left, I saw two trucks full of pieces of bodies. It was clear to me that it had been a bomb. I was confronted with the very first signs of the war and the end of the war. After that, it did not take long for the Japanese to leave. But the worst was still to come: the Indonesian rebels began to ransack and murder. Our street was sometimes blocked and nobody could enter or leave.

Occasionally you heard the reason afterwards, but most of the time nobody knew what was going on. My mother moved to a house in a less dangerous area just in time, because war was declared on the Dutch. Indonesians were not allowed to sell us anything, including food. It was dangerous to get out in the streets. Our tenant Diederik could not go to work on his bike and was picked up by car. He was still at the radio, which was again controlled by the Dutch.  Luckily we got food from the Allied Powers via Diederik. The concentration camps were closed again and heavily guarded to protect the people.

The Red Cross sent us a message that my father was still alive and that we could join him in Pontianak.  We went there by sea-plane. My father had spent the wartime working in a concentration camp in Kutjing in North Borneo. He got cancer a few years later and passed away at the age of forty-eight. Papers were found about the death marches which had taken place. My father missed one by five days. A father of a friend of mine literally dropped dead during one of those marches.

It was a happy reunion which did not last long.  My parents both went through such a traumatic time. Soon we returned to Batavia where my parents divorced. In 1946, we were “transported” to Holland. It was a terrible journey! It was like cattle transportation. It was very humiliating, even the food was dog food. On a Dutch ship? In Holland we were not particularly welcomed, but that is another story.

Are you an Indo who would like to share your story with The Indo Project? We welcome you to describe your journey. Submit your story!