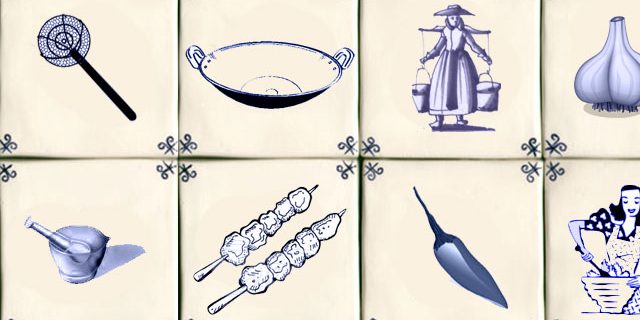 As of this month we are adding a new category to our TIP site: Food.  Eating and cooking are at the core of our culture and talking about it equally so. The objective is not to create another recipe box per se, as there are plenty of those sites already, but more to share memories, traditions and customs about our Indo Dutch Food Culture.

If you are wondering what Indo Dutch Food is, you are not alone. Internationally, little is known about this exotic cuisine. Many people still refer to it as Indonesian food. Not entirely wrong when you consider it originated in the same geographical area known as Indonesia. But in my opinion it’s a bit oversimplified. There are actually differences between Indonesian and Indo Dutch cuisine, even though they are intertwined on many levels. As some would say about this relationship, “It’s complicated!”

In the Dutch language, different terms are used to refer to the same cuisine, or one term is used for both cuisines. In my opinion, this stems from a lack of historical awareness, which also leads to confusion and lengthy debates. How did this cuisine evolve? Can we talk about the subject of colonialism without raising too many eyebrows? I think we can when we put the emphasis on food.

I also post stories and recipes on my website (keasberry.com) which is about the Indo Dutch Food culture. It’s one of the initiatives to support my mission, which is to get the Indo Dutch Cuisine the accolades it so richly deserves. In order for it to be recognized and acknowledged, the terms used, should be understood universally. ‘What’s in a name?’ does actually matter!

Here are the most important terms I prefer to use in the English language:

This is the tagline of my website, which is dedicated to the shared culinary heritage of both countries; the Netherlands and Indonesia. This includes; Indo Dutch food and other traditional foods from Indonesia and the Netherlands. The food I was raised on.

For example: “second-generation  Indo Dutch people” (can also be applied to first, third and fourth etc.)

Other terms used are ‘Indo European(s)’* or Indo(s)’**. People of mixed ancestry, with roots in the former Dutch East Indies and Europe. The Indo Dutch people (most with Dutch citizenship) who were born in the former Dutch East Indies, lived there, associated themselves with, and experienced the colonial culture of the former Dutch East Indies, a Dutch colony in Southeast Asia before Indonesian independence after Word War II. It also includes the descendants of these people, the Indo Dutch diaspora (who live outside of Indonesia), often raised with the cultural traditions belonging to this community. In the Dutch language the words ‘Indische Nederlander(s)’ is used. In the Indonesian language ‘Indo Belanda’. Another term in Indonesian language used is ‘Peranakan Indonesia Belanda’ (descendant of Indonesia Netherlands). Other people from Europe, like full blooded (unmixed ancestry) Dutch people who were born and raised in the former Dutch colony and associated themselves with this subculture, often refer to themselves also as Indo Dutch. The Dutch word generally used is ‘Indisch’. In Indonesian language they are called ‘totok’ (Indonesian word to describe ‘new’ settlers of ‘pure blood’) or ‘belanda’ (Dutch). Actually, I would introduce and prefer to use the name ‘Indies’ like the Dutch word ‘Indisch’, or ‘Indischman’ which refers to someone coming from the Dutch Indies, regardless of bloodline, being mixed or full blooded.

* an older name for Indo people, mixed race people of Indonesian and European descent. **nowadays the term Indo is also used to refer to Indonesian.

(The most common term used in English is ‘Dutch Indonesian.’ I would rather not use that because the assumption is often made that the community we refer to are Indonesians. Just like for example Italian-American or Irish American. The first part denotes ethnicity and the second part citizenship. Therefore Indo Dutch: Indo-European ethnicity and Dutch citizenship, which was the case in the period of the Dutch East Indies and later the Netherlands, where most of the community migrated.)

The word ‘cuisine’ describes a characteristic style of cooking practices and traditions, often associated with a specific culture. Indo-

Considered one of the oldest fusion cuisines ‘avant la lettre.’ Indigenous and Dutch ingredients and cooking techniques blended together, influencing each other which resulted in new dishes and food traditions. It developed over a period of more than 350 years, in the Dutch-held colonies, the area known as the Dutch East Indies before Indonesian independence after World War II. The Indo Dutch Cuisine is the distinct cuisine of the Indo Dutch community. It’s also referred to as Indo-European (‘Indische’ in Dutch) cuisine. This characteristic style of cooking practice embraces the best ingredients and cooking techniques of both worlds and is used by Indos in Indonesia and in diaspora, cooked in the countries where most of the Dutch Indo people migrated to, like the Netherlands, USA, Canada, and Australia. A smaller number stayed behind in Indonesia. Many of these dishes and food customs can be found in both countries Indonesia and the Netherlands, mostly within family circles, traditional recipes passed down for generations.  The Indo Dutch cuisine further evolved in the respective countries, with local ingredients and cooking styles, while staying true to authentic tastes. For example: ‘rijsttafel’ (‘rice table’; a Dutch invention, an elaborate meal of Indonesian and Indo Dutch dishes with rice, developed during the Dutch colonial era), Indische macaroni schotel (baked mac ‘n cheese Indo style), Indische huzarensalade (Russian salad with an Indo twist), spekkoek (spice layer cake), klappertaart (coconut tart), ajam smoor (braised chicken with spices), Indische pastei tutup (shepherds pie), ajam kodok (stuffed chicken), split pea soup with rice, perkedel (meat balls or meatloaf Indo style), just to name a few. Samples of similar fusion cuisines that originated in South Asia are: Peranakan or Nyonya, Cristang and Eurasian in Malaysia and Singapore and the Anglo-Indian cuisine in the UK and India.

A diverse cuisine, because Indonesia is composed of approximately 6000 populated islands of the total 18,000 in the world’s largest archipelago, with more than 300 ethnic groups calling Indonesia their home. Many regional cuisines exist (i.e. Bali food, Java food, Sumatra food etc.) often based upon indigenous culture, religion and foreign influences, like Chinese, Indian, Arab and European-Dutch.  The presence of the Dutch led to adoption and fusion of European cuisine into Indonesian cuisine. Some dishes created during the colonial era were influenced by Dutch cuisine, including roti bakar (grilled bread), roti guava, selat solo (solo salad), bestik jawa (Javanese beef steak), semur (from Dutch smoor), sayur kacang mera (also called ‘brenebon’ – brown beans) and sup or sop buntut. Many pastries, cakes and cookies such as kue bolu (tart), lapis legit (spekkoek), spike (lapis Surabaya) and Kastengel (from Dutch kaasstengel/cheese cookies), pandan (chiffon) cake and klappertaart (coconut tart), cue cubit (derived from poffertjes/dollar pancakes) are typical fusion pastries. Outside of Indonesia, the most ‘authentic’ Indonesian restaurants can be found in the Netherlands. This is, of course, due to the historical ties. The rijsttafel has become part of the Dutch food traditions and is also expected to be on the menu of the many Indonesian restaurants in the Netherlands.

A cuisine made up of cooking traditions and practices from the Netherlands. Shaped by the practice of farming, fishing and the history of the Netherlands. Dutch cuisine is simple and straightforward. The menu was designed to keep body and mind healthy. The Dutch diet was relatively high in carbohydrates and fat, reflecting the dietary need of the laborers whose culture molded the country, and contains many dairy products. The fat and carbs would help keep mind and body in balance, especially during the cold winters. A menu without many refinements, it is best described as rustic, though many holidays are still celebrated with special foods. In the course of the twentieth century, this diet changed and became much more cosmopolitan with most international cuisines being represented in the major cities. The Indo Dutch community who migrated from Indonesia to the Netherlands after WWII, influenced the Dutch pallet even more by bringing their food traditions and added spices. The presence of the Indo Dutch people in the Netherlands led to adoption of Indonesian and Indo Dutch dishes in the Netherlands. In turn the Indo Dutch cuisine further evolved, influenced by local ingredients and cooking styles.

The Indo Dutch community may not have their own country, but the ethnic cooking style is very much alive. When we talk about the Indo Dutch Food Culture, we talk about the food and customs most Indo people were raised with and still celebrate. This includes adopted food, recipes based on authentic regional cooking from the different islands and ethnic groups in Indonesia, as well as the Indo Dutch fusion dishes.

This article was posted earlier on www.keasberry.com

Jeff Keasberry is a published author of two Indo Dutch cookbooks in the Netherlands and the first Indo-Dutch cookbook in the English language, which include extensive research on the history and development of the Indo Dutch food culture.  All three books have been well received by the International and Dutch press, and Jeff has appeared on Dutch national television and radio.