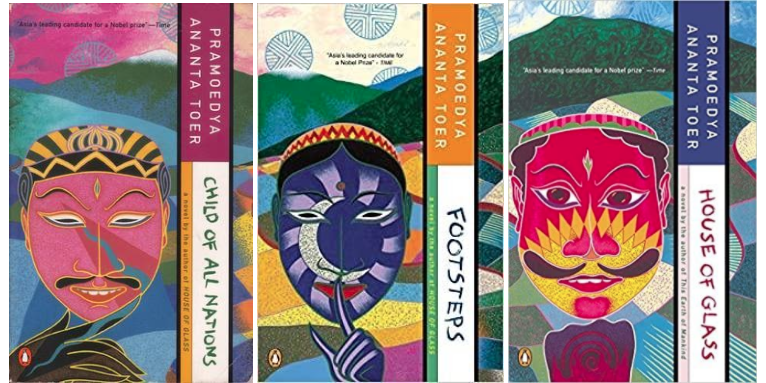 The Indo Project reviews book Tetralogy by Pramoedya Ananta Toer, a series of historical novels about the former Dutch East Indies. The author describes life in the Dutch colony around the turn of the last century.

The main character is Minke, son of a “regent”. Regents were the native Indonesian counterparts of the Dutch residents and often of lower Javanese royalty. As such, he is allowed to attend Dutch schools and learns the Dutch language. His European education allows him access to Western knowledge and different perspectives. Javanese thinking, customs, and culture evolve around mythical stories and events influenced by Buddhism, Hinduism, and eventually Islam. This leads him to slowly realize that the Dutch colonists will never see or treat the local population as their equals. Using his pen as a weapon, he starts writing essays which are published in a local newspaper in Surbaya.

After completing the HBS (Hogere Burger School) as the top student on the island of Java, Minke enrolls in the STOVIA in Batavia (now Jakarta). He studies medicine and ends up training as a Indonesian medical doctor to treat Indonesian patients. In the meantime, he meets people from different walks of life. This makes him realize that native Javanese farmers lead very minimalistic lives in poverty. As the son of a Javanese royal, he was never exposed to their lifestyle and now realizes that the native Indonesians do not stand a chance against colonial law and improving their living circumstances. Using his journalistic skills, he starts to write about the plight of the native population vs. the Dutch colonists.

Minke drops out of medical school and starts his own newspaper.  He gets more and more involved with the problems of the colonial caste system—with its strict separation of different classes. He becomes active in creating and supporting native Indonesian interest groups who work towards nationalism and independence from the Dutch. These were baby steps towards independence, which finally occurred in 1945 with the founding of the Republic of Indonesia.

The author was born in 1925 in Blora, on the island of Java. His sharp pen and social engagement landed him in jail on several occasions. He was banished for 17 years, without access to pen or paper. He verbalized the novels and finally wrote them after his release. He convincingly paints the most difficult transition period in Indonesian history—during which the Dutch are afraid of losing control of their colony and nationalists are striving towards independence.

The first two books are forbidden in Indonesia because at the time the government believed the author had communist ties.

This series is definitely worth reading. It depicts life in the former Dutch East Indies from a native Indonesian point of view.

Book reviewer Kareen Richard is a former TIP board member and is passionate about her Indo heritage.  This series of four novels intrigued her so much so that she felt felt compelled to read them. Doing so made her more aware that the wish for Indonesia’s independence started early in the last century.

Check out other book reviews on The Indo Project’s website:

Displaced, Disgraced and Dispossessed. How War Debts Still Haven’t Been Repaid to the Indo Dutch populatio

Have you written or read a book about the Indo culture or history that The Indo Project should know about? We welcome you to describe your book idea submissions. Submit your story!