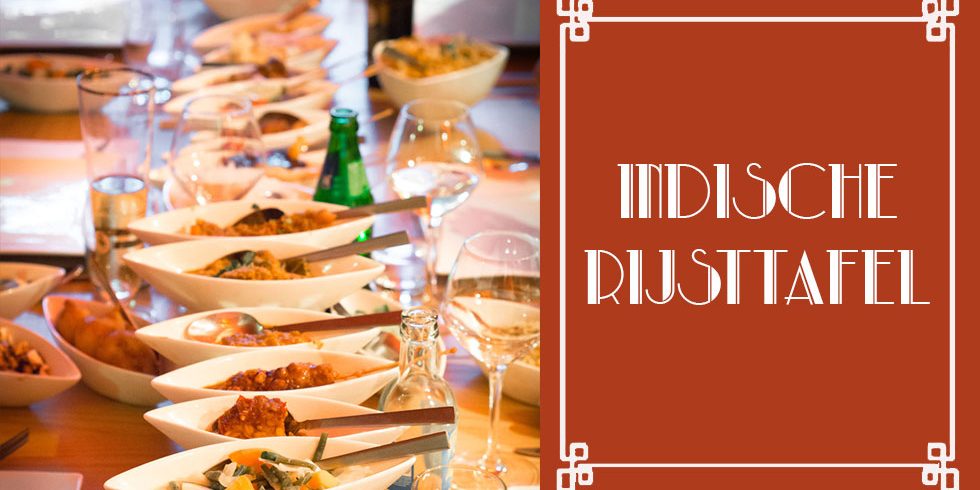 December 1st, 2015 is a historic day, as the traditional Indische* rijsttafel (a culinary icon of the Indische culture, with roots in the former Dutch East Indies), has been added to the National Inventory Cultural Heritage in the Netherlands. By finally acquiring the acknowledgement it deserves as part of Dutch culture, the Indische legacy will be preserved and passed on.

Much has been written about the popular rijsttafel and more detailed information can be found on the Internet.

*Indisch(e)— is a Dutch adjective, pertaining to the colonial mixed culture of the former Dutch East Indies. The Dutch colony in Southeast Asia became Indonesia after World War II.

The following text is a translation of what is published on the site ‘immaterieel erfgoed’;

Indische rijsttafel is a traditional and elaborate meal whose dishes come from various Indonesian culinary cultures. The rice table is made up of a multitude of carefully matched dishes that come on the table at the same time and are kept warm. Often the dishes are based on family recipes from the former Dutch East Indies, where the roots of this tradition lie. The trade of the East India Company and later the annexation of Indonesia by the Netherlands attracted many Dutch people for shorter or longer periods to Indonesia.

The concept of the rijsttafel was first introduced at the beginning of the nineteenth century. Several decades later, eating rice with some side dishes, especially as a warm midday meal, became popular among the Dutch in Indonesia, this was also called rijsttafel. After the repatriation at the end of the forties of the twentieth century, the Indische Rijsttafel became a tradition and an icon of both the Indische community as well as the returning soldiers and officials. The rijsttafel became for them the symbol of the former Dutch East Indies and part of their cultural identity. Since then, many cookbooks and even television programs were dedicated to this tasty phenomenon.

Indische rijsttafel is still popular, even among the younger generation—and not only those with ties to Indonesia. Rijsttafel has become popular again because it’s less labor intensive and easy to make, without compromising on taste and quality.

Here is some more information about the traditions added to the National Inventory:

When the Netherlands signed the UNESCO Convention for the Safeguarding of the Intangible Heritage, a broad, multi-faceted, and diverse inventory was an important wish. Intangible heritage is important for various groups and communities. What those groups and communities deem important, had to get a spot on the National Inventory. Not only the elderly but also young people had to recognize themselves in the list. Both local and nationwide traditions belong on this list. Even traditions cherished by one, but controversial for the others need to be inventoried. The inventory wants to promote mutual dialogue, an important objective of UNESCO convention.

The nine traditions that were added today:

By signing the certificate of the National Inventory, placement of these traditions is official.

The list of additions reflects the diversity pursued by the National Inventory. Technical crafts, like making syrup, were included. Traditions with culturally diverse backgrounds, such Tambú and Indische rijsttafel, have become part of the intangible heritage in the Netherlands. Finally local traditions, such as the Ouwe Sunderklaas on Texel, the Masquerade Parade in Brielle, and bonfires in Scheveningen, Voorburg, have been recorded. Although not everyone will have heard of these specific traditions, they are closely linked to local identity. The best-known tradition, but at the same time the most controversial in this group, is the lighting of consumer fireworks with old and new. The bearers of this tradition are explicitly seeking a dialogue and advocate for the safest possible use of consumer fireworks.

The National Inventory Intangible Cultural Heritage stems from the Dutch ratification of the UNESCO Convention for the Safeguarding of the Intangible Heritage, which the member states are obliged to map and document the intangible heritage within its own borders. Placement on the National Inventory has no value judgment. It only makes visible that what lives and moves in the Netherlands.

The Dutch Centre coordinates the National Inventory for Popular Culture and Intangible Heritage. More info about these traditions can be found on the website www.immaterieelerfgoed.nl. You can also contact them at 030-2760244 or by email at immaterieelerfgoed@live.nl

Photo: By Takeaway (Own work) via Wikimedia Commons