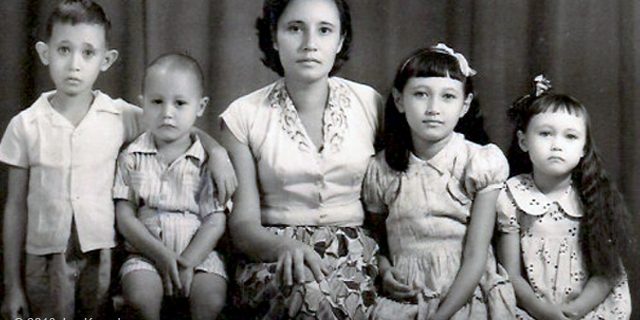 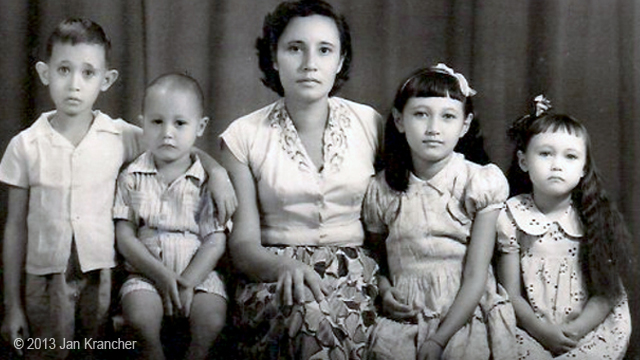 I was encouraged by my brother Jan A. Krancher who lives in the US, to commit some of my Indies memoires to paper. He is an author in his own right and has compiled and edited 24 stories in 1996 in a book on the Japanese occupation of the archipelago. (The Defining Years of the Dutch East Indies, 1942-1949…) I agreed with his proposal and that has resulted in this collaborative effort.  Over the years I have sent him reams of stories I have compiled and written. He now can weave pertinent facts into these tales. However, these memoires are not necessarily written in any particular chronological order but are presented to the best of my recollection, without exaggeration.

The Nippon invasion of the archipelago occurred in March 1942 and turned the entire economy upside down. All sugar cane planting operation ceased.

Our Dad seemed to have been employed “forever” in the sugar cane industry and worked on various sugar cane plantations in East and Central Java.  One that I remember vividly was in SF (Suikerfabriek) (Sugar Factory) Assam Bagoes in East Java. So now and again Mom would travel with us to Malang where our Indonesian Oma Poenish lived, on the pretense that she was ill and needed care. In order to get there by train, we first had to travel early in the morning by dogkar to the village of Sitobondo. The purpose for these trips was that often the Japanese boss was getting fresh during organized tennis matches. At times he wanted Ine and myself to visit him at his residence after the games time. However my Dad wasn’t born yesterday and figured out his scheme.

At one time Dutch we were placed in some kind of “protection camp” in Sitobondo and later in Pandji because the Indonesian natives became restless and went on the prowl   Only later in life I found out what the purpose was for this “internment.” An Indo Sergeant I worked with in Deventer, for the Netherlands Defense Department, told me how his family was butchered in the town of Banjoewangi nearby. Later on we were transferred to Kamp Kottok, a converted tobacco establishment.  Here the men were segregated from the women and sent to Kamp Baatan. Early on, we also lived at SF Gondanglipoero near Djokja, Central Java.

From Kottok, in rather cramp quarters, we were later transported via Jokja to Jakarta.  We were housed in Red Cross provided housing, were disinfected with DDT spray and handed clothing.  We were queried where we wanted to go and we ended up going by ship to Soerbaja.  Here we stayed a couple of months with our aunt and attended school.  Dad made many attempts to find employment and ended up finding a job in Malang with Social Services.

For us two, this was a favorable switch.  We only had to traverse the “kampong” where our Indonesian Oma lived on Oro-oro Dowo street and had to cross a wooden bridge over the Brantas river, to get to the new school in Tjelaket.  Eventually it was also closed down.  The term “kampong” has a negative connotation, almost as “low life.”  Our pure Dutch grandfather built a large home on Oro-oro Dowo street on an empty lot in the late 20s. Later on, native houses encroached on the property. Soon our Oma’s house was surrounded by these mostly dilapidated residences.  We didn’t take it as an insult when we were labeled as “living in the kampong.”

We certainly lived in an unsettling time period, a time of great uncertainty.  At night, rowdy groups of (rampokkers) cross our yard and we could track their every move, spying through shuttered windows in both of the front rooms.  They looked very menacing.  Fortunately they didn’t harm us because Oma was an Indonesian native. This couldn’t be said of other Dutch citizens.

At the time the Japanese took charge of the town, all people were forced to perform manual labor.  Taking First Aid classes was mandatory and the streets were kept clean by Dutch labor. Regular and routine preparatory exercises were also held in the event that large scale, all out war, would break out.  The entire community was recruited to engage in “gotong rojong”, an Indonesian communal effort towards accomplishing a mutual goal. There was a great shortage of soap, salt oil and rice.

I really don’t remember how we obtained our food.  That was a subject far from a 12 year old mind.  From early in our youth, we didn’t have any adjustment problems.  We already lived all along in a multicultural and multi ethnic society.

An incident I will not forget is when we were betrayed by a Javanese youth.  This resulted in an official visit at Oma’s place by a Japanese military man.  We were locked up in our room by Oma and Mom, as a precaution, and they confronted the man.  Later on, uncle Harry Klaare, Mom’s brother who worked in Talok, south of town, in the capacity of a telephone operator, came over by bicycle.

If I remember it correctly, our uncle went to the Kempei Tai (military security) to complain about these unwanted visits by the staff.  This resulted in no more visits.  Not long thereafter, all pure blooded Dutch and Indos alike, were interned in the protective camp in the Bergenbuurt……  The entire terrain was barricaded and surrounded with barbwire fencing.  However, this presented a rather unique opportunity for smuggling to take place.

Outside the fence, the people were very inventive and tricky.  When someone inside exchanged a bottle of vitamins, let say for a chicken, the next day the company try to return the bottle and complained that it was filled with sand rather than with vitamins.  Of course, they earlier on they themselves filled the bottle with pills made of dirt. But the trick did not work. On another occasion the traders succeeded in cheated Ine, who wasn’t the smartest to realize what was going on.  During the exchange across the fence, the other party jerked a perfectly good bed sheet out of her hand with nothing in exchange.

We often had to line up to obtain the same essentials – rice, salt, soap and oil.  Since there was no school we, out of necessity, entertained ourselves.   For example, there wasn’t any yarn so we had to split the material in half to extend the availability. During that time of incarceration,  people became inventive.  A native lady crafted lady clogs out of plain wood. This turned out to be very elegant and beautiful.  What also was done was to make sieves out of old tin sardine cans. They were hammered till it became concave, then holes were punched in it and a finally a string was attached to serve as a hand grip. 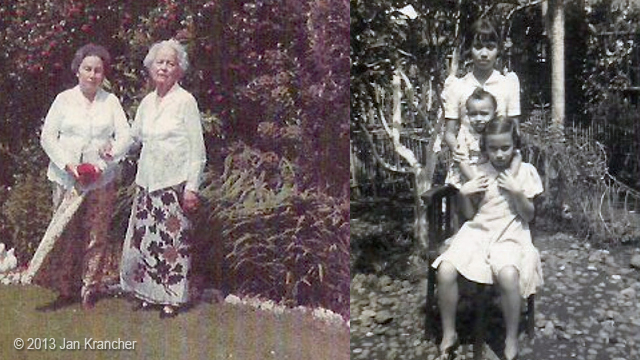 In reality, we didn’t really suffer hardship, thanks to Oma’s and Mom’s initiative and the help from the servants who always remained loyal.  We enjoyed our faithful brown dog, named Bruno.  What was so cute was that he had a clover leaf design on his rear end.  Unfortunately Bruno died a natural death.  On hindsight, this was a blessing in disguise because the Javanese were not always kind to dogs.

Trouble occurred when it came to tooth and molar trouble. There was a dentist on site but he didn’t have any medicine.  So he resorted to drastic measure and treated us  with cloves/tjenkeh.  This resulted in further deterioration of the teeth.  Fortunately overall we enjoyed relatively good health.

My two year older sister Bernadine (Ine) and I were attending the “Boering” school in that town.   A “mariner,” son of one of the teachers, came by the school to say farewell from his mother.  The scene was heart rendering! Not long thereafter, the school was shut down.  We were transferred to the “Zusters School,” a catholic institution, in part for town, called Jelaket, located across the Brantas River.  At least there was a bomb shelter there in contract to none the Boering school. Later we attended a four year High School on the Smeroe Straat. And with that diploma  in hand, I was fortunate enough to be able to raise all my four children.  In the final analysis, we have many blessing came our way. Most of the time we were a united family in spite of Dad’s occasional absences. 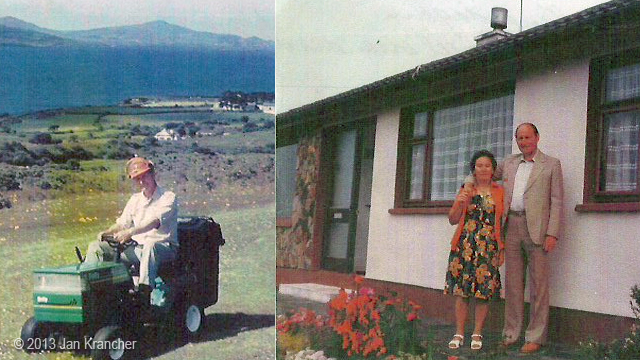