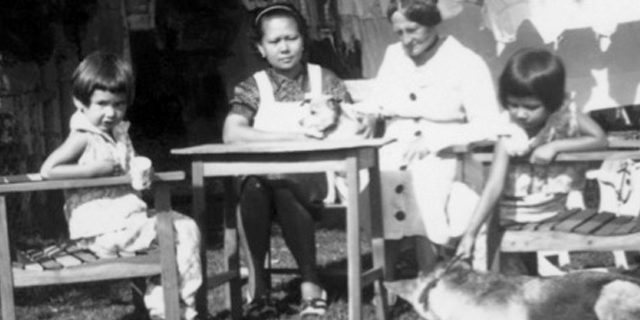 ‘Communities can be distinguished, not by their falsity/genuineness,

but by the style in which they are imagined’.

On 17 August 1945, after over three hundred years of Dutch colonial rule, (and several years of the British interregnum 1811-1816), Indonesia was proclaimed ‘merdeka’ (independent) by Sukarno and Hatta, and Indonesia as a nation began its period of struggle and consolidation. During the period known as Bersiap, (purge) after the end of World War II and before the Dutch relinquished their claims to the archipelago, many Europeans, Indo-Europeans and Ambonese were slaughtered or terrorised by pemuda (young men) with the fire of revolution in their bellies. In the words of author Hans Meijer, translated from Dutch by Rob Kramer (June 2010):

In Batavia (now Jakarta), posters called for the extermination of ‘Indische parasites’ and the slogan ‘Death to the Ambonese and Indos’ could be read on a building. The radical Indonesian populist leader Soetomo called for a vendetta against Indo-European bloodhounds …

Many camp survivors who had been interned under the Japanese, were forced to go on the run or stay in the camps, with their former camp guards now acting as protectors until American, Australian or British forces could rescue them.

After 1945, while the new ‘community’ of Indonesia was being established, several hundred thousand people who had called the Dutch-East Indies ‘home’ were now being forced to consider their fate. Most would have to leave Indonesia, never to return again. These traumatised migrants to countries such as the Netherlands, USA, Canada, New Zealand and Australia would often not explain more than fragments of their experiences to their children and grandchildren – silent for personal reasons or because of societal conditions in their adopted homelands. 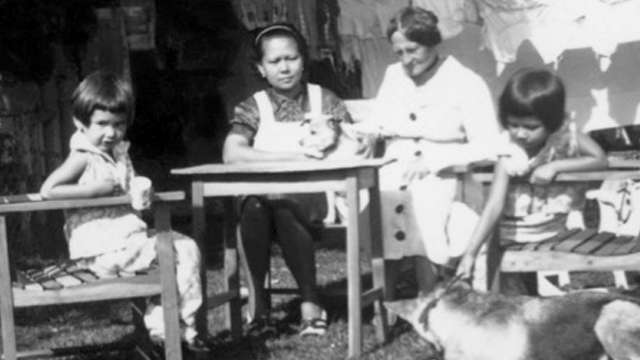 The author’s family in Bandung Java 1939

In my own case, the ‘Dutch’ side of my maternal family lived in what is now Indonesia for approximately one hundred and forty years (c. 1816 – c. 1957); the Javanese side for hundreds of years. The family were composed primarily of Dutch men who married Dutch women and brought them to the colony, or who married or lived with Javanese women (Lutter, 1992). I am also descended from Javanese Muslim Raden (royalty) – both male and female ancestors who lived mostly in Jawa Tengah (Central Java) and Jawa Timur (East Java).  My great-great-grandfather, Raden Hadje Abdulhamed Djochria had made the pilgrimage to Mecca, as symbolised by the inclusion of ‘Hadje’ in his name (Gillissen, 2011). To add to the complex family ‘melting pot’, my maternal grandfather was a European Jew; tried and slaughtered by the Japanese for being a resistance fighter in the underground operating out of Malang. [According to unofficial estimates, he was one of only about 2000 Jews living in either Java or Sumatra in the 1930s (Cassuto, 2005 – 2011)].

We count as European all those with white faces, who are not born in the Indies; all Dutch, English, French, Germans… even North Americans… Readers, …a European… in the Indies, is an entirely different being than in his own country… There he identifies himself so much with all that surrounds him that he no longer can be considered as a European, at least for the duration of his stay in the Indies, but rather as belonging to a specific caste of the Indische population… whose morals, habits and customs are certainly worthy of closer examination (Stoler, 1995: 104).

Ritter’s article expressed the colonial anxiety that the ‘true’ European identity was vulnerable in the tropics. The reality of life in the Indies was that intimate relationships between the Dutch, Javanese, and other ethnic and cultural groups, had been going on for hundreds of years; prior to the arrival of the Dutch, Chinese, Portuguese, Indians and Arabs had come to the archipelago to trade and some had settled and intermarried. Early in the VOC period, soldiers were encouraged to form relationships with indigenous women (as huishoudsters/nyais or converted Christian wives) but in the late colonial period, intercultural relationships were discouraged by the Dutch colonial administration.

The Tripartite Racial Policy classified people legally as ‘European’, ‘Native’ and ‘other Foreign Oriental/Chinese’ (Wiseman, 2000: 1). This patriarchal system was by no means simple or transparent; the ‘majority of those identified as European’ were actually ‘Indo-Europeans’ (or ‘Chinese-Europeans’) (2000: 1). Classification by race meant difference of opportunity in education, career and entitlement to social welfare (Stoler, 1995: 120-1). By the 1940s, 250,000 people in the Indies were classed as ‘Europeans’ though many, (if not most), of these people, were actually Indo-Europeans (Krancher, 1996: 5).

In Australia, it has been my experience that until recently, I have not been able to fully contextualise the stories of my maternal family from colonial Indonesia. For most of my life, I have felt as though we were some sort of historical anomaly; fundamentally ‘illegitimate’ in the scheme of things.

In 2009, I discovered a community of people who immediately understood my situation. Not only did they understand my ‘hybrid ancestry’ but they were keen to exchange stories and information about Indonesia’s history including Dutch colonialism, World War II, life under Japanese occupation and the period, known as the Bersiap.  The second and third generation descendants of those who left Indonesia after independence have now located the diaspora imaginatively in cyberspace. The ‘style’ in which the community is imagined is pluralistic, fluid, inclusive and empathetic.  Participants engage in detailed discussions about history, culture, language and family heritage; they may meet up with long-lost (or unknown) relatives and/or uncover previously hidden dimensions of their family history.

As it turns out, because of my interaction on social networking sites, I have recently discovered several relatives across the world; all descendants of an extended clan of van de Poels/van der Poels – some of whom originally came from the Netherlands to South Africa and then to the Indies. Many of our ancestors were born and/or settled all across Java, from Jakarta (Batavia) to Bandung, Garut, Tegal, Semarang, Ngawi, Madiun, Kediri, Besuki, Surabaya, Malang, Pasuruan, Probolinggo, Jember and Puger. One of my ‘Indonesian’ relatives lives in Yogyakarta and in April 2011, I met her for the first time when I travelled to Indonesia. She was keen to know more about her Dutch forebears.

Identifying as Indo may be controversial because of being considered (by post-colonial academics), as part of the legacy of colonialism. Young Indos may be stereotyped as coming from ‘affluent or regal’ families (Kebon, 2011: 2). In addition, for many years, the Indonesian entertainment industry has capitalised on the ‘perceived charm and allure’ of these ‘honey-milk skinned’ people who feel that they are trapped inside unrealistic social expectations of achieving high levels of fame and success (Kebon, 2011: 2). In 2011, Inside Indonesia published a series of articles on ‘Being Indo’ which highlighted both historical and contemporary issues about ‘bicultural’ Indonesians. For my part, when I went to Indonesia in 2011, I was acknowledged as a campuran (mixed-blood) and warmly welcomed in my travels.

In this twenty-first century, many possibilities to traverse and challenge national boundaries and concepts of identity present themselves. Most recently, innovative film projects such as Empire: The Unintended Consequences of Dutch Colonialism are using personal narratives to tell the story of Dutch global capitalism. Julia Suryakusuma, in describing the topic of Reggie Baay’s book (Nyai and Concubinage in the Dutch East Indies – Nyai dan Pergundikan Hindia Belanda) calls Indonesia ‘The Nyai Nation’. Certainly, it seems timely to engage with our imagined communities in cyberspace to learn more about how the personal and the political have been intertwined via Dutch colonialism.

* The original version of this essay was published in the ‘Shifting Cultures’ edition of
Social Alternatives, Vol. 30: 2: 2011, University of the Sunshine Coast & University of Queensland,
pp 44-47

Kathryn Pentecost is a PhD student at the University of South Australia, (School of Communications, International Studies and Languages). Her dissertation entitled Selamat Jalan, sampai jumpa lagi (Farewell until we meet again): Transcultural family stories from colonial and postcolonial Indonesia is expected to be published in 2014.

Anderson B (1991) Imagined Communities: reflections on the origin and spread of nationalism, Verso, London and New York

Gillissen A J (2011) ‘Towards Indonesia: Prelude to the Post-War Years 1945-46’ in (as yet unpublished) Memoirs, Adelaide South Australia

Gillissen A J (2011) ‘A Migration Officer’s Tale’ in (as yet unpublished) Memoirs, Adelaide South Australia

Krancher J (1996) The Defining Years of the Dutch-East Indies 1942-1949 – Survivors’ Accounts of Japanese Invasion and Enslavement and the Revolution That Created Free Indonesia, McFarland and Co., USA

Meijer  H (1945) (with translation by Rob Kramer) in ‘Anyone have access to National Library of the Netherlands?’ discussion in Facebook: Dutch-Indonesian/Indo community, viewed 27 August 2010

Stoler A L (1995) Race and the Education of Desire – Foucault’s History of Sexuality and the Colonial Order of Things, Duke University Press, Durham and London

Touwen-Bouwsma E (2010) ‘Japanese Minority Policy: The Eurasians on Java and the dilemna of ethnic loyalty’, Dutch-Indonesian Community website,  viewed 18 May 2010,