How to expel wind when you have masuk angin. 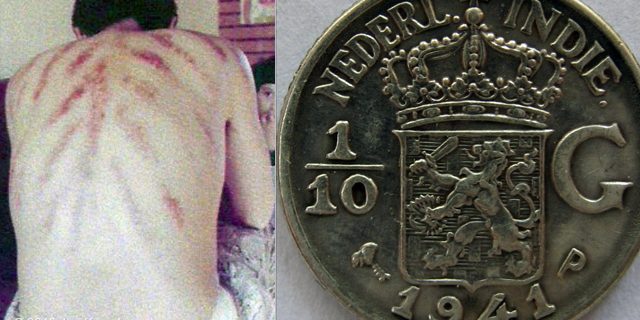 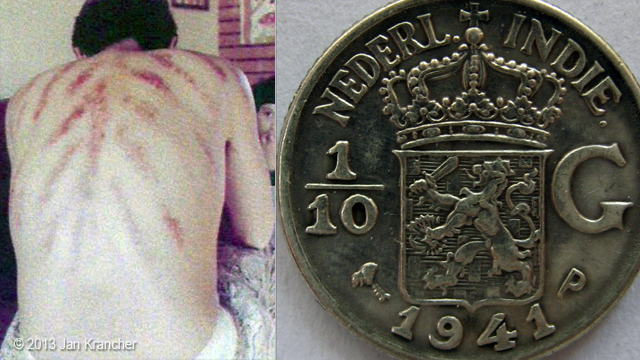 Have you ever been conned?  I am sure you have, at least once in your lifetime, as I have, and I won’t tell you how often.  But here I am not referring to being “conned” but rather being “coined.”  It is the practice that brings about long red welts or rash on your back, neck or chest.  In this article I will address the phenomenon of “to catch the wind,“ “wind illness, or catching a cold,”(masuk angin in Indonesian), the subsequent therapy of “coining,” (mengerok or kerik, in my 1955 Kamus Indonesia-Inggeris), its history and its application. A fancy Western term for this therapy is “dermabrasion.” In common lingo, it is sometimes called “scraping things out.”

Coining is one of the most common folk remedies practiced among Southeast Asians, apparently originating in China a long time ago. Most of the vintage Indos, those born in the former Dutch East Indies, now Indonesia, are familiar with this rather peculiar therapy.  My wife and I, both born there, use this approach when occasions warrant – sometimes quite often.  I have enjoyed college education and earned degrees in the sciences – agriculture, health and nutrition – but nevertheless often hearken back to this health belief and practice.  Some may call this belief voodoo science but I don’t care.  It works wonders!

My recent own “kerokan” prompted me to write this article that will hopefully, among other purposes, assist the 2nd and 3rd generation Indo to be more familiar with it. At least, I ask them not to judge their parents too harshly as being primitive and cruel, even “freakish,” though they may look like zebras with red stripes, when completing the “cure.” The outward manifestations may appear painful but really it is not that bad. Even if it doesn’t help, it doesn’t hurt. Besides, it is hands-on, in-house, self-care and is certainly cheaper than paying a visit to your doctor

Here is a for instance of my own past experience.  I was hired in the mid 80s as an environmental health consultant by a huge California engineering firm to assist in establishing environmental rules and regulations in a brand new city in the Kingdom of Saudi Arabia (KSA.).  I was authorized to bring my wife and three children along.  However, there was a six month waiting period before they could join me in kingdom.  So I decided to relocate them to the Netherlands where many of our relatives still reside and hence they were also nearer to me.  But after four month of separation anxiety, I could stand it no longer – I had tremendous heimweh – so I requested “home” leave that was granted.  I was badly “under the weather” as further described below.

Soon after my arrival in Den Haag, I begged my wife to give me “the treatment.” It didn’t take long for the familiar skin coloration to appear profusely.  I looked like a skinned cat and felt like one too (see graphic picture). I am a strong believer and proponent of this technique even though there is a paucity of data that support this folk medicine practice. Despite the lack of scientific evidence, numerous individuals in the Southeast Asian community who practice coining have faith in the effectiveness of the treatment, if not to heal, certainly to alleviate the agony of feeling blah.

Really, coining is a relatively simple preventive and remedial treatment to perform.  First, the area is massaged and a hot compound – not hot to the touch, but somewhat chemically “hot” – is rubbed onto the person’s neck, back, front and/or shoulders, depending on which kind of ailment is being addressed.  The ointment or oil used can vary from tiger balm to herbal liquid medicines.  We prefer to use “tjing tjau” medicated balm, the old standby.  This gooey formulation contains camphor, menthol, peppermint oil cassia oil, wax and a great deal of Vaseline.

Next, a coin, an edge of a spoon or lid of the bottle is rubbed vigorously and repeatedly, stroking down in a linear pattern.  This is done in one direction over the particular body parts such as the spine and ribs until red skin abrasions or marks appear.  These show up not ON the skin but rather IN the skin, in the connective tissue. The skin will not be damaged because it is already covered with balm as a lubricant.  Kerok or scraping things out is believed to pull the wind to the surface of the body thus creating a pathway in the skin through which it can be released.  The treatment is often accompanied with lots of burping, and – heaven forbid – sometimes with air release from the lower end of the anatomy. It is not recommended to take a cold shower afterwards because that could create complications.

The red Zebra-like marks, varying in shade, are believed to be the manifestation of underlying blood stagnation.  Small sub dermal capillaries rupture and results in sub-cutaneous bruising. The darker red the rash, the longer the stagnation has been present.  Real deep red/purple skin coloration indicates congestion with excess heat in the blood together with other impurities. In such an instance, it may take three to eight days for the redness to disappear, depending on how well the superficial circulation is restored.  Apparently, endorphins are also released during treatment.  Minor burns are the most common side effects. Of course, there is always a small number of people who will only have a minor, pinkish reaction, indicating that they are not that sick or that there is another reason why they feel out-of-sorts.

According to ethnographic studies, wind illness is a result of the four body forces or “humors” – wind, water, earth and fires – being somehow out of balance. And balance indeed is required to achieve and/or maintain health.  When an imbalance is perceived, dis-ease develops. In ancient China, the concept of yin and yang is commonly translated as “hot” and “cold.”  An excess or deficiency of one of these entities causes discomfort, if not outright illness.  To cure an illness caused by such an imbalance, certain therapies are employed to reestablish it and thus restore health. This concept of balance is also applicable to the concept of masuk angin.

It is surmised that an excess of angin causes specific ailments that can then be treated by releasing this wind.  Wind, it this instance, refers to an intrinsic force or factor. It is not a physical wind or air, but rather a state of illness when the body is out of balance such as from overwork, lack of food and sleep or exposure to variable weather conditions.  It is also assumed that it is a state whereby the body responds to known conditions such as tightness in the chest, trouble sleeping or eating, restlessness, cold, sluggish circulation, muscle and tendon injuries even indigestion and hypertension in extreme situations.  Sounds like some of my symptoms while waiting at the airport in KSA!

With the early influx of Southeast Asians into the US, this practice was rather controversial because these red marks, especially on children, was perceived by medical staff as being the result of physical abuse. However, the majority of those who cater to these ethnic groups have become aware of its effectiveness and the practice is now “tolerated.”  In addition, staff often also prescribe pain medication such as Tylenol or Aspirin and other western drugs according to the illness they wish to treat. Many Indos still use this technique to their advantage as well.

In conclusion, I hope that this article does not leave the reader feeling “conned.” Rather I wish that is has opened greater vistas, has piqued curiosity and has given an opportunity to apply this ancient technique of kerok or kerik yourself as an inexpensive alternative technique.  It can also be used in conjunction with western medicine.  I welcome questions and/comments and these can be directed to me via my email at indojank1@gmail.com.  Call (559) 731-4694 or 733-3083.