Here Are My Memories: The Memoir of Rudolf Van de Graaff 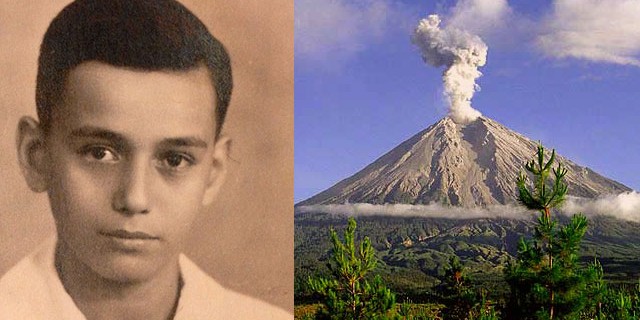 A special thanks to my cousin, Rachael Woodie; your detailed note-taking made this article possible.

Beneath the large presence of the Washington Monument, groups of summer campers, young families, and old couples mirror the hurried fountains at the center of the World War ll Memorial in Washington D.C. It is July, and last night’s storm clouds are still pressed up against the city. This is my first visit to the Capitol and with the recent passing of the 70th anniversary of V-E Day, I am reminded again to consider the devastating impact of WWll.

Recording my Oma’s—and now my Opa’s—stories for the Indo Project, I am moved to reflect on why it is important to accurately write about the past. While each personal history preserves culture and speaks out against injustice, memories like this urge us to be critical of our own actions and biases, because cruelty motivated by difference is unacceptable.

“One day I remember Mum and I were sitting on our balcony and an Indian man came walking towards our house—chased by the dogs. He could not speak Dutch or Indonesian but said in broken English: fortuneteller, fortuneteller, very good, only ten guilders. Ten guilders was a lot of money, so Mum bid to only pay five. He told my Mum: one son is going away but he will be all right, your husband will also go away but not for long, and another son will go away but may never come back, the rest of you will be okay. I did not understand what he was saying at the time and walked away.” ~ Erich Marius Van de Graaff (Kik)

My name is Rudolf Van de Graaff and I was born and raised on the Kaju Enak, Sweet Wood, tea plantation in East Java, Indonesia. Growing up on the slopes of Gunung Semero, the nearest town, Lumajang, was a thirty-minute drive away. I was the youngest, with three older brothers (Tjitjt, Louke, Kik) and an older sister (Conny). We had a large house with thirteen front steps that led up to a veranda and fireplace. In March of 1942, I woke up from a nap to find Indo soldiers laying under the large shade trees in our front yard: they were everywhere. My mum said they were planning on going into the mountains to the Lumajang POW camps. World War ll had finally reached us.

A few weeks later my father was called into Lumajang; my older brothers Louke and Kik were soon to follow. I remember them disappearing together on a pushbike, dust rising up behind them like a slow white smoke.  In town, Louke’s name was called and he quickly departed in the back of a large military truck. Kik returned home alone. Not long after, the Japanese took over our tea plantation. They repossessed our vehicles, home, and dogs, Bruno and Teddy. My mum was never afraid of the Japanese soldiers; we took two cows, two goats, and our dog Cheffy, ten miles down the hill to a family friend’s house. One morning Teddy and Bruno showed up at the Andersen’s house, only to be taken away again—but not for long. A week later, Teddy came back alone.

During this time, we were taken in by Indonesian neighbors. My father was well respected by the locals and they kept our whereabouts hidden from the Japanese.  As we moved around, Kik and Conny had to hide whenever the police or visitors came to call. Because my siblings were older, they had to avoid placement into POW camps. We lived without electricity, phone, or running water. During the dry season, we would walk five miles to the river and haul water back. In the summer of 1945, we received news of Louke’s death from the Red Cross. The fortuneteller’s prediction had come true. Around this time we heard about the end of WWll and the beginning of new conflict between the Dutch and Indonesians.

“When I was picked up, we had to walk, no riding in trucks. On the road to Sundoro everybody was screaming MERDEKA (freedom). At the local police station, I was put in with another fellow I did not know. He told me that Indonesia and the Netherlands were at war and to save my head I had to call MERDEKA! We were taken to camp. The food was scarce and our beds were full of lice. After a few months, we had to fill out forms whether or not we wanted to become Indonesian citizens. I did not fill out a form. In September 1947, all the real Dutch were rounded up and we left for Probolinggo, a big camp, were I met my Mum, Conny, and Ruud.”  ~ Erich Marius Van de Graaff (Kik)

We stayed at the first Indonesian POW camp for about a year. One day we received a letter from my father, who was safe and living in Dutch-run Palembang, Sumatra. Soon after, all the mothers, children, and young men were moved to another location. At thirteen, I was left behind with the other young boys (ages ten to fourteen).  A few months later, we were told to pack our things—we had nothing—and get into large trucks. We had no idea where we were going. At the next camp, I reconnected with mum and Conny. We left again for another camp, that night by rail. Our train only traveled by night. The next camp was large with squalid living conditions; all the people were underfed. We were given a bowl of rice and jackfruit soup twice a day: many Indos did not make it. After a month, we were loaded onto another train headed for Bandung in West Java. Before reaching our destination, Dutch and English soldiers liberated the train—they sprayed us, I think it was with DDT, washed, dressed, and fed us.

By 1949, the Dutch had surrendered colonial control of Indonesia, which triggered an exodus of Dutch and Indo populations. In 1954, at the age of twenty-one, I left Indonesia with my mother for good. My father stayed in East Java to work for the Dutch army, Conny married and moved to New Zealand, and Kik had already left for Holland earlier that year. My Dutch and Indo ancestors had lived in Indonesia since the fifteenth century and when we set sail for Holland, I looked back.

“Every week new families arrived to get a room in the hotel (Hotel Amecitia). One day it was snowing very hard and exceptionally cold. My sister and I were looking down out of our hotel window and saw a bus stop in front of the hotel. A tall guy with dark hair got out of the bus, stepped on the snow, and fell backwards on his butt! My sister and I laughed so hard! I told Grace (my sister) you can have that clumsy ox! But guess what? Five years later I married him.” ~Jane Van de Graaff