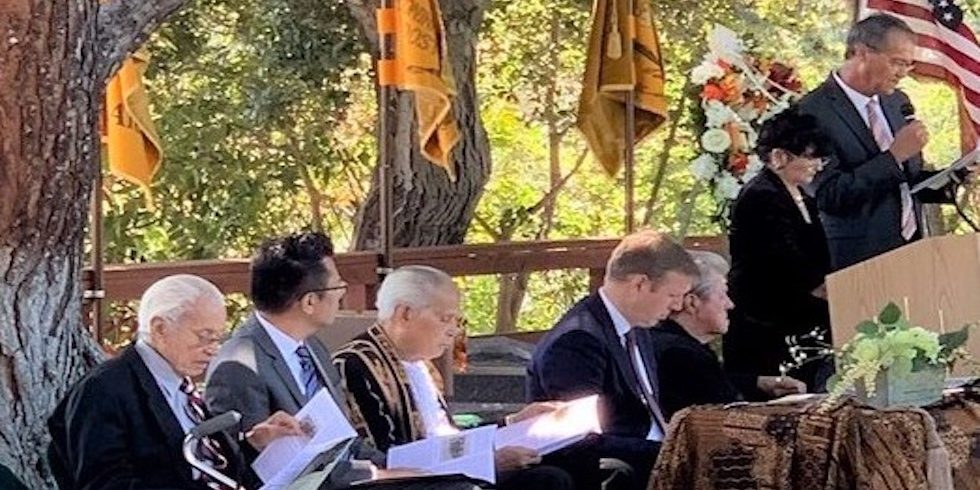 Submitted by Ingrid McCleary
A touching ceremony, hosted by Henny Neys & Gijs Axt at the Oakmont Memorial Park in Lafayette, California, now in its seventh year started with uniformed honor guard led by Jesse Eijsbroek who flew in from Holland for this event.

Gijs Axt at the Oakmont Memorial Park in Lafayette, CA

Jeff Campbell, played Danny Boy & Amazing Grace on his bagpipe and the 40-50 guests attending joined in a number of songs; songs in Dutch, English, Indonesian.

Featured speakers were the General Consul of the Netherlands, Gerbert Kunst; Jim Douwes, former president of NESO; 40-year old Louis Heysteck who was born & raised in California but taught himself to read & write in Dutch and shared the experiences of his Oom Antonie Heystek during WWII, whose cross sits in the Ereveld in Indonesia.

Henny Neys & Jim Douwes took turns reading the experiences at Tjideng Camp by Loes Weynschenk & Gaiety Breukers, an account that reverberated with many of the guests.

Then, right before Max Lokollo led the group in a sweet rendition of Ole Sio, he decided, right then & there to share a horrific experience he witnessed when he was just 6 years old. His words had never found light in the 77 years that had passed since that experience; he had not uttered a word of it to anyone, not even his wife; indeed, he was forbidden to talk about it with his family, like so many other families who could only survive the horror if they buried it in their past.  TIP is helping them to “Honor the past, preserve the future”.  I asked him if he would allow me to share this part of his story with TIP and he nodded.  We talked some more, where he divulged even more than he’d shared on the podium.  It was what touched me the most, that at last, he could release the intolerable weight of this burden from his soul.

Later, when I looked for photos on Facebook to complement the few I had taken, I saw that Mabel, Henny’s daughter had placed the TIP flowers & the Indo Pride pin on Alan Neys’ gravesite marker.

I was humbled when I saw it & received Mabel’s permission to use a few of her photos for this article.  Alan Neys, an Indo, felt strongly that something more needed to be done for the Indos left behind, now living in poverty.  When he passed, Henny created the Alan Neys Memorial Fund.  You can read more about Henny and the ANMF here:  https://tinyurl.com/y67bmson

I am thankful that I, a 2nd generation Indo, can attend so that I can honor my Opa who perished on the hellship, the Junyo Maru. My daughter, a 3rd generation Indo, has come to the last two ceremonies with me. It resonates with her as well… and in this way, we are preserving the future of a culture worth knowing.
Categories: Blog, NewsBy The Indo ProjectSeptember 5, 2019Leave a comment
Tags: Commemoration CeremonyHerdenkingindomemorialThe Indo ProjecttheindoprojectTIP