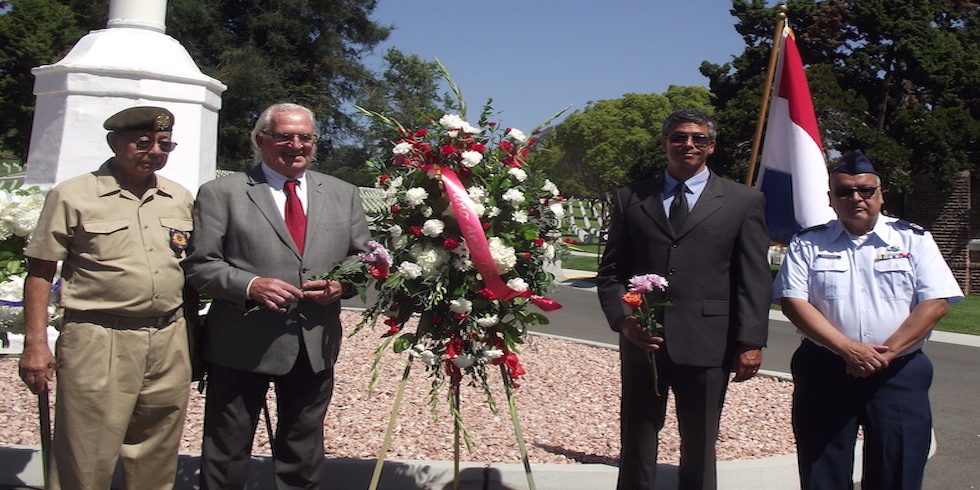 On Saturday, August 10, 2019, The Indo Project board member, Eric Morgan, was honored to lay a wreath on behalf of The Indo Project at the annual commemoration ceremonies ‘Herdenking Ceremony,’ which was held at the National Cemetery of Los Angeles.

Approximately fifty people came together out of respect for the fallen forces and civilians who lost their life in the former Dutch East Indies during the Japanese occupation and the ensuing Bersiap period.

After a moment of silence, the flags of the Netherlands and the United States were saluted, presented during the entrance of the Honor Guards.

The national anthems for both the United States and the Netherlands then sung by all who attended.

A word of thanks was given by Sandra Van Lommel-Ly, the Master of Ceremony and the new head of the COMMITTEE AUGUST 15, 1945.

The choir sang two moving hymns: “How Great Thou Art” and “The Battle Hymn of the Republic”.

After the Lord’s Prayer was sung by An Schoenfield, the wreaths were laid in respect of those who lost their lives during this period of the war.

The playing of taps concluded the ceremony, as everyone was given a single flower to place upon the 2002 monument that is permanently in place at the cemetery. Folks then retired to enjoy snacks and beverages, as well as enjoying catching up with good friends.

A special note: Sandra Van Lommel-Ly is understanding of the fact that there are many reasons why those in the Indo Community would like to attend but cannot. Other means of support are always most welcome.  For those who wish to do so, you can reach her by email: Sandyly_Ly@yahoo.com, or by mail to 10157 Alburtis Ave., Santa Fe Springs, CA 90670.  Next year will be the 75th Anniversary of the Herdenking 2020; let us help support her and the dedicated Committee, who have kept it alive all these years!