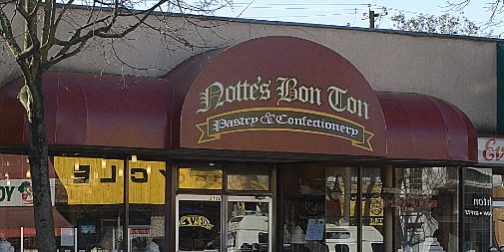 The Power of a Grocery Store

A new environment, new food, new customs and everything familiar left behind.  We usually do not think of a grocery store as being significant in our daily routine.  But when you find one that has the ingredients of the country you left behind it’s like a homecoming for the soul.

In the late 1950’s – early 1960’s there was no place to be found where one could buy sambal, or trassi or tempeh.  In fact it was impossible in North America.  The closest thing was a Chinatown if you were lucky to have one in your district and even then it was not the same.  This added to the sense of cultural isolation, particularly in the 1960’s.  Our parents made do and used substitute ingredients.  I don’t know how my mom did it but she always came up with something creative that was delicious.

In the early days around 1964, my family heard of a fabulous European bakery all the way up in Canada.  It was simply impossible to get the quality baked goods we were accustomed to in Holland.  The direct route was Interstate-5 all the way north across the border about 4 hours away.  My relatives from Portland, Oregon, which was just under 4 hours south of us on I-5, would drive 16 hours round trip stopping to visit us halfway so they could get these wonderful European pastries in Vancouver, B.C.  They came back with boxes of pastries.  This was the Bon Ton and it still exists today.  Only an immigrant would drive great distances to get a good cream puff.

In the early 1960’s my father came home all excited to tell my mother he had discovered an Asian grocery store with all kinds of Indonesian and Dutch ingredients.  They were over the moon.  The owner is a diminutive Vietnamese lady with flawless skin.  She remembers what each customer’s favorite items were.  My parents are gone now but incredibly she is still there – and her skin is still flawless. Every time I enter the store now it’s a comforting feeling because there is a history and an understanding. She remembered my mother liked the dry salty fish and my dad liked the deep fried sesame balls.

“That Dutch bakery in Marysville”.  I’ve heard this for many years and never knew the actual name.  It became such a common destination that everyone knew immediately what place they were referring to.

The Marina Market in Poulsbo, Washington has a remarkable story.  This store has been a magnet for dispersed Indos living on the Kitsap peninsula in Washington state.  It’s a big state and people on that side are mostly restricted to ferry transporation to get to the other side of the sound.  It is marketed as a European grocery store and is situated near a marina so it caters to boaters, hence its name.  The store has many Dutch and Indonesian ingredients, as well German, Danish and other European items.

Every November for their customers they host an open house and offer a free meal. The buffet features all the products in the store so one can get a taste of everything.   Over the years, this open house has also been indirectly responsible for reunions of old friends and  the creation of new friends amongst the Indo community in this area.  Several in the group were former neighbors in Holland over 40 years ago reconnected on this peninsula in this little store.

This Dutch and Indonesian grocery store is advertised in De Indo magazine and is a point of reference for many living in southern California.  Perhaps some of our California friends can add some background information about this store.

Several people have talked about a bus or van that used to travel around selling Dutch and Indonesian items in the early 1960’s in southern California.  Das Williams mentioned it in his interview (see Indo Profile) and the man’s name was Timmerman.   If you have more information about this traveling grocery store please contact us at  info@h80cr.hosts.cx.