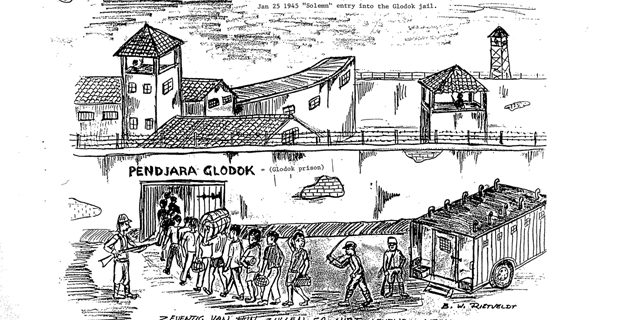 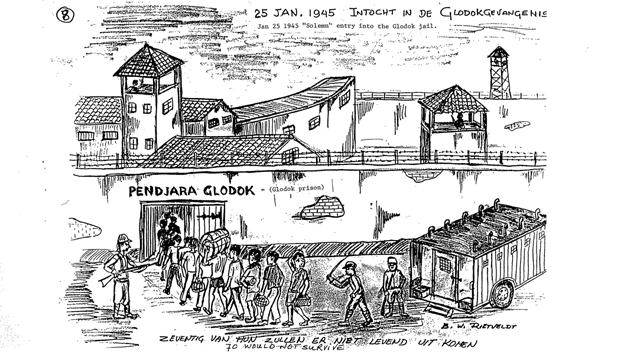 The “Glodok Affair” is a little known chapter in the events that occurred during World War II in the Dutch East Indies.

In mid-1944, a man named Piet Hein van den Eeckhout was released from the Japanese Civilian camp in Tjimahi because he vocalized his pro-Japanese feelings.  A number of same-minded others were released with him.  Their task was to seek out young men who would support the Japanese and the Indonesian cause for independence.  This was accomplished by conducting a so-called loyalty poll amongst young Indo men aged 16-23.  They thought that this would not be a difficult task, but they met with more resistance than they had counted on.

On September 27, 1944, a group of 46 of these young men were arrested in Batavia (now Jakarta) for refusing to show loyalty to the Japanese and Indonesian cause and put in various jails. Even though van den Eeckhout and his men tried to coerce the young men, they continued to refuse and held fast to their loyalty to the Dutch flag and Queen, for they were Dutch nationals, after all.  As a result of their continued refusal, the young men were transported to Glodok Prison in Batavia (now Jakarta) on January 25, 1945.  My father was one of these young men.  During the period of Jan. 25 to Mar. 15, 1945 an additional 350-400 were arrested during raids in Cheribon, Tegal, Pekalongan, Semarang and Bandoeng, and transported to Glodok as well.  Seventy five perished as a result of the tough regimen, which included cruelty, mistreatment and malnutrition.  The remainder of the young men was released on August 25, 1945, ten days after the Japanese capitulation.

What follows is a sketchbook made by one of the imprisoned young men, B.W. Rietveldt, and provided to us courtesy of Mr. Charles Koot of Watertown, MA.  Mr. Koot was one of the young men imprisoned at Glodok who thankfully survived.  The sketches depict the dire circumstances in Glodok prison and are captioned in both Dutch and English.  For those interested, further information (mostly in Dutch) is available at De Java Post www.javapost.nl and on Wikipedia.

More pictures will be posted soon.