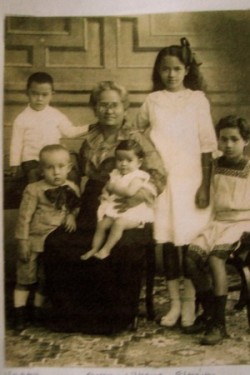 Several years ago I received a big envelope with old family photos from a tante (aunt) in Holland.  She had been researching our family geneology and heard that I was interested.  I never knew this tante until we met in 2005.   All the children in this picture are first cousins.  Two boys and three girls (all sisters).

The little boy in the upper left with dark hair was born a mongoloid and had diabetes.  His name was Harry.  He was a very sweet child and everyone loved him.  He died at age 16 of “zuiker zieknes” or “sugar sickness”….I ascertained that it was complications from his diabetes.  The little boy in front of him is Max.  He took on the Dutch features with blondish hair and fair skin.  Max was an only child and went on to have his own family of two sons.

The oldest cousin is the girl with the big bow in the rear standing up.  She is my Tante Ellie (real name Elmire).  My mom spoke fondly of her as she was like a second mother to her because of the age gap of 11 years.  During the war  this tante made what we would call “peanut brittle” and sold it to keep them afloat while all the men were away.  I don’t remember the Indonesian or Dutch word for it, but I’m sure it was kajan something.  A well-read woman she kept up with world news until the very end.  Her house was filled with newspapers and magazines and I remember she had several radios with a set station on each one so she did not have to change the dial each time for her various programs.  The little girl to her left (our far right) is my Tante Juul (real name Julianna).  When my opa (grandfather) would get ready for a hunting expedition with his comrades Tante Juul as a teenager got the job of cleaning the guns.  That’s the closest she got to participating in the expedition.  This tante is remarkable for her 18+ trips back and forth between America and Holland since the 1960’s.  She was 95 years old on her last trip.

The baby on oma’s lap is my mother at probably 6 months old.  I didn’t know this until just a few years ago, but she almost died in a fire.  Tante Juul told me when they lived in Sumatra where my mom was born the house caught on fire one day.  My mom was an infant sleeping in her crib in the back part of the house.  Everyone ran out for safety and then realizing what happened, they all shouted “The baby !”.   Her father (my opa) ran back in time through the smoke and flames, scooped her up and brought her out of harm’s way.  Mom never told me this story.  She did tell me though about being bitten by a horse.  She had the scar to prove it on her upper back.   She had an apple in her hand and was near the fence to pet a horse.  As she turned around with the apple in her hand the horse bit her back because he wanted the apple.

Last but not least is Oma Lazare.  She was quite the matriarch. A stern woman with a great passion for her family.   She married two times.  Her first husband was Piet Keyser who turned out to be not a nice man.  Her second husband was Theodorus Wilkens, a Dutch country doctor.  Together they went to the kampongs (villages) and administered medical treatment to the native Indonesians.  One story stands out in my mind about Oma Lazare.  She was sitting in the courtyard one day and heard a loud thump on the marble floor in another part of the house. Immediately her instincts kicked in and she knew it was the baby.  This baby was Mary who was born before my mother. Apparently  the baboe (nanny) was holding the baby in her slendong(sling) and the baby fell out of it landing head first on the hard marble floor.  The  baboe was immediately fired.  The baby died.  My mom’s firstborn is named after this baby.