From Malang to Gothenburg 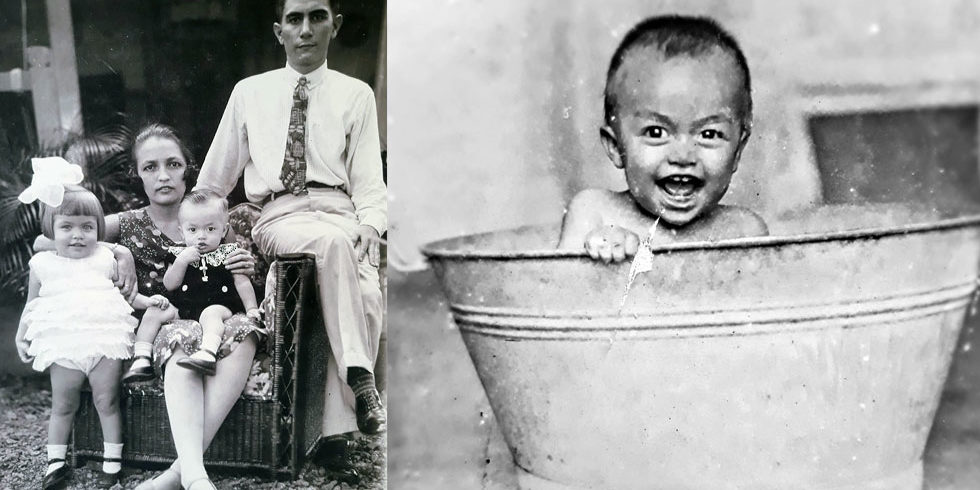 [Featured Photo: From Left to right: sister, mother, Oscar and father. Oscar in tub in Malang]

At a very young age, growing up in Malang, I was admitted into a military hospital with Bacilary Tifus. After a difficult time, I slipped into a coma. I received the last rites after the doctors said they couldn’t do anything else for me. As my mother, crying inconsolably, was ready to take me home, the doctors decided to try one more time by adjusting the treatment and doubling the saline dosage. After the last treatment, my mother sat by my bed for five weeks. She stroked my face and called my name every day. Finally, I gave a sign of life – she saw my lips move. God wanted me to live. She yelled: “Nurse, nurse!” and that’s when I woke up. 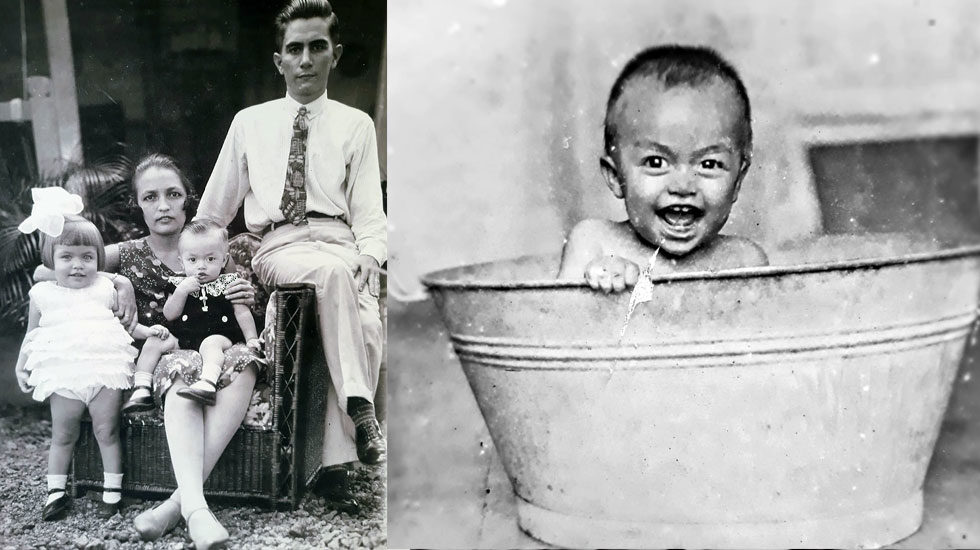 From Left to right: sister, mother, Oscar and father. Oscar in tub in Malang

After I had fully recuperated, my Dad was transferred to Magelang to take a position as military cashier. Two years later, in 1938, my father became deputy military cashier on the Kalidjatie Airbase. In 1940, we moved to the Singosari Airbase near Malang, because of World War II in Europe. We lived temporarily with my grandparents as our house was being built near the Singosari, which was eventually bombarded and destroyed.

After the Japanese invaded, my father was taken as a prisoner of war (POW) and transferred to Ambon. There was also no money from dad anymore. We also couldn’t go to school. I was 13 years old at that time. I told my mom I would look for work to support her, my sister and my two little brothers. I went to a factory and asked the director: “Sir, do you have work?”. The man asked if I had any skills. I answered: “not many”. He felt sorry for me and told me to follow him. He put me to work: filing brass blocks squares of air gauges. There were many Indonesian workers and a couple of Indo people. Every day I worked from 7:00 AM to 12:00 PM, which proved to be enough to buy rice etc. 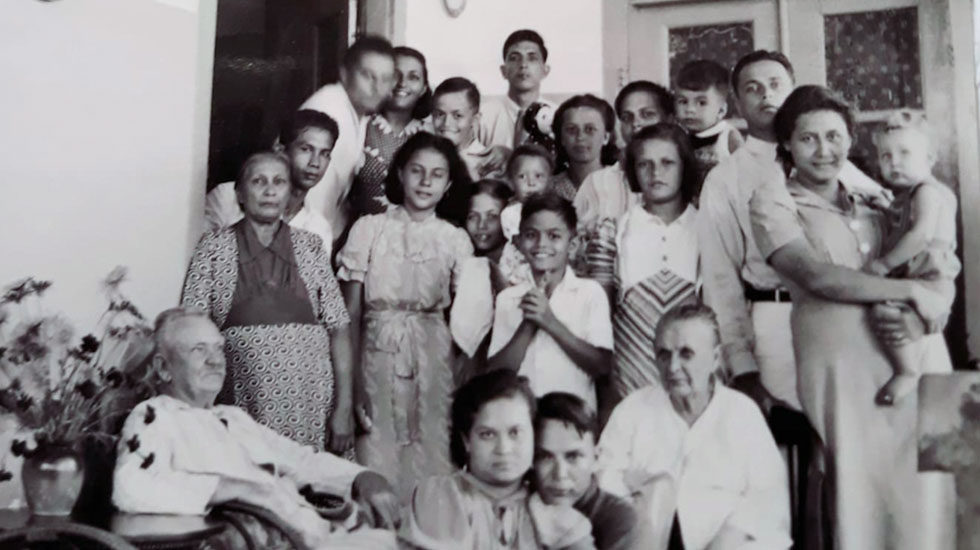 My grandparents and their kids were moved to the Ambarawa concentration camp in Malang. My mother was not taken, probably because of her married last name Nicola von Furstenberg (her mother was Sibenhar). Before the Japanese military forces had taken/annexed my grandfather’s car repair store, they came into his office and asked him to cooperate with the Japanese. He told them:  “I am German, but not a friend of yours”. The following week, three other officers and one civilian came. My grandfather got so angry, that he was picked up to be taken to the concentration camp the following week.

After three and a half years, my father was released from prison and returned home. This lasted only for a short time. The Indonesian revolution, Bersiap, started two weeks after the Japanese capitulation.  My father had been home for eight days. We had all just sat at the big table for lunch, when two military cars stopped in front of our house. Three men entered our house and said: “Sit still and eat first!”. My mother, father, and I and two other Indo men (neighbors) were sitting at the table. All men 16+ years of age had to come with them to be registered at the city police office. I said to the driver: “Sir, sir, the police office is there, where are you going?”. It turned out we were on our way to Lowok Waroe, the big state prison. The gates were wide open, and that’s when I knew what was going on. We were lured away with a ruse.  I was 16 years old then. My mother was still at home.

The walls of the prison were six meters high. There were several different buildings and each building had thick bars. In peacetime, one of those buildings would imprison about 25 people. When we arrived, around 40 people were kept in one big room. There was a hole in the floor that served as a toilet. One big barrel with water. We could go outside three times a day—just to get some fresh air or use the bathroom. All those who were imprisoned were not prepared. They only had the clothes on their backs. No blankets.

Soon after, we were taken by the Indonesian nationalists and imprisoned in the large Lowok Waroe Jail, still without clothing, mats, etc. We were locked up for 3 months with no mats on the floor. We slept on concrete. We were allowed two 15-minute sessions outside to get some air. We were locked up with 25-30 men in a large prison cell. Next, we were transferred to the Aloon Aloon prison.  That prison was very inhumane. The old folks suffered the most. One day, a delegation from the International Red Cross came to see how we were doing. They concluded there were too many people in one cell. 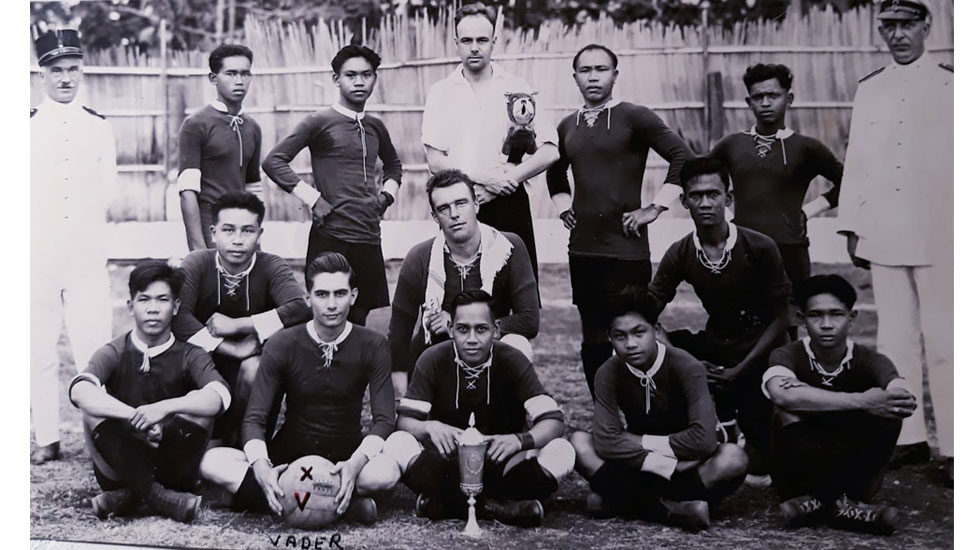 As a result, we were transferred to the large old women’s prison in Malang. We got more freedom there. From 7 AM onwards we were outside and allowed to exercise. The food was slightly better. I also got a job in the kitchen—which meant extra food to share with my father. The children played bridge under the area where the bunk beds were.  The elderly conversed amongst themselves or slept the whole day. We would get crispy rice for breakfast with a mug with tea. For lunch we got rice and corn and a bowl with vegetable soup—just a bit of bouillon with green leaves.  We called it chicken food in the Indies.

After about a year, we were picked up and taken to a station where we joined my mother, sister, and brothers.  They had been moved there from the women’s internment camp. We were transported to the station around 11:30 PM and were put in trains with blacked-out windows. We were then taken in a car with blacked-out windows to the POW camp in Soerakarta. After three days we were transferred by the English military in Dakota airplanes. They flew us to the Tjilitan military airbase, near Jakarta. From there we moved to the Mangarai POW Camp and were freed—after all that misery. My father went back into the military and after 14 days we flew back to Andir Airbase near Bandoeng where he became deputy to the Lieutenant and sworn in as officer. I started working as assistant mechanic and went to take evening classes to become a car mechanic.

In 1948, during his time on the Andir Airbase, my father went on sick leave to the Netherlands. He was entitled to this leave because he had been a POW for so long. We arrived in the Netherlands on the MS Oranje in May of 1948. My father became Captain at the Royal Airforce. I signed up at the Royal Navy for six years. I was educated in Voorschoten and received Technical Training at the Royal Navy in Amsterdam. In 1949 (1.5 years later), the 2nd ‘politionele acties’ (police action) took place. Thousands of Dutch military were sent to Indonesia. I was sent with the ship ‘SS Waterman’—a USA converted troops transport ship. It took us four weeks to get back to Indonesia. I was 19 years old and stationed at the Airbase Tandjung Priok. 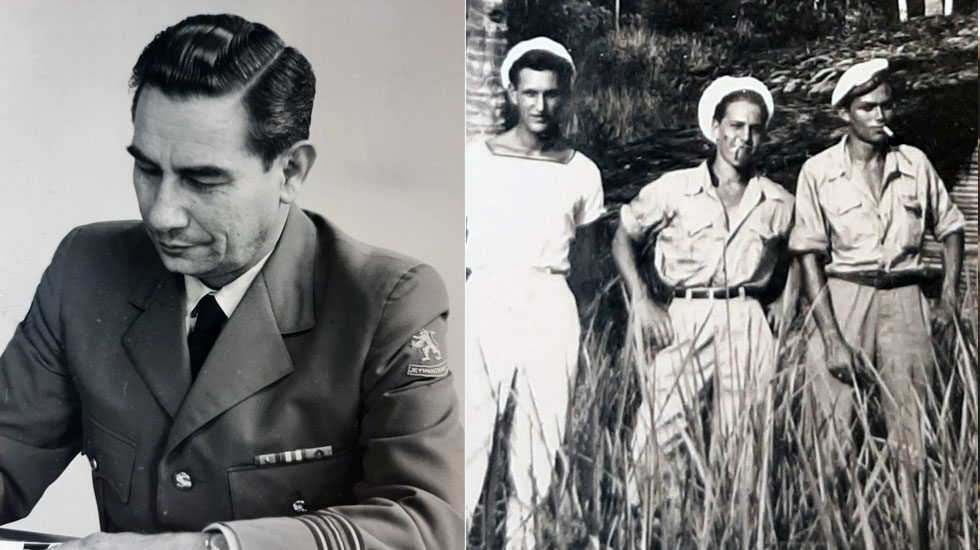 After three months, I took the hydroplane Catalina to Soerabaja Navy Establishment. I was put on a patrol boat RP111. Our patrol area was Banka Biliton and Malaka Straits, Sumatra. Indonesia was promised support from the Netherlands, as Indonesia did not have the policing resources.  We worked for two years under Indonesian flag, and below that the Dutch flag. This was after the ceasefire and declaration of independence. It was then established that certain tasks would be covered by the KNIL. After the transfer of sovereignty, the KNIL was requested to keep assisting the Indonesian army. I was asked too, but I declined as I had family in the Netherlands. 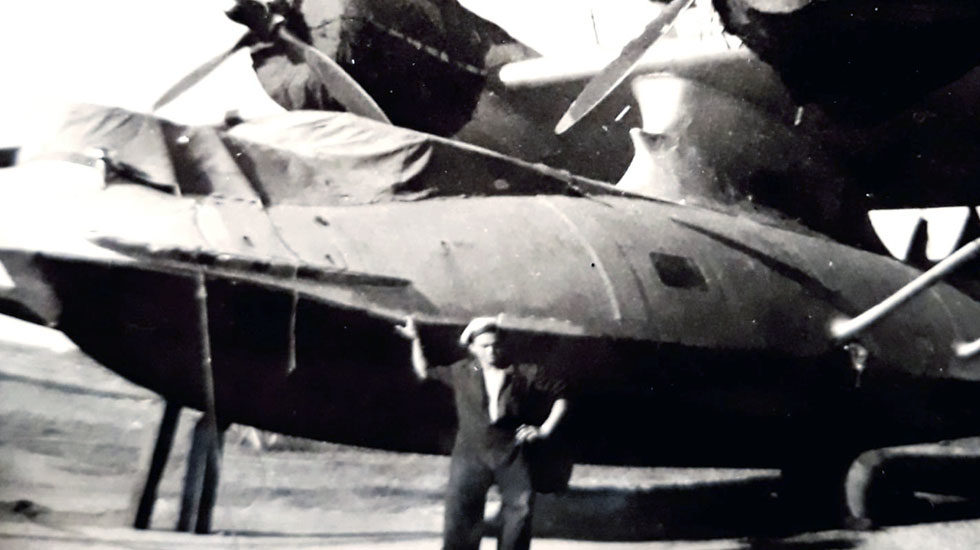 Oscar and his Catalina

For two years I was the designated translator, as we patrolled the sea to check for smugglers in money, weapons, and drugs. I was the first to jump on to the boats that needed to be searched. I would ask the captain for his papers and told him to speak to our commander in chief. I carried a gun for defensive purposes, but luckily never had to use it. A funny story from that period is when I would board the Chinese boats. I would immediately ask: “Who is the cook? Make me Bami Goreng!”. We met many fishing boats. They too were stopped and had sharks and other fish: “Give us fresh fish, and we will give you canned food!”. That was a beautiful time.

After surrendering to a free Indonesia, we returned to the Netherlands in 1951. In the Netherlands, I was placed on HR MS TROMP—a cruiser. After many years of traveling, I visited Scandinavia with a squadron of war ships. On the last day of our visit I met my wife Kika, (short for Finish name Külliki). A friend suggested we go into town, instead of sitting inside. We met two ladies and asked: “Do you speak English?”.

Long story short, she came to the Netherlands where we had two kids. When my service time was over we traveled to Finland where her mother lived in SÄÄKSKMÄKI, a small village at a big lake in Finland. After they insisted, I moved there too and found a job. I worked for three years in Tampere. Unfortunately, we had to wait a long time for a house. As we were expecting our third child we decided to go back to the Netherlands, where I immediately found a house and a job. We flew back and forth for years and we had 5 kids. After my sister from California visited us, I decided to immigrate to the USA.

However, my mother in-law did not like that. She posted ads in different newspapers that lead to me receiving a number of job offers in Sweden and a house with 5 rooms. Two weeks later, we arrived in Sweden. We’ve lived there for 54 years now. My wife and oldest daughter have passed. One son lives in Chile and another in Brazil. One son in Borås, Sweden and a daughter in Göteborg, Sweden. I am 90 years old. After four botched hip operations, I became disabled and walk around with crutches.  I live in a nice apartment with a garden.

I am happy. God allows me to live.

Much love and greetings to all in America.

Note: 29 April 2020. Translated from Dutch and interviewed for additional info by Jeff. Edited by Sierra.