FREE DOWNLOAD OF THE BOOK: FAREWELL TO THE INDIES. 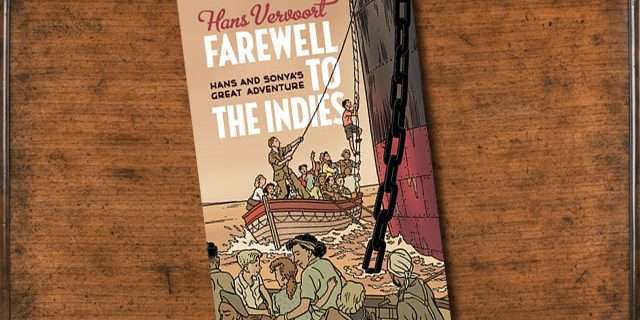 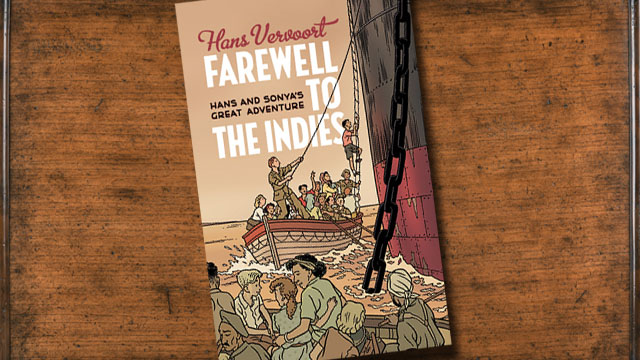 Farewell to the Indies (translation of Weg uit Indië, published in 2012 in the Netherlands) tells about the adventures of two ten-year-old children during the Japanese occupation of the Dutch East Indies in World War 2 and the ‘bersiap’ period that followed. It is written for all ages from ten years upward.

Hans Vervoort (Magelang, 1939) who wrote the book, belongs to the last generation of Dutch writers who spent their youth in the Dutch East Indies.

Knowing that a lot of Indo-Europeans have emigrated to the USA, Australia or other English-speaking countries and now have (grand)children who don’t read Dutch, he had his boek translated by Michele Hutchison, a wellknown translator of Dutch literature. And the result is free of charge downloadble on his website www.hansvervoort.nl (click on the Indo corner)

The cover and illustrations are by Peter van Dongen, wellknown for his comic books Rampokan Celebes and Rampokan Java.

Read the first chapter of the book:

The sound, which Hans couldn’t place, had been going on for a while already, but he didn’t feel like getting up and seeing what it was. The gnawing hunger had left him weak and he had spent the entire morning lying on his bed.

But then Sonya came running in. ‘An airplane!’ she shouted.

‘Under your beds!’ Granny Van Soest ordered from a few bunks further up as she groaningly led the way.

Curiosity won out and cautiously, as nervous as cats, they went outside. Granny Van Soest came out from under her bed again. ‘Don’t go far!’ she called out after them.

Outside, a whole crowd of people were already looking up in silence. A small airplane was flying through the sky, a few hundred yards up. You could see the pilot looking down and from time to time a cloud of dust fell from a hatch in the airplane’s belly. When it got lower, the cloud of dust turned out to be colourful pieces of paper. There was a gentle breeze, the bits of paper blew past the camp and landed far away. The fencing around the camp made it impossible to see where exactly they landed. No one was tall enough to look over the fence.

The last cloud which fell from the airplane was better placed and Hans saw that some of the pieces of paper landed in the roll call yard. This was an empty bit of ground where the entire camp’s population had to stand in long rows to be counted each day. You weren’t allowed there outside of roll call. Nobody dared go now because one thing was sure: the Japanese guarding the camp’s entrance could see the roll call yard and would come and beat you. But the Japanese were looking up at the airplane nervously and some of them had even raised their guns onto their shoulders to shoot it down. But no shots were fired, they could sense that it was too far away to hit. A waste of bullets. The airplane dipped each of its wings in turn, as though waving to the crowd below.

Hans saw a couple of boys running like the wind along the camp enclosure and picking up a few of the papers in the furthest corner of the roll call yard before disappearing quickly behind the kitchen buildings. It was Harry and Tys, the daredevils of the camp, eleven years old already, a year older than Hans. They had almost disappeared behind the buildings when one of the Japanese guards looked over and shouted. But at the same time Mad Jannie ran into the yard. She had once been a teacher but had gone mad in the camp. She regularly forgot to greet the Japanese in the proper way, by bowing, and would get a beating or worse. Sometimes she had to stand in the sun for hours. It made her even more crazy.

No one would have dared to openly go out into the yard and get one of those papers, but that didn’t stop Mad Jannie.

The Jap sent a help soldier after her with a short command. These were Korean soldiers, employed by the Japanese, but since they weren’t completely trusted they didn’t have real guns but wooden fakes. Still, they could deal out hard blows with them.

Just a few minutes later, Mad Jannie was on her knees in the sun next to the sentry post and for heaven knows how long.

But she had distracted the Jap long enough for Harry and Tys to escape and very soon everyone in the camp knew what was written on the red, white and blue pieces of paper which had blown down. ‘Keep your spirits up. Je Maintiendrai.’

‘What is that, je mentiandry?’ Hans asked his mother later when visiting her in the sick bay.

Usually he didn’t have anything to tell her, so little happened in the camp, but this was Big News and he’d made quite a story of it.

Mother listened with a happy smile, the malaria had made her so terribly thin he dreaded going to see her. But the smile made her look a bit more like the mother he knew.

‘Why does our queen speak French?’ Hans asked.

‘It’s an old saying,’ his mother said, ‘a long time ago all the nobility spoke French to each other. You’ll learn it at school later.’

School. Hans knew what it was, he had been to school for almost two years before the war, when he was six and seven, a long time ago. He had learned to read and write and do sums there. But then the war came and the Japanese had forbidden anyone from teaching the children in the camp.

Only Mad Jannie had been allowed to for a while, for the little ones, a nursery class. But that was before she went mad, of course.

Hans had gone to watch once. Around thirty infants were sitting on the floor and Jannie was standing in front of them, conducting as they sang: ‘Got lame hands, got lame feet… cannot walk along the street…’ They lifted their legs and flapped their hands as they sang along at the top of their voices. The nursery class was a success. When it got a bit rowdy he saw Jannie put up her hand and they quietened down at once. The children all started staring at her and Hans didn’t have to wait long to find out why. Jannie deftly pulled her top teeth out of her mouth and then her bottom teeth and made the two parts of the set clap together. Tick tick tick you heard, a dry sound.

A couple of children screamed as Jannie advanced forwards, clicking the false teeth.

Her cheeks had sunk in and because she involuntarily moved her own jaw along, it looked as though she was making her teeth go up and down by remote control. Hans found it terrifying and he knew about false teeth. Imagine how frightened the infants were, seeing something like that for the first time!

When he told his mother what he had seen later in the day, she gave him a surprised look.

‘That’s crazy,’ she said, ‘I’ll put a stop to that.’ Before she became sick, Hans’s mother had been a determined woman and she told the camp elder that Jannie was frightening the children. That was the end of the nursery class and the beginning of Jannie’s increasingly loony behaviour.

When he returned from the sick bay he saw her still kneeling in the burning afternoon sun at the Japanese sentry post.

But Mrs. Anema, the camp elder, was already talking to the guards and she usually managed to get someone being punished set free after a couple of hours. And of course the Japanese had also come to realize that Jannie was as mad as a hatter by now.