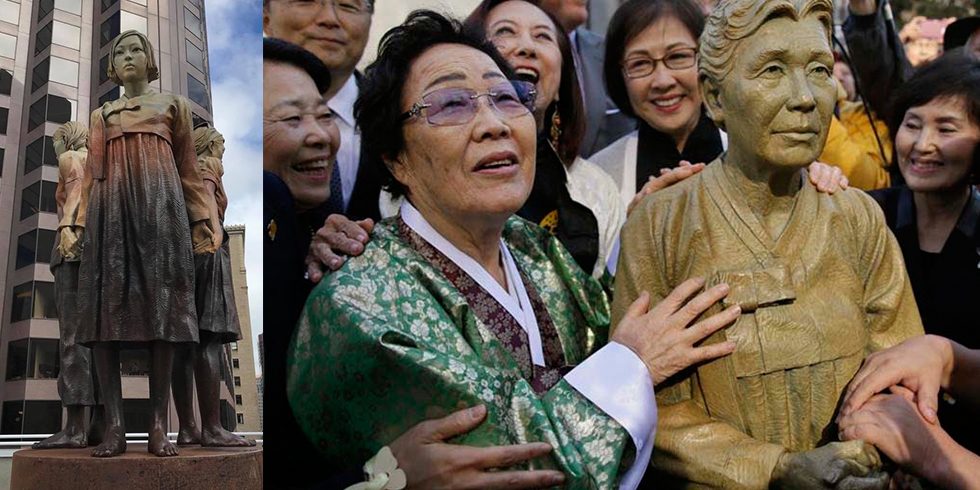 When statues in this country have become a point for debate with Civil War generals coming down, a new statue in the heart of San Francisco went up on September 22nd. Sadly, controversy swirled around this statue, too, even though it commemorated a completely different war.

It’s interesting that most Americans know about Pearl Harbor and the dropping of the atomic bombs but what happened in between those two cataclysmic events is something that hasn’t fully entered the American public consciousness.

WWII in Asia has always played second fiddle to the war in Europe, even though Japanese fascists plundered, tortured, raped, imprisoned and starved local populations with the same fervor and fanaticism as the Nazis. However, and curiously, when you Google Japanese internment camps, the injustice of FDR’s internment of Japanese-Americans pops up first before you read anything about the Japanese internment camps all over Asia.

From the latter camps, and outside of those camps, the Japanese Imperial Army abducted hundreds of thousands of women and girls (some of them barely having entered puberty) and locked them up in soldiers’ brothels where they would “service” many soldiers on a daily and weekly basis. The majority did not survive this ordeal. It was state-sanctioned rape, the largest sex slave operation sanctioned by any country in recent history. It was “comfort” for the soldiers, but “hell” for the victims as one survivor would say. 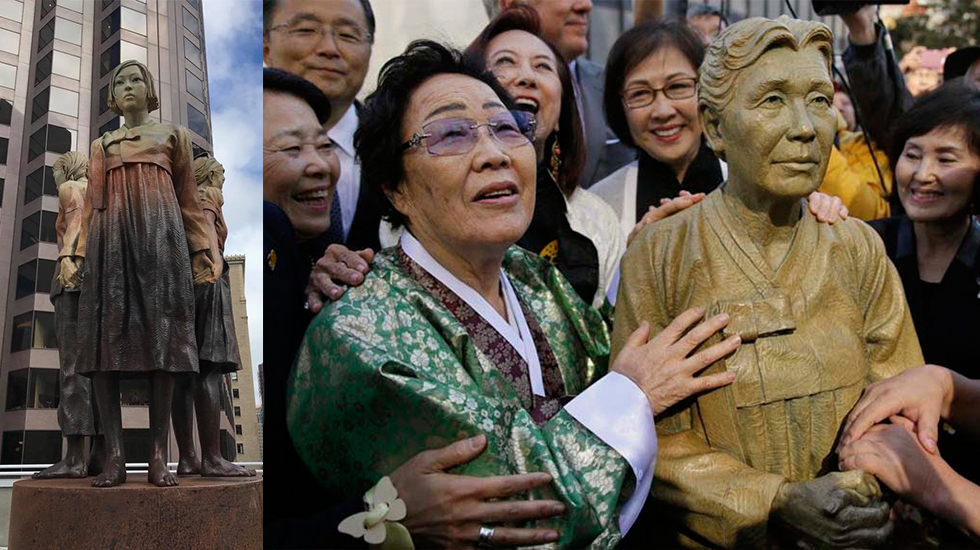 Over the years, Japan has, on occasion, apologized for WWII atrocities but the comfort women issue lingered in the shadows for a long time, until, in the 1990s, the first women started speaking up.

Why so late you ask?

Imagine being a survivor yourself and meeting your husband after the war and having children. Many could not and would not share this horror of their past with their husband or children, let alone the world. In that sense, the Japanese committed the perfect crime. When the first women did come forward, they were smeared by Japanese conservatives for not telling the truth. Some would argue: they were in brothels, so they were whores and you can never trust the word of a whore.

In reality, more than 200,000 women from more than 11 countries had been sex slaves and recent research has shown that that number may actually be closer to 400,000 as not all of the Chinese victims have been accounted for. Note also that there were Japanese comfort women, too, as well as “comfort boys”.

When the Comfort Women Justice Coalition, led by the indefatigable Phyllis Kim, and retired judges Lilian Sing and Julie Tang, got the green light from the city of San Francisco to build the Comfort Women Memorial in the city in 2015, th
ey gathered a multinational coalition (including Japanese-Americans) to make this happen. The memorial, they insisted from the beginning, was about world peace and remembrance, as well as a reminder that sadly, the sexual enslavement and rape of women occurs every time when a war breaks out or a global conflict erupts.

During the two years that they raised the money, they were attacked and belittled by a Japanese lobby and representatives of the Abe government. On the eve of the unveiling, the Japanese consul wrote a damning piece in the San Francisco Chronicle. He didn’t only have the nerve to object to this memorial because there was no “credible evidence” to its backstory, but he also inferred it was an attack on the Japanese people,  whom, he felt, “were singled out”.

Grandma Lee, a Korean survivor who became the figurehead of the Comfort Women Justice Coalition and who was abducted at 15 to be forced to have sex with about 5 men every day while in captivity, insisted at the ceremony once again that this was not an attack on the Japanese people. “We all share the same humanity,” Yong-soo Lee said.“This is an issue for everyone.”

Many state and city officials, with among them Congressman Mike Honda and the brother of Governor Jerry Brown were there to underscore grandma’s Lee call for a common humanity and emphasized this was a human rights issue, yet the vibe of controversy will not go away as long as the government of Japan continues to argue that it didn’t happen, or only happened on a small scale. For that reason and diplomatic relations with Japan, many of the consuls of countries whose subjects had fallen victim to this crime against humanity simply didn’t show up.

The Indo Project was there though to show its solidarity: our newsletter editor Linda Kimbrough was interviewed by one of the Korean newspapers and our TIP Ambassador, Ingrid McCleary showed up, too, to make pictures we can share in our Facebook group.

Due to the denials by Japan of the comfort women crime, the dark story of these women was, of all the Japanese atrocities that were committed in Asia during WWII, one of the last to surface and get public attention. The city of San Francisco put this story front and center by placing a beautiful memorial in the center of town on St. Mary’s Square, near Chinatown. By doing so, San Francisco said to the rest of the world: war memorials should be about the victims, not the generals…