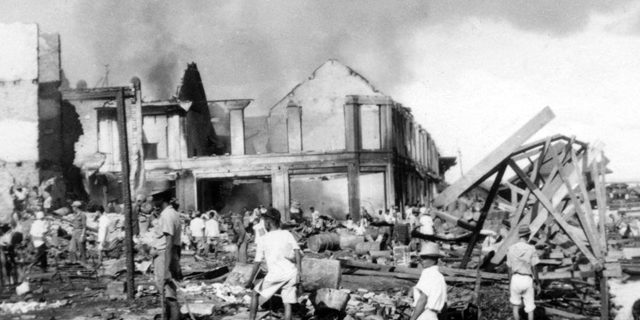 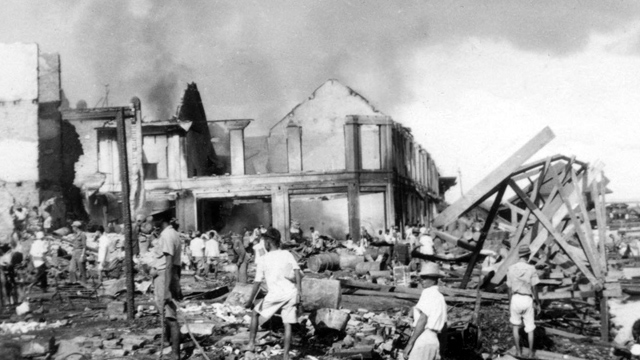 Who will now help our own refugees?

Translated from an article in De Haagsche Post published on 4 December 1954. Translated by Kareen Richard.

For a short time the end of the Japanese dream of power seemed to mean liberation for the Dutch and Indo’s in the Far East. That illusion did not last long. The Dutch East Indies were indeed liberated from Japanese domination but another, even more hostile power stood in the wings, ready to declare itself heir of the Japanese reign.

How all this came about is known now, and some weeks ago Mr. Gerbrandy used his knowledge to explain an unclear facet in this publication. At that time the old – incorrect – controversy reappeared. This publication has often argued that after the war, the issue at hand was not the choice between the continuation of the old colonial system and Soekarno, but rather about the correct interpretation of royal language in which the Dutch intentions were described.

Everyone knew that enormous changes were in the works and everyone was prepared for them. There was, however, a group that maintained that authority in the Dutch East Indies should not be suddenly handed over to inexperienced insurgents. It is now common knowledge that this did, indeed, occur.

Soekarno’s reign no longer has any supporters in the Netherlands, not even among the most progressive circles. The terrible consequences of his misguided politics are well-known and many groups must pay a heavy price. At this time our interests lie mainly in what this state of affairs means to our Indo’s.

The Vendetta
Once Japan had capitulated and it was forbidden for us (Dutch) to set foot on the shores of the Dutch East Indies, a vacuum of authority arose. Oil was thrown on top of the embers of Indonesian hatred against belandas (Dutch) which hatred had been diligently sowed by the Japanese during their three-and-a-half year occupation of the DEI. Buccaneers, robbers, sadists and criminals gathered behind the flag of extremism and adulterized honest nationalism by seeking bloody revenge. In particular, they turned fiercely against our Indische-Nederlanders.

“The Indo-Nederlanders are bloodhounds,” so began one of Boeng Tono’s notorious addresses to the extremists in Djogjakarta on November 24, 1945.

“Torture them to death, eradicate those watchdogs of colonialism down to the root, before they escape to Irian (New Guinea) from where they – as unadulterated lion cubs of the imperialistic Netherlands – intend to build a springboard to recapture our beloved fatherland. For 300 years they have emaciated our country in order to fill the coffers of a white queen. But now Allah has announced the hour of revenge. Brave warriors of Indonesia, countless generations of oppressed ancestors are looking down on you. Their undying spirits require revenge from you. Vendetta!”

The raging crowd stripped fields and looted villages, looking for victims, and started a massive amok against the Indische-Nederlanders while in the mother country victory celebrations and thanksgiving services abounded.

These victims were defenseless. They were the Indisch-Nederlandse women and children, malnourished and without male family members who had been interned by the Japanese.

The excessive cruelty even filled the Japanese with horror. The human remains of hundreds of mutilated women and children came floating down the large rivers, nailed to rough wooden crosses. During this time of uncertainty not much attention was paid to this excessive cruelty. People do not really want to read about this type of news.

It was terrible. It was far worse than people in the Netherlands would ever want to believe. Those who experienced it are still reluctant to speak of it.

The English soldiers did nothing to stop it.

This most awful period began to see its end when Dutch rule started to be restored in wider circles.

It is known that through the actions of some foreign powers and powerful Dutch the so named Politionele Acties (police actions) had to be stopped. What, in reality, was the liberation of a country of criminal guerillas, was denounced and condemned as a colonial war. That means that authority in the Netherlands-Indies would fall to a small group who supported extremism. And that word extremism has to be taken in most literal of meanings. They were not extremists in their thoughts, but all the more in their deeds.

No More Room
From the time of the Japanese capitulation until now the fate of the Indische-Nederlander in Indonesia is miserable. Many sought salvation in the mother country; many tried to adapt themselves to new circumstances… but that would never really succeed, because in Soekarno’s republic, there was no room for them. Some made it to New Guinea. A small core would attempt to create an asylum for Indische-Nederlanders there. Wherever they found themselves, nowhere would they receive the support of the Dutch government, which they would be able to claim. The Dutch government refused to make New Guinea a new home for them. In 1953, the Dutch congress rejected the Lemaire motion which would make it possible for the Dutch government to pay for the travel costs for all Indos who wanted to repatriate to Holland.

The group in New Guinea feels uncertain. Many are preparing to travel again to make use of the possibilities offered by Brazil. 100,000 are still in Indonesia. Their lot is miserable. They are hated. This probably means very little to Dutch people because they don’t know what it is to be hated by an Oriental.

Once they are no longer part of the workforce, poverty awaits them. The Dutch High Commissariat supports the jobless Indos, but it is unfeasible in a country with high inflation. What would an Indo couple do with 200 rupiahs per month when a pair of shoes cost 90 rupiahs and a kilo of meat 24 rupiahs?

The High Commissariat offers little support, in money or otherwise.  The Indo can hardly complain because the Dutch also receive little aid. In the Netherlands one tends to keep quiet and ignore this.

For too long…
These circumstances cannot last forever. The Dutch people need to know and understand that avoiding the situation can no longer go unpunished. After all, these people are our fellow countrymen.

Let the painted picture speak for itself. Today, it is just as current as it was yesterday and people in the Netherlands don’t like to hear it. Every description of the misery facing the Indos casts a stain on the Indonesia (foreign) policy of the current (Dutch) government.

The government would rather turn its attention to Eastern European refugees. An Indo says, “It is indeed curious that the Dutch worry so much about the scratches on someone else’s skin while ignoring the festering sores on their own body.”