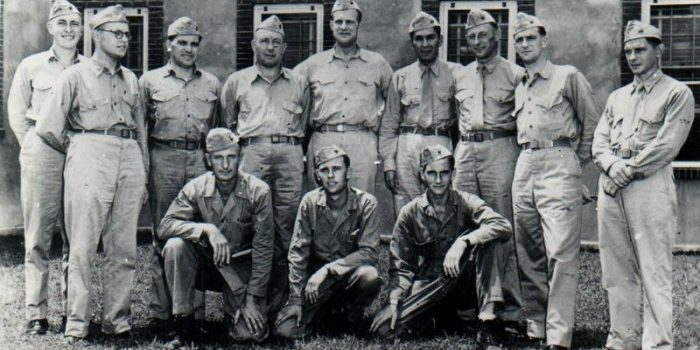 This story is a hidden gem in the history of Dutch-American military relations surrounding WWII.  I had the good fortune of finding this organization and talking with Mr. James E. Stewart Jr.  who has graciously agreed to share this photo and background information.

Why is Camp Lejeune, Montford Point significant ?  It is also the place where the Dutch military intersected with the Americans.  In December of 1944 Royal Dutch Marines arrived at Camp Lejeune for training.  Their homeland was destroyed under Nazi occupation and they had no place to drill.

The Netherlands Marine Corps is over 280 years old.  Disheveled and disorganized from the European war zone, they had to reorganize and train in preparation to go to the East Indies.  Since Holland was under Nazi occupation, they had no training facilities so they came to the USA.  The Royal Dutch Marines were the first complete military organization trained on American soil.  Their commanding officer was Lt. Col. L. Langeveld.  The men consisted of officers and non-commissioned officers from the old Netherlands Marine Corps, the Netherlands Army in the Indies, air units of the Dutch Army and Navy.  Their amphibious training operations were similar to the Americans.  They were to train and model their reformed corps as the U.S. Marine Corps. They held the same privileges and had access to the base facilities and services.  They wore U.S. issued uniforms with Dutch buttons and insignia.

The Dutch marines settled in Hadnot Point, an all-white camp.  The American marines at Hadnot Point for whatever reason picked on and fought with the Dutch marines.  Finally, the commanding officer had to move them (the Dutch) to Montford Point camp, a segregated camp for Blacks.  The Dutch marines were fully accepted as brothers by the Blacks.  Friendships grew as they were invited into their homes and they went on picnics and outings with the Black marines and their families.  They finished their training about a year later and went on to the East Indies.

Names of some of the Dutch Royal Marines:

Editor’s Note:  In 2008 Dutch Royal Marines trained again at Camp Lejeune in preparation for deployment to Chad, Central Africa to provide aid to Darfur refugees.  It is said Camp Lejeune is kind of a spiritual home for them.