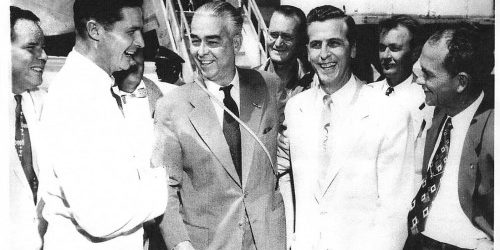 Heroes are lost in the annals of history.   Doc Hekking and the incredible bond with his fellow POW’s  is an inspirational story that awaits rediscovery in the Indo community and beyond.

The boys from America

Overshadowed by America’s presence in the Philippines and Japan, the role of Americans in the Dutch East Indies and the greater Pacific is often overlooked. Doc Hekking’s story is testimony to the fact that Americans were Japanese POW’s. How did they get there ?

The Battle of the Java Sea

In the Sunda Strait, which connects the Java Sea to the Indian Ocean, the Japanese torpedoed the USS Houston (CA-30), an American heavy cruiser.  It was 28 February 1942.  She was part of the (ABDA) American-British-Dutch-Australian naval force.  As their ship went down, the surviving men swam ashore only to be captured by the Japanese on the island of Java.  This 7-hour battle became known at the Battle of the Java Sea. The men from Texas later came under Doc Hekking’s care in a Japanese labor camp.  Together they were transferred from the Bicycle Camp (base of 10th Battalion Bicycle Force of the Netherlands East Indies Army) in Batavia, then shipped to Changi (Singapore) and in October of 1942 on to the Burma-Siam Railway.  The USS Houston (CA-30) was later termed as the “Galloping Ghost of the Java Coast”.

I was drawn to the American prisoners because they joked a lot in spite of their situation – spoken by Doc Hekking at a reunion with former American POW’s to whom he was assigned.  He was often referred to as the Jungle Doctor because of his knowledge of medicinal plants and their application.  His unit had zero loss of limbs and also had the lowest death rate.

A product of the former Dutch East Indies, Henri H. Hekking was born on February 13, 1903 in Soerabaja on Java.  At the tender age of 4, young Hekking was sent to his grandmother’s house when he contracted malaria.  This grandmother came to the Indies from Zeeland, a province of the Netherlands, where her interest in healing plants originated.  She lived in Lawang near the edge of the woods and had a large nursery of plants, vegetables and herbs.  She was a master herbalist.  Twice a week she would tend to the sick in the native kampongs.  Under her guidance , the young Hekking learned about medicinal plants and their application for all kinds of diseases.  In this environment, he decided early on that he wanted to be a doctor.

Later in life, he obtained his medical degree from the University of Leiden on a government grant in exchange for 10 years of service in the medical corps with the KNIL – the Royal Dutch Army.  The first 6 months of service on Java was an intensive course of tropical diseases.  With this combined knowledge, he later was able to save  the lives and limbs of his fellow prisoners of war. 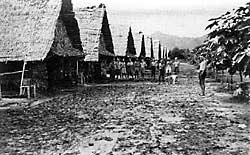 A Beacon of Hope

Besides his skills as a physician under the worst conditions, Doc Hekking had a great sense of humility and humanitarianism.  He knew that his patients needed hope, something to live for, otherwise they simply gave up. In the depths of hell, he kept their spirits up and  recognized the significance of psychology in the healing process.  When the men praised and thanked him, he turned it around and praised them. Doc Hekking stated that it was” their”  friendship that kept him going and made him feel worthy.  Anyone who has been in the trenches of war together understands the depth of this kind of brotherhood. This bond lasted a lifetime.

In the Congressional Record, November 18, 1983 a tribute was made to Dr. Han Hekking for his heroic efforts in saving the lives of Americans prisoners of the Burma-Thai Railway.  He is hailed by Americans as a hero, yet little is known of him in the Netherlands. His name is in the official U.S. Congressional Record, Proceedings and Debates of the 98th Congress, First Session, Vol. 129.  In this record one of his patients, Otto Schwarz is quoted, “…..he is not a mere physician.  His practice of medicine, under the worst conditions was not restricted to the attempt to heal the physical body; it also brought out his ability as a psychologist, to somehow treat the mind, spirit, soul of those prisoners of war who had little or no reason to be confident about the future.”

Since 1956, the “boys” from Texas have held reunions with fellow ex POW’s. Each time, they passed the hat around to make it possible for Doc Hekking to come from Holland with his wife.  Each time, they embraced wholeheartedly at the airport as they saw “Doc”.

On January 28, 1994 Dr. Henri H. Hekking passed away in Holland after a long battle with cancer.  His “boys” were at a loss for words of how much he meant to them.  He was an expert jungle doctor who saved their lives and became an endearing father figure and great friend.

We salute you Doc Hekking and we honor your memory.

Editor’s Note:   Because the original POW survivors are dwindling in numbers, their adult children (the next generation) are carrying on their legacy.  They have formed an association based out of Texas called the Lost Battalion Association and the USS Houston CA-30 Survivors Association & Next Generations.

UPDATE: February 10, 2020; Added to this post are family history charts for the Hekking family, which were completed in 2015, answering the questions posted in 2014 by Robert Newland.